Nature: Sacking of Thybo the result of a harmful UCPH corporate culture 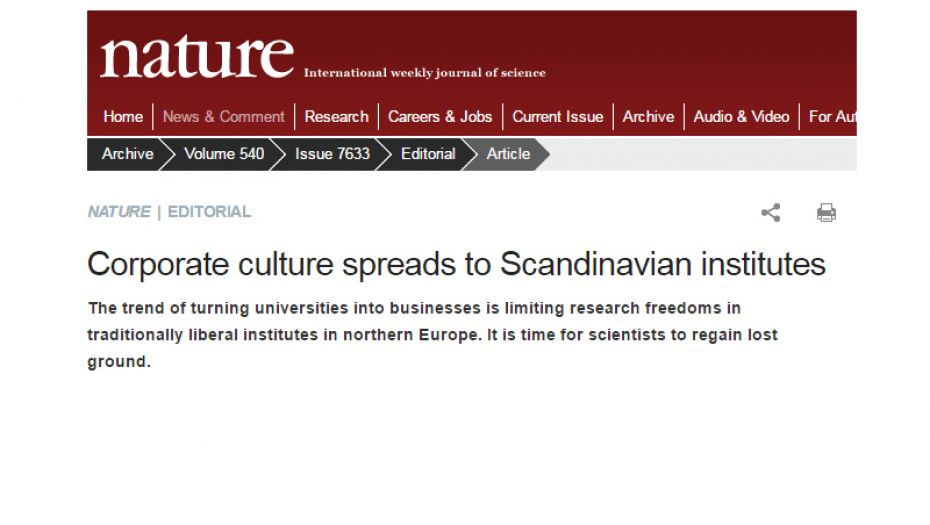 The good news is that University of Copenhagen is in the journal Nature again. The bad news is that it is in the form of a leading article that slams UCPH for the sacking of Professor Hans Thybo

“Denmark’s leading university risks a nose dive in its international standing, unless it is able to submit more convincing reasons to part with one of its best researchers.”

So an editorial on 14th December in the world’s leading scientific journal Nature concerning the Faculty of Science at University of Copenhagen’s (UCPH) decision to sack the geologist Hans Thybo.

Postdoc: “Thybo did not put pressure on me”

This time Nature writes – and this is the journal’s official view, expressed in an editorial – that a type of corporate culture has taken hold of Scandinavian universities to the detriment of research and good university management. And this corporate culture is according to Nature behind the decision to fire Thybo for reasons that Nature refers to as ‘petty in the extreme’

“… His unquestioned success in solid Earth science — funded, among other sources, by the oil and gas industry — failed to impress research managers who were apparently more concerned about his style and personal idiosyncrasies,” writes Nature.

All result of Danish University Law

Nature describes the Thybo case as an institutional problem, whose core is an amendment to the Danish University Law of 2003, which meant that Danish universities got boards controlled by a majority of so-called external members who are not themselves academics.

These new managers are, according to Nature: “robbing researchers and students of the chance to decide on the matters they know best, the resulting hierarchical governing structure has raised real and repeated concerns over the freedom of research.”

(In the UCPH case, the claim of a board led by non-scientists, however, is not quite true, as the external members are better educated than the internal ones. Four (of the six) external members have research degrees, either a PhD (equivalent) – or higher doctoral degrees (the chairman is Dr.med.). And one of the board members, Kari Melby, is Prorector for Research at the Technical University in Trondheim, Norway, while Novo Nordisk director Mads Krogsgaard Andersen has been an adjunct professor).

As for the University of Copenhagen’s reputation, a leading research media such as Nature only needs to claim that the reputation is declining to make it a fact.

Editor of THE-university rankings Phil Baty confirmed on 12th December to the University Post that controversies as the Thybo case can push UCPH down the rankings of the world’s leading universities.

Part of the calculation behind universities’ relative rank is based on assessment from scientists around the world. This assessment may well depend on what they read in Nature.

UCPH and Hans Thybo are currently negotiating an amicable solution to his dismissal case.

The University Post has contacted Nature to ask for a more detailed reasoning behind the link between the law and the Hans Thybo dismissal case.