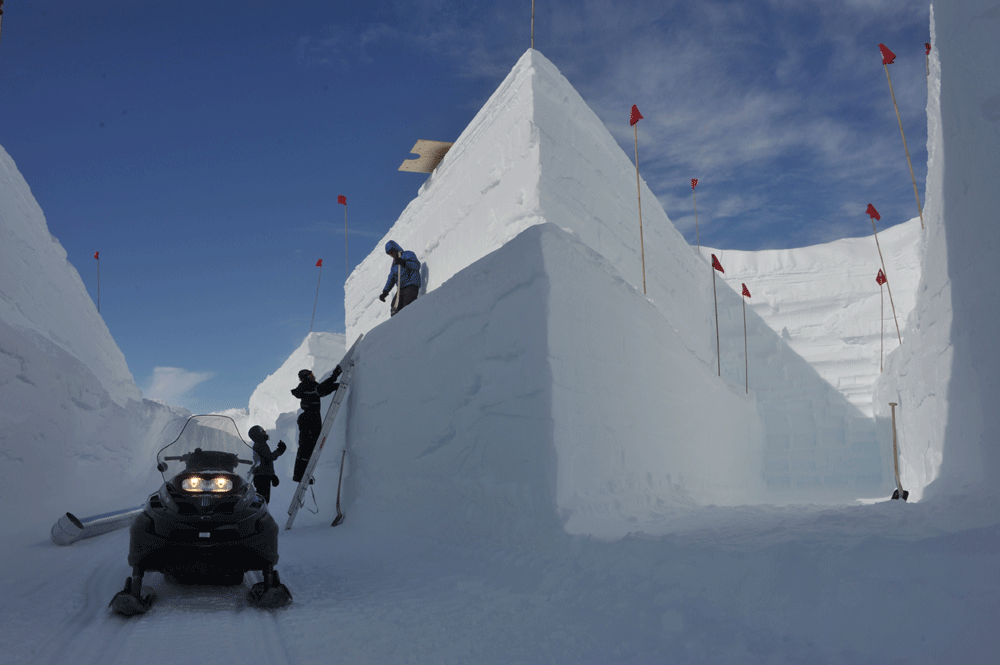 The summer season has scientists trying out a host of new logistical techniques on the Greenland ice cap
image: Sepp Kipfstuhl, Alfred Wegener Institute for Polar and Marine Science, Germany

It is the summer season for scientists on, and below, the Greenland ice sheet

Last year, a small team led by University of Copenhagen researchers travelled more than 450 kilometres across the Greenland Ice Sheet. They moved more than 15 tonnes of equipment and the goal was to establish a new ice core drill camp on the northeastern part of the ice sheet.

This year, a logistical experiment that is almost as curious is taking place in the new camp. The experiment involves large balloons and – of course – a lot of snow.

Life on the ice sheet

The field season starts mid-April and ends in mid-August. During 2016, more than 70 researchers and support staff will have passed through camp. Most people stay for 3-4 weeks – others for up to two months.

Once the camp is constructed, we live quite comfortably. Although temperatures outside, typically, are between minus 20 and minus 15 degrees in the summer, when there is little wind it can be pleasant to be outside. We also have a heated main building (The Dome), that contains our kitchen and dining area, a lounge and what we call a ‘penthouse’ room, from where the field leader can direct incoming flights and report on the weather.

The large Pisten Bully vehicle is fitted with snowblowers and the construction of the ‘trenches’ begin. The ice core will be drilled in the trenches, and they will also contain the processing areas and laboratories. A natural cold room! (Photo: Sepp Kipfstuhl, Alfred Wegener Institute for Polar and Marine Science, Germany).

Sleeping quarters are outside in tents, but they easily go above freezing on sunny days. The dome also contains a shower, and everyone is encouraged to shower once a week for the Saturday dinners – as long as you shovel snow into the melter first. The hot water and heating is generated by the surplus heat coming from the large diesel generator that supplies the camp with electricity.

Up on the ice sheet – looking down with a radar

An extra luxury is the inside toilet. But it is for liquids only! All other business must be conducted in the outhouses outside: small yellow tents erected over a deep hole and fitted with what is affectionately referred to as ‘a throne’. The most important part of this set-up is the flag outside the outhouse. Flag up means occupied, flag down means free: and woe the person who forgets to take the flag down!

Waiting for the toilet tent to be free, dome in the background, generator to the right.(Photo: Nanna Bjørnholt Karlsson )

The goal of EastGRIP (East Greenland Ice Core Project) is to drill through the largest ice stream in Greenland: The North East Greenland Ice Stream. When drilling an ice core it is convenient to set up the drill in a place that is sheltered, so that the drilling operation is not hampered by bad weather.

It is also best if the ice core is handled in areas where the temperature is not too high. The obvious solution is to dig out caves under the surface of the ice sheet. They provide both a shelter for the weather and a natural cold room. At previous camps, the underground caves or “trenches” have been constructed with wooden beams as a ceiling.

However, after several years of snowfall the beams will start to collapse under the weight of the snow that falls every year.

This year, we have used a different and completely new approach to building our trenches: very large balloons. The construction process is quite simple although like all polar fieldwork it is also hard work.

Next stage: The big balloons. All hands on deck for inflating the balloons. (Photo: Sepp Kipfstuhl, Alfred Wegener Institute for Polar and Marine Science, Germany).

How to make a lab in the field: Very big balloons covered in snow are used to make caves. A natural cold room! pic.twitter.com/O31kxAs9vB

After a bit of tidying up, the caves can be outfitted with drills, equipment and other necessities. The shape of the balloons means that the roofs will be dome-shaped, which is a much more stable configuration than a flat roof: it will take a lot longer for the dome-shaped roof to collapse under the weight of new snow.

The cavities that appear once the balloons were removed. (Photo: Sepp Kipfstuhl, Alfred Wegener Institute for Polar and Marine Science, Germany).

And the environmentally-friendly part?

Transporting material into the middle of an ice-sheet is an expensive process that is done via aircrafts fitted with skis. The heavier the material the more fuel is needed for the transport.

The wooden beams that we used in the old camps are heavy and therefore require a lot fuel to transport. On the other hand, balloons are substantially lighter, can be reused for building new trenches and are not left behind as waste. An ingenious solution to a very unique problem!

What will I be doing?

I was part of the traverse last year and I am looking forward to going back to camp. This year there will be a be a lot less snow to shovel and also running water in the dome. Luxury! More than anything, I am excited about a new science experiment that I will be doing. Together with scientists from University of Cardiff and University of Bristol, UK, we will be testing an innovative, wireless sensor.

It is a hard life being a polar scientist. Fortunately, the balloons double as an air mattress for Malte (CIC). (Photo: Sepp Kipfstuhl, Alfred Wegener Institute for Polar and Marine Science, Germany).

The sensors can be in the palm of your hand and they measure temperature and pressure in high resolution. They were developed for monitoring the meltwater at the margin of the ice sheet, but for the first time, we will deploy them in the snow in the middle of the ice sheet.

This means digging a 2 metre deep hole and then drilling a further 10 metre down to drop the sensors. The low temperatures will undoubtedly present some challenges for the sensors, but if successful, we will get detailed information about what is happening in the snow during a summer season.

See more fascinating pictures in the photo gallery below.