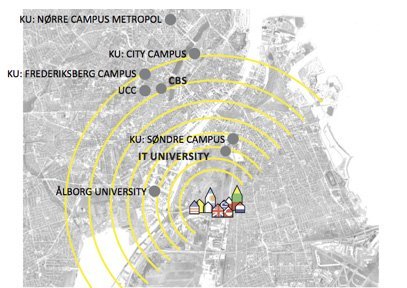 City within a city for Copenhagen's international students, if a new construction can attract the financing

The project is the latest in a series of projects that attempts to come to terms with the dire housing situation for international students, and make Copenhagen a more attractive city. A similar and just as ambitious project by ThinkTankTalent announced in 2010, that aspired to use the old Carlsberg brewery buildings and with a several billion kroner price tag, has failed to find financing.

The new project, going by the name of International Student City of Copenhagen (ISCC) has absolutely nothing to do with the Carlsberg project, says Jørgen Rossen, one of the project’s founders.

It aims to accommodate 5,000 students from 50 different nationalities. It should be in a central location with metro/train facilities nearby.

The project leaders have zeroed in on a 150,000 square metre plot of land on the corner of Vejlands Allé and Ørestad Boulevard, near Sundby Metro station.

»We are in this period ,winter 2012 -2013 expanding our communications and contacts with the countries, such as Sweden, Norway, Italy, France, China, Finland in order to get support from commercial companies and organisations from these countries operating in Denmark«, says Rossen.

»We hope the government and the Copenhagen City Council will see and make projections for the big economic and cultural impact ‘The International Student City of Copenhagen’ will have for Copenhagen, the region of Øresund and Skåne, Sweden.«

»If they donate the land needed at Sundby Metro Station, then… foreign countries, their philanthropists. and these countries’ foundations will more easily find economic means to invest in Copenhagen for their students here in Copenhagen,« adds Rossen.

The initiative is supported by Henning Larsen architects. The seven founders include Jørgen Rossen, an architect, a Danish ambassador to France, a former foreign minister (Per Stig Møller), a businessman, a high court lawyer and a professor.

»The project will start when a Danish foundation has agreed to ﬁnance the building of ‘The International House’ and at least five foreign nations have agreed to the building project. At least 50 nations will be invited to participate in this project«, states their website.

The Humanities of the Future

UCPH humanities faculty to slash student admissions by 24 per cent