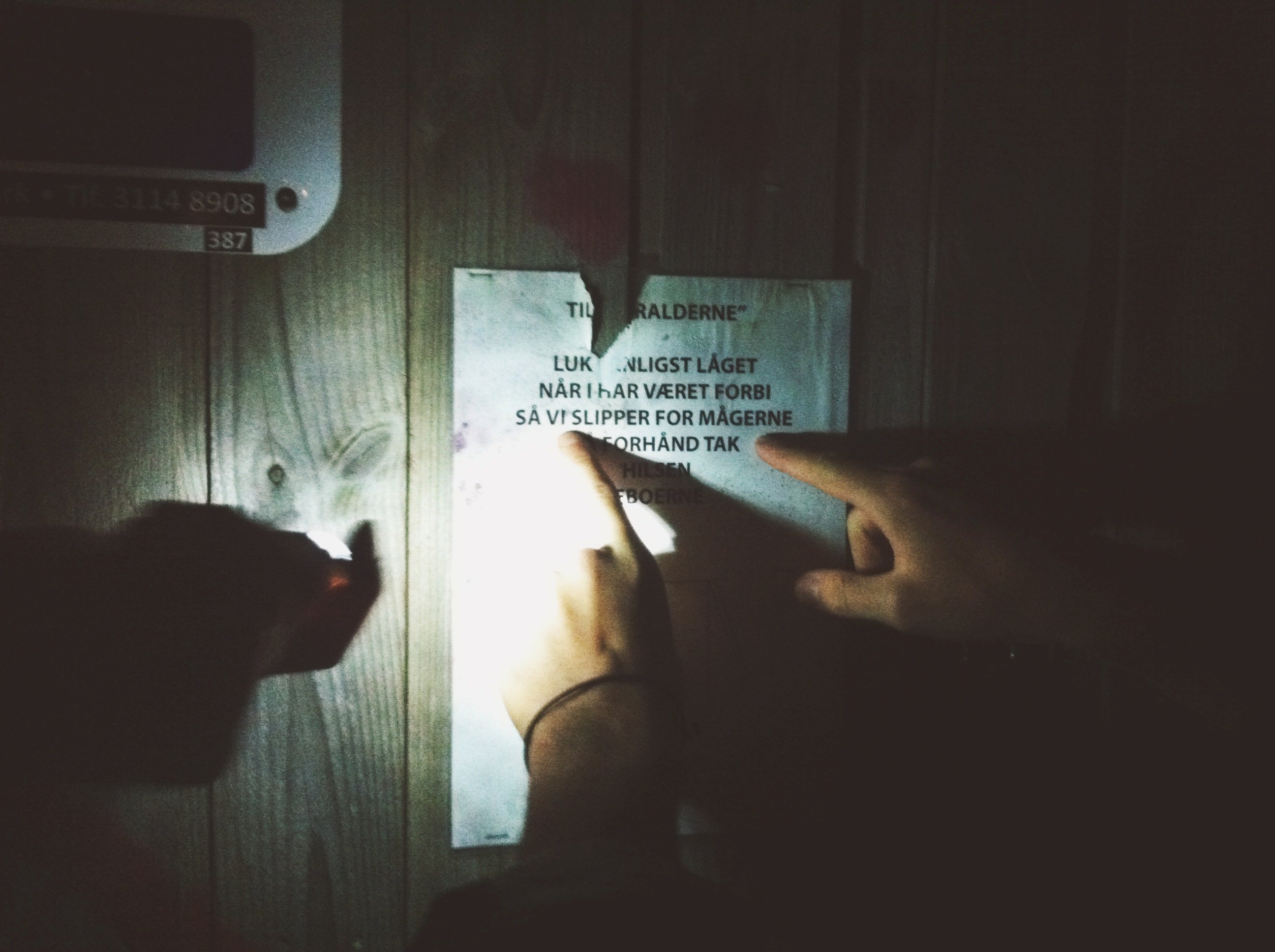 The notice says: "Please close the lid when you have been here, so we don't have a bird problem. Thanks! The local residents"
image: Grace Huck

The University Post joined a group of students taking food from supermarket bins. We found a new way to reduce food waste and eat cheap

Searching supermarket bins for food, commonly called ‘dumpster diving’, has been a pastime of green living advocates and students for many years.

People turn to dumpsters for food to reduce the cost of daily living, to fight consumer waste, to live sustainably. And for some it is simply an interesting thing to do on the way home from an evening out.

“We live in a society of mass consumerism… dumpster diving is a way to fight against that and push my own boundaries to see what I am and am not okay with” says Alice, a first time dumpster diver and student of history at the University of Copenhagen.

At 22:00 on a Thursday night, a small group of students meet near the Frederiksberg metro station. Some are experienced dumpster divers, while others are trying it for the first time. Everyone is equipped with torches, as well as bags to carry home any food they find.

Dumpster divers will generally visit several spots in one night. Some supermarkets are known as reliable places to find certain foods types, such as bread and baked goods. There is a social element to it too, as dumpster divers exchange tips about where the best food can be found, or which bins have been locked up.

“To be honest, it’s less a political statement against consumerist society, because we’re not creating any publicity during our dives in the dark. It’s more about making use of an absurd system, sharing food and saving money,” says Julian, a student of sociology at the University of Copenhagen.

Read our guide How to stop throwing food away.

The most common foods in the city dumpsters are bread, fruit and vegetables. And dumpster diving regularly for these essentials is a way to substantially reduce the cost of living.

“Last night would have saved me about DKK 150. If I did it every week I could see myself saving that much as a minimum, but perhaps more depending on what is in the dumpsters,” says Alice.

Dumpster diving is not generally illegal in Denmark unless it results in damage to property or is trespassing. Despite this, the major supermarkets such as Fakta and Irma, are all surprisingly difficult to speak to about the matter. The University Post was re-directed continuously in spite of repeated requests for comment on this article. And most supermarkets will lock their bins, or take other precautions to prevent dumpster diving. The standard argument is that the supermarkets can’t guarantee health and safety.

Sometimes, however, dumpster divers are able to find supermarkets that have accepted dumpster diving as part and parcel to the problem of food waste. At one spot on the groups’ visits, Éamonn, a masters student at the University of Copenhagen points out a sign in Danish that asks people to make sure that no food is left outside the dumpsters.

From the perspective of dumpster divers, as long as they are respectful of the property of the various shops that they visit, what they are doing is really no harm to anyone. “I really don’t think anyone cares, and why should they?” says Éamonn.

To avoid attention from the major supermarket chains, dumpster divers have developed their own ‘dumpster etiquette.’ If considering dumpster diving, these are just a couple of rules that should be followed.

Dumpster divers are careful to return all food they do not take to the bin. Leaving a mess can cause pest infestations, while staff complaints about mess can lead to the bins being locked, preventing dumpster divers accessing the food. “Some people just don’t know how to behave,” says Bahne, a student at the University of Copenhagen.

Generally, dumpster divers don’t take more than they need. Though the large amount of food thrown out in the dumpsters of major supermarkets is overwhelming, there are often many people who will visit the same bins. Some of them rely on dumpster diving as a source of food. The phenomenen attracts all ages. “There is a guy at my Netto every night around 65-70 years-old,” says Julian.

Read: From supermarket to trash can.

A solution to food waste?

Food waste is a well-known issue, especially in well-developed countries, yet many people are still unaware of the extent of the problem. Findings from a 2009 study for ‘Save Food’ estimate that between 95 and 115 kilograms of food is wasted per capita per year within Europe and North America. Could dumpster diving be part of the solution to this problem?

Most dumpster divers will cite sustainability as part of the reason for taking food from bins. As a sub-culture, dumpster diving is centred on the ethic of waste minimisation. However, they do not claim to solve the problem of food waste.

“Giving to homeless shelters, better measurement of demand so it meets food production, discount section of food going/gone bad, composting” – Éamonn offers me some of his solutions to this global issue. Until food waste can be better managed, however, dumpster divers will continue to take food – an interim solution to a much larger problem.

Read also our guide to soup kitchens in Copenhagen here.