Nobel prize winner Moser on how the brain navigates 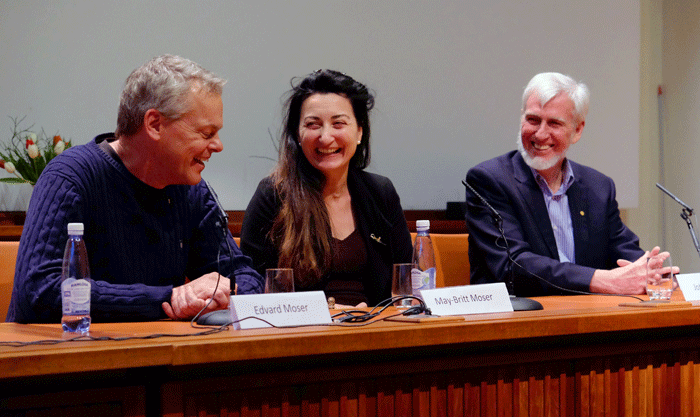 One of the world’s top neuroscientists is in Copenhagen, and she will be giving a talk Tuesday 19 April at the Royal Library.

In 2014 Dr. May-Britt Moser, her former husband Edvard Moser and her mentor John O’Keefe, were jointly awarded the Nobel Prize for their work on spatial navigation and the grid cells responsible for creating the positioning system in the brain. On Tuesday, you can hear May-Britt Moser speak about this research.

Dr. May-Britt Moser is a Norwegian neuroscientist and psychologist and is currently the head of department at the Centre of Neural Computation at the Norwegian University of Science and Technology. She has spent the past two decades studying how the positioning system works in the brains of mammals.

Could be key to preventing Alzheimer’s

The way the grid cells map out the environment is similar to an internal coordinate system. May-Britt and Edvard Moser accidentally discovered these grid cells when they noticed a pattern of activity in the part of the brain called the entorhinal cortex while studying the hippocampus in rats moving around in a room.

Recent evidence from brain imaging and patients undergoing brain surgery indicates that these grid cells also exist in humans. Understanding how these specialized cells work together, resulting in higher cognitive functioning, could be key to understanding memory and planning. Such breakthroughs could even be influential in preventing degenerative neurological diseases, such as Alzheimer’s disease, in the future.

The event will take place 19 April from 16:00 to 18:30, at The Royal Library, ”Diamanten.” Following the lecture, the audience will be invited to a reception. The event is free but nearly full. To attend, register here.