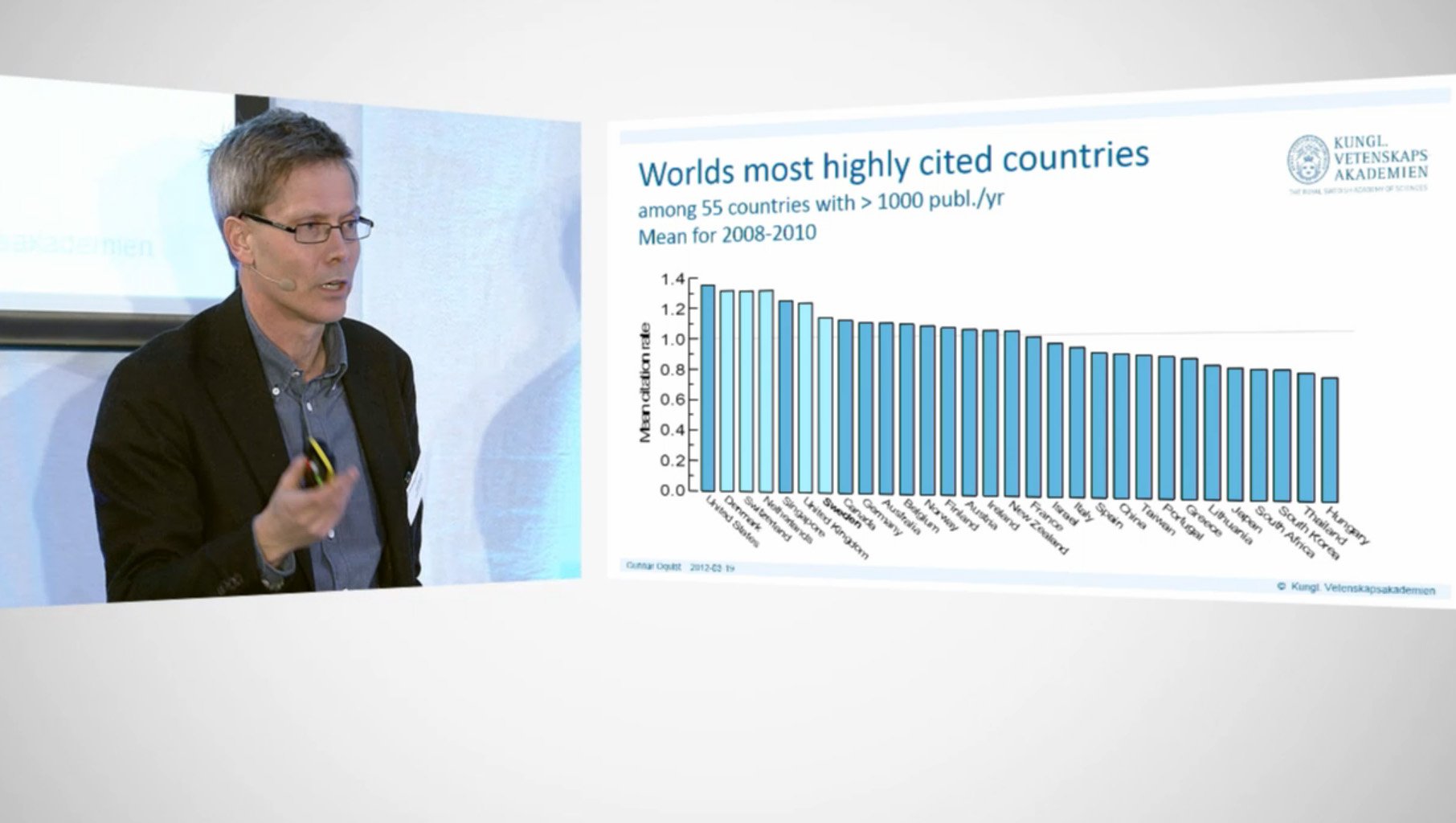 Screenshot from a recent Oslo conference video. The slide presented here by Mats Benner shows Denmark as number two in the world, just behind the United States in terms of 'Mean citation rate' according to the Swedish Royal Academy of Sciences
image: Screenshot of conference video

Danish universities named as blueprints for excellence on the Nordic conference circuit. This is after reports highlighted differences between European countries' bibliometrics and impact rankings

Top Danish university managers are getting invitations to explain the ‘Danish miracle’ at Nordic conferences on university research.

This is in the aftermath of comparative reports last year showing Denmark as a research leader in Europe, together with Switzerland and the Netherlands.

“The Danish miracle, what have you done?” asked Gunnar Öquist, author of one of these reports, while introducing the University of Copenhagen’s Prorector for Research, Thomas Bjørnholm at a recent conference in Oslo, Norway.

Gunnar Öquist’s co-authored report ‘Fostering breakthrough research: A comparative study’ compared the international standing of high impact research in Sweden with that of Finland, Denmark, the Netherlands, and Switzerland.

Denmark, the Netherlands, and Switzerland had stronger high impact research than Sweden and Finland, the report said. A later annex to this report included Norway as a low performer on research in comparison to Denmark.

Weak academic leadership in Sweden is “unable to set priorities in terms of allocation and recruitment to foster strong and creative academic environments”, the report found. The report also says that scientific renewal in Sweden, Finland and Norway were hampered by weak career opportunities for young scientists.

Needs to catch up with Denmark

This was in stark opposition to Denmark, which together with Switzerland and the Netherlands has ”preserved and enhanced the quality of their research base through a combination of political stability and long-term commitment, high-quality university governance, streamlined funding mechanisms and elaborate models of recruiting and promoting scientific talent.”

“Sweden should take these examples of best practice seriously, learn from them and start overhauling its research governance system as a matter of urgency,” the report argued.

Not used to praise

”Furthermore, the category of young researchers performing among at the “top 10 per cent” publication level is lower in Sweden than in Denmark, the Netherlands and Switzerland. The bibliometric studies also show that the differences between countries cannot be explained by the proportion of publications that are never cited, variations in the balance among subjects with different publication traditions, different degrees of interdisciplinarity, different degrees of international collaboration or varying rates of self-citation,” Gunnar Öquist said at a 2013 research policy meeting in the wake of his report’s publication.

At the Oslo conference, Prorector Thomas Bjørnholm of the University of Copenhagen joked after being presented as a representative of the Danish miracle. “I don’t think I have heard so much praise back home in Denmark. Most of the time we just get scolded,” he said.

He then went on to trace the development of Danish universities over the last 30 years.

“Denmark needs more knowledge-based jobs, and universities are seen as partners in this societal development. Universities have moved from being the enfant terrible of the 1960’s to a strategic ‘engine’ in society, and this calls for more leadership.”

He highlighted one of the most famous University of Copenhagen institutions, the physics department or Niels Bohr Institute, as a blueprint for good university governance. 20-30 Nobel Prize winners have over the course of the last century been associated with the Institute.

“There were many excellent individuals together at the same physical address. And then there was the framework: Bohr was perhaps not as brilliant as Albert Einstein, but he combined brilliance with leadership skills, and the ability to be a good leader of academics. He gave direction to the central scientific questions asked, and gave the scientists the space and structure to perform brilliantly”.

Scientists worked, ate and played at the Niels Bohr Institute. “They still have an original sign there which says. ‘Don’t use the books for table tennis’” says Bjørnholm.

This said, you can’t just scale up the Niels Bohr Institute experience to the whole University, according to Bjørnholm.

“The fundamental unit of the creative process is 5-10 maybe more people depending on the subject. You then multiply these units, and ensure that there can be an exchange between them. This is how you scale up a university,” he said.

And then you attract the best. “You need to keep a look-out at the entrance door, to get a hold of the best talent,” he said.

He highlighted the University of Copenhagen’s large research programmes, such as the planned new Niels Bohr Science Park. The building and organisation’s matrix structure is designed to solve the kind of cross-disciplinary research problems that make up good science today.

“We want to make the University of Copenhagen the ‘north star’ – if you will – that is just as known in the wider world as a place for creative and innovative cross-disciplinary research as Boston, London and Singapore”.