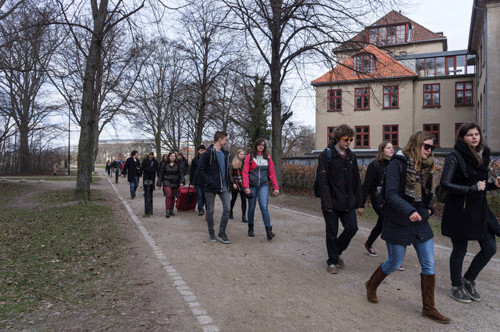 Friendly visits from Dutch universities lighten up the UCPH spring

University of Copenhagen (UCPH) just received a friendly visit from its Netherlandish counterpart, Utrecht University. As part of their study trip to the Nordic countries during Easter vacation, dozens of students visited the Faculty of Science Monday 21 March. They were welcomed by various presentations within the nature science field and a history session about the well-known Niels Bohr Institute.

Dutch student giving a gift to the presenters

The two universities have multiple exchange programs established, so the trip could potentially help students from Utrecht University to decide if they would like to study at UCPH in the future. A bunch of UCPH students volunteered to accompany and guide the Dutch students during their visit. The mutual interaction and exchange of information could also lead to the UCPH students deciding to study in the Netherlands.

Copenhagen is their first stop, and after the visit to UCPH they will head to Stockholm by train where they will finish their trip to the Nordic countries before heading home to the Netherlands.

It is a good sign that the University of Copenhagen is getting visited frequently by other international universities, especially considering the harsh budget cuts that the university has recently experienced and the shutting down of its English language media, the University Post.

There is one more visit scheduled to UCPH from the Netherlands, as Leiden University is also visiting next month, according to the organizer of the current study trip from Utrecht University. Although, it is hard to confirm, one thing is clear that if you see a lot of Dutch people next month hanging out on campus, go on and introduce yourself.

It is just a friendly ‘invasion’.