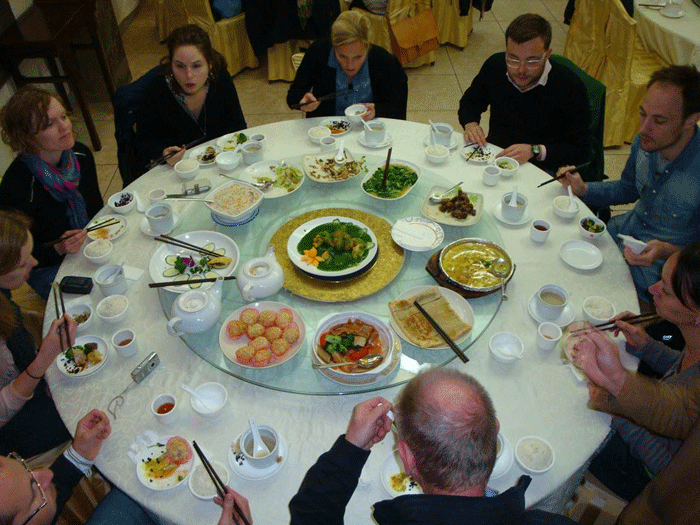 Researchers doing some food philosophy on a previous visit to China
image: Per Sangild

There is a nutritional and cultural divide between East and West. And a PhD course at the University of Copenhagen aims to tackle it.

The course Food, Health and Philosophy in East and West is a collaboration between the Department of Nutrition, Exercise and Sports and ThinkChina, University of Copenhagen, the Sun Yat-sen University and the University of Hong Kong. The course will take place in Hong Kong, Shenzhen, Guangzhou, China. 23 participants have been chosen from across the world.

The point of the course is to “get students from different cultural backgrounds to collaborate in areas of health and nutrition, as well as get them to better understand the limitations of their scientific discipline and world view,” says Per Torp Sangild, Professor of Comparative Pediatrics and Nutrition, IKVH at the Copenhagen University Hospital to the University Post.

Reach young researchers before the specialists do

The course focuses on the collaboration of sciences, East and West. “The various disciplines of science use different methods and look at different areas. We want the students to recognize and understand the limitations of their area of research and the methods that they use,” says Per Torp Sangild.

Professor Per Sangild: “Food and health are looked at as different areas in the west. Whereas in the east it is strongly believed that these areas are connected. So there is s potential clash there.”

Interdisciplinary research is necessary to get the full picture and be able to tackle medical challenges, but this can quite difficult for practical reasons, according to Sangild.

“Most scientific journals only focus on one domain, namely their own. People are not interested in doing cross disciplinary work, since it does not support their career and instead they specialize. That’s why our aim is to reach younger researchers before they start the specialization,” Per Torp Sangild explains.

Interdisciplinarity has a cultural and a dietary angle, according to Per Torp Sangild.

“Food and health are looked at as different areas in the west. Whereas in the east it is strongly believed that these areas are connected. So there is s potential clash there.”

Apart from the subject area of Food, Health and Philosophy, the students will overcome their own cultural barriers with hands-on lessons in Eastern civilities.

As an example, Per Sangild, mentions the use of conflicts in research.

“In the west people often think conflict or confrontation is good, because it leads to faster progress. This is partly correct, but it’s not necessarily useful when interacting with someone who comes from an Eastern background because instead of conflict leading to progress it may seriously inhibit the working relationship.”

These differences can prove to be quite a challenge, according to Per Torp Sangild. “It can be difficult for Chinese students to work in Denmark and be integrated because it is hard for them to understand Danish work habits and relationships, since things operate differently than in China. We have many young Chinese researchers who participated in our courses that are now working in Denmark or China, and I think the things that they learned about Western culture will help them as much it helps us learn more about Chinese culture.”

“There is a saying: that in China first you make friends, then you do business, or in this case science. Whereas in the West being friends with the people you work with is not seen as a necessity,” according to Per Torp Sangild.

“It is important that we understand and acknowledge these differences.”