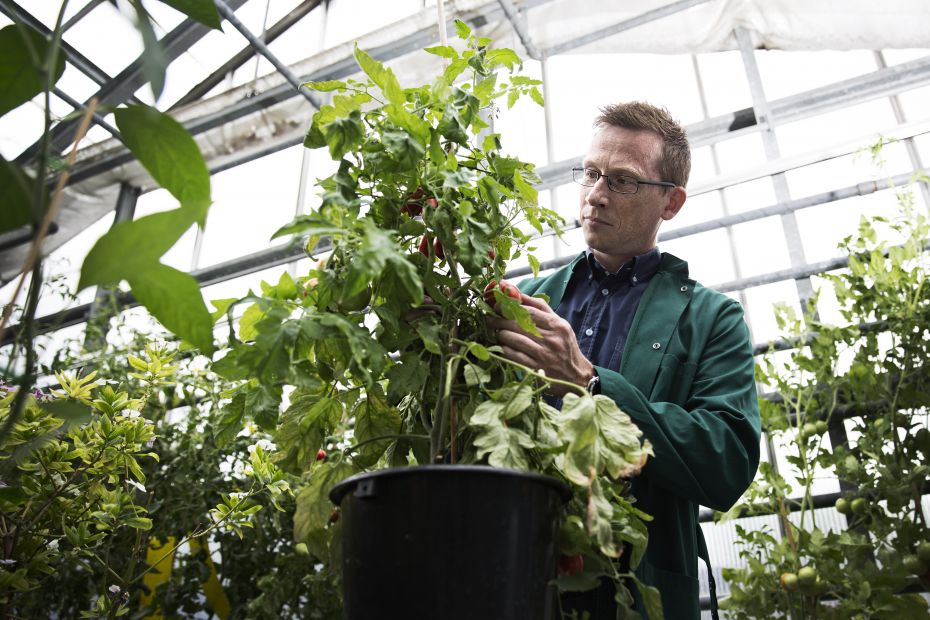 It is often the same criminal networks that operate drug trafficking rings, that cheat with foods, says assistant professor Kristian Holst Laursen. And the fraud is rapidly increasing, as there are more people that enjoy tomatoes than hard drugs
image: Lizette Kabré

Junior researcher Kristian Holst Laursen reveals the tampering with our foodstuffs by using analytical chemistry. Food fraud is big business, and the perpetrators often get away with it because there are no reliable analytical methods to provide evidence

“All trade in foodstuffs has a risk of error and fraud,” says Kristian Holst Laursen, assistant professor at the Department of Plant and Environmental Sciences at the University of Copenhagen.

He researches food quality and has since 2007 helped develop new methods to reveal where and how plants are grown.

“Internationally, food authenticity is a huge research field as a result of the many food scandals, but the problem has not really been recognized here in Denmark. We place our trust in authorities and labeling. In recent years, it has unfortunately been proven that there are also problems in Denmark – especially with imported food.”

It is estimated that 10 per cent of the foods traded in Europe are not what they seem to be. It can be parmesan cheese thinned down with wood chips, ‘local’ strawberries grown hundreds of kilometres away, or cheap wine poured into expensive-looking bottles.

“The food criminals are super creative and make lots of money on it. It really is big business. Often it is the same organized networks that are engaged in drug trafficking that are also engaged in food fraud. Moreover, it is difficult to detect the cheating because the analytical methods are still uncertain. If the fraudsters are caught, the penalties are often light, like a fine,” says Kristian Holst Laursen.

Today Danish authorities primarily look for residues from pesticides when they check to see if food is in compliance with organic labeling. However, the method is inadequate and shrouded in uncertainty according to Kristian Holst Laursen.

“The food criminals are super creative and make lots of money on it. It really is big business.” – Kristian Holst Laursen

“A crop that is grown conventionally with fertilizers, can be completely free of pesticides, while organic crops may contain traces of pesticides¹.”

This is why food authorities also keep a close tab on the work of university laboratories.

As Uniavisen visits Kristian Holst Laursen, a bag with an orange seal is on his desk. It is from the police who want to use the researcher’s analytical techniques in their investigative work.

“I can’t say much about the cooperation with the police, but if you’ve seen TV programmes like CSI, you will have an idea about what this is. In the United States, for instance, police have for many years analyzed elements such as oxygen and hydrogen in hair from unidentified corpses to clarify where the person grew up or lived,” he says.

It is the same principle Kristian Holst Laursen and his colleagues use to unravel where and how plants are grown. The composition of elements in plants reflects the earth they are grown in. This was discovered by Kristian Holst Laursen, when he was part of the research project OrgTrace and wrote his PhD on organic plant products.

After three years of countless visits to the potato field, a study in rats, and a study of what happens to a healthy young man put on an organic diet, he and the other researchers found out that there was no apparent health effect in eating organic. But what they did discover was that there was a difference between the composition of elements in the crops that were grown organically and conventionally.

The project OrgTrace resulted in a new, quick method to measure the composition of elements in plants. Then Kristian Holst Laursen and his research colleagues looked even deeper and began to measure isotopes².

“We went one step further,” says Kristian Holst Laursen and this was the ticket to a European Union project called AuthenticFood.

Kristian Holst Laursen and his colleague Professor Søren Husted led a research team that traveled the length and breadth of Europe. They collected, for example, durum wheat and tomatoes from organic and conventional experimental fields in Italy.

An analysis of the tomatoes’ nitrogen showed that the organic plants had more of the heavy isotopes of nitrogen than the conventional ones did. This is because nitrogen from manure has a different isotopic signature than that found in factory fertilizer.

“In AuthenticFood we tested a variety of analytical methods’ ability to distinguish organic plants from conventional ones. We got confirmation that the analysis of stable isotopes has potential in determining food authenticity,” he says.

“In northern Italy, where there is volcanic activity, you find unique isotopes of sulphur for example,” says Kristian Holst Laursen .

Several international research firms have begun offering isotope analysis to the industry’s food authorities, but the method is expensive and still not flawless.

“One of the pitfalls is that you cannot distinguish between plants fertilized with chemical fertilizers and plants grown in soil that has been improved with green manure³ that lives up to organic principles,” says Kristian Holst Laursen.

A solution to the problem is to look at the isotopic signatures of chemical compounds that consist of several elements. It is the focal point of Kristian Holst Laursen’s latest research project, for which he received DKK 3.5 million from the Danish Council for Independent Research (DFF) in 2013.

“A week before we started the EU project AuthenticFood the Italian police seized 700,000 tons of fake organic products.”

The research group is also experimenting with other methods.

“We recently had a graduate student employee whose expertise was in the rover currently milling around on Mars identifying elements with its laser. Back home in the plant laboratory, we studied whether a laser shooting at small pellets pressed from dried tomato powder can determine the composition of elements in the tomato,” says Kristian Holst Laursen.

The technique looks promising, and Kristian Holst Laursen hopes that in the future it will make it faster and cheaper to solve the riddle of plants’ geographical origins.

The rest of the iceberg

Research projects are piling up on Kristian Holst Laursen’s desk, and with the increasing awareness about food fraud in the media and with the authorities there is no indication that he will become unemployed in the near future.

“A week before we started the EU project AuthenticFood the Italian police seized 700,000 tons of fake organic products. And shortly before the project FoodIntegrity was launched, the horse meat scandal broke. I think we’ve just seen the tip of the iceberg,” says assistant professor Kristian Holst Laursen.

The food detective hopes to uncover the rest of the iceberg in the coming years. In March 2016, he was put on a tenure track career programme, assuring him fixed employment for six years as an assistant professor and automatically – if he delivers on a number of targets – a subsequent lectureship.

That Kristian Holst Laursen would make a career for himself disclosing food swindles at this level came as a surprise to himself.

“I’m from the countryside and I have always been interested in agriculture. When I started studying to become an agronomist at university, I figured there would be a car that would come and fetch me the day I graduated, so I could go home and work in Northern Jutland. But then I started getting interested in the theoretical parts of it, and now I’d rather be here at UCPH. I think we’re doing some really exciting projects. ”

Footnotes:
1. PESTICIDE TRACES can occur in organic farming grown in soil that 20-30 years ago was used for conventional farming, or if the soil is contaminated by a conventional neighboring field.
2. ISOTOPES are variants of the same element with different numbers of core particles and therefore different weights. With isotope analysis, scientists can obtain a more accurate diagnosis of plant origin and method of cultivation.
3. GREEN MANURE is based on plants that are worked into the soil to give nourishment. Often they are plants that can fixate atmospheric nitrogen binding it to the soil, like peas and clover.