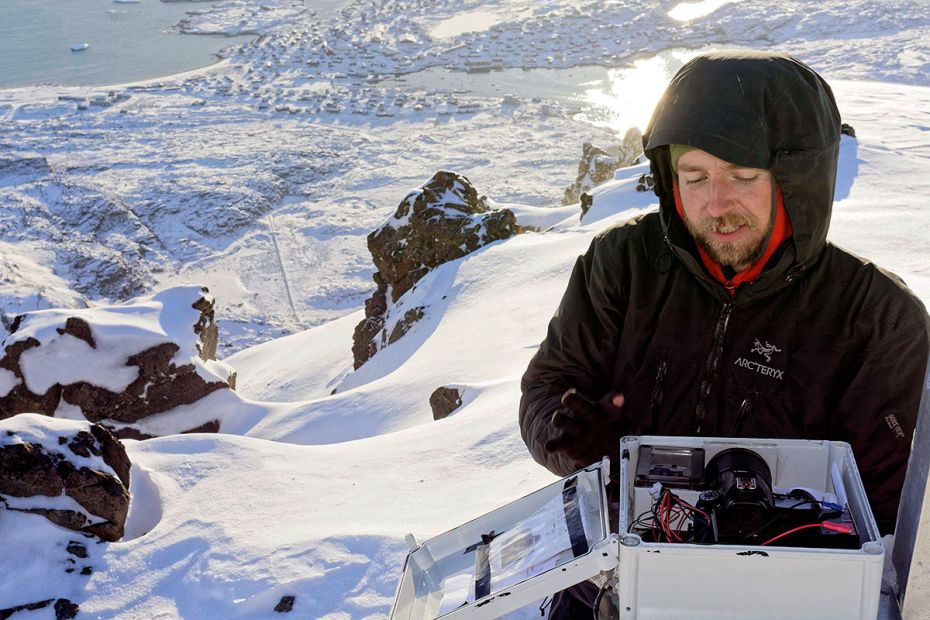 Three steps from where station leader Casper T. Christiansen is poised, lies an 800 metre drop. The small, Greenlandic city Qeqertarsuak lies in the ‘abyss’ in the background.
image: Anders Fjeldberg

Polar researchers should probably not be afraid of heights.

The University Post has written about a trip to the top of the Lyngmark glacier behind the Arctic Station, where station leader Casper T. Christiansen is to supervise a camera which regularly documents sea ice.

The camera was mounted a little too close to the edge, and if it seems like there is a huge drop three steps from where Casper is standing in the photo, you’re not wrong. It is approximately 800 metres. Vertically down.

Perhaps this measuring equipment should be placed a little further away from a vertical drop of – close to – 800 metres.

The box is secured to a structure which bears solar panels. They deliver some of the power which drives antenna system for Qeqertarsuak, which can be seen in the ‘abyss’ in the picture.

As Casper said during the trip, the box could also have been set up on one of the other structures which is poised further away from the edge, but now the box has been set up on the structure nearest to the abyss, although there were to other solar panels to set it up on.

The measuring device’s position is marked with the red circle.