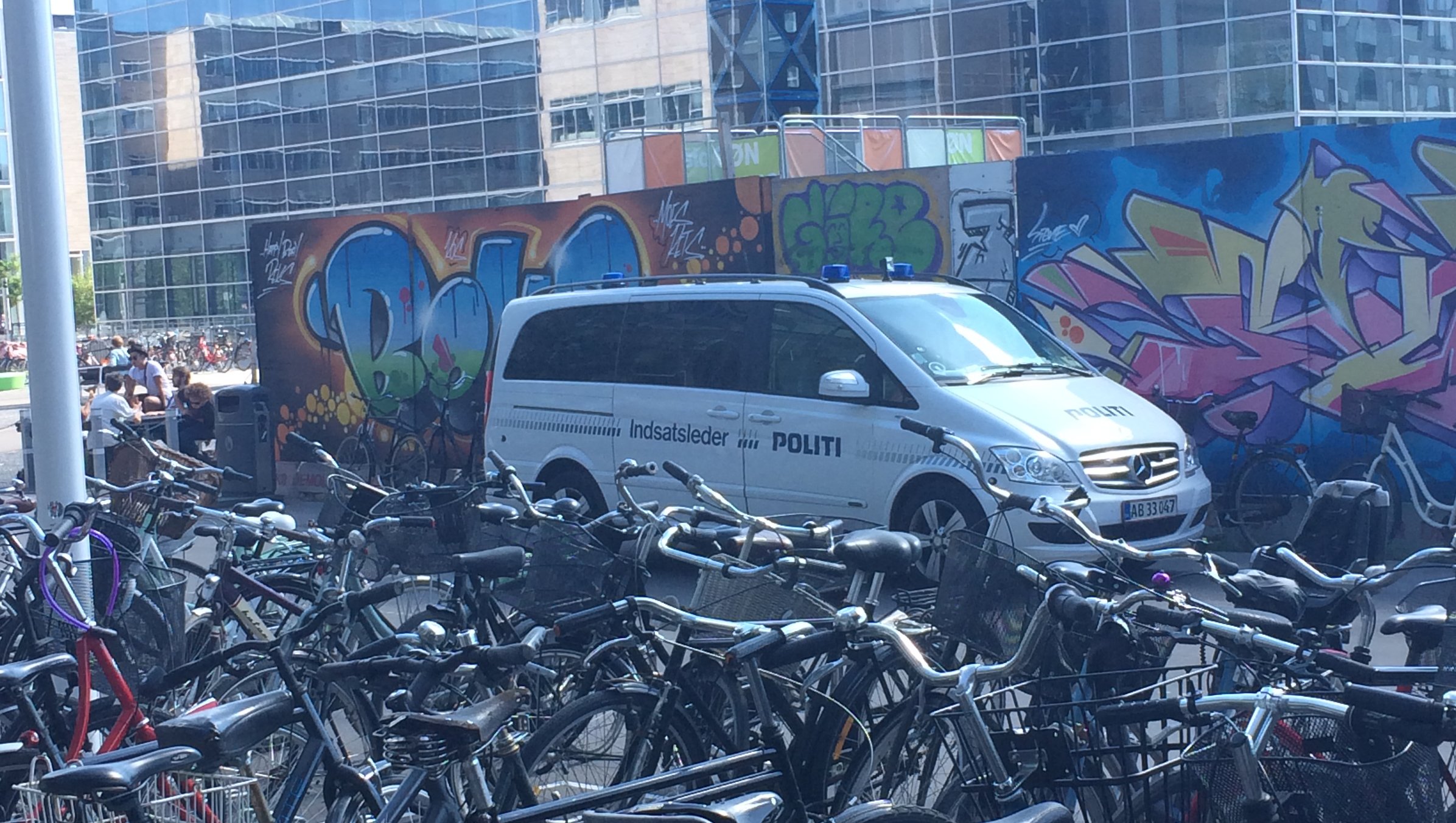 Police turned up in full force at the University of Copenhagen humanities campus Thursday, searching for the 'suspect'. They had earlier shut off the whole Nørreport-Central station underground S-train line
image: Rana Sérida

Police shut down part of the train traffic in central Copenhagen, looking for a man exhibiting 'suspicious behaviour'. It turned out to be a nervous UCPH student on his way to an exam

It was just a nervous University of Copenhagen student on his way to an exam that caused Copenhagen police to temporarily shut down train traffic between Nørreport and Copenhagen Central Station on Thursday 28 August and to initiate a city-wide manhunt.

A woman reportedly called the police after seeing a ‘Middle Eastern-looking man’ behaving suspiciously on the S-train to Copenhagen in the morning. The man was seen reading a book on terrorism and started panicking when his suitcase fell over during the train ride.

Heavily armed police officers then systematically searched the area around Nørreport station, where the man got off the train, and other key sites in the city, and published a photo of him on Twitter, hoping for help from the population.

Shortly after two o’clock in the afternoon, police confirmed that they had found and identified the man – as Alisiv Ceran, a UCPH student on his way to an exam in American foreign policy. The book he had been reading on the train, on the war on terror, was on the reading list for the course and his suitcase contained his printer, necessary for the written exam.

When his suitcase fell over, Alisiv panicked: ”I was scared that my printer had been damaged. If you want to type your exam on a computer at the University of Copenhagen, your own printer just has to work,” he said to bt.dk.

Hid in the bathroom

When Alisiv was done with the exam after four hours, he found a lot of missed calls from friends and family on his phone. After seeing his picture all over the media, he called the police.

”I was so nervous that I hid in the handicap restroom while I called the police to tell them what happened. Only when the police came, I got out. They examined my suitcase, apologised, and I was allowed to go,” he said to bt.dk. He used the handicap toilet because there was more room for his suitcase, he said.

Alisiv says, of course it is not nice to be suspected to be a terrorist. ”But the police acted just as they should in such a situation. I’m certainly not going to complain. But I am a bit sad that that woman on the train was afraid of me,” he adds.