Preview: Riddle in a mystery in an enigma 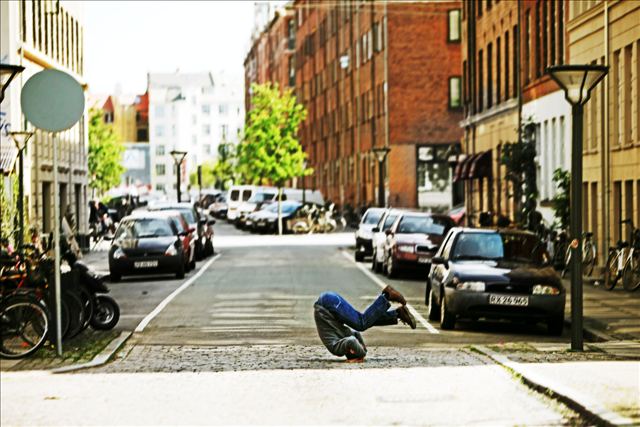 An artist performs in Nørrebro during the Mellemrum festival. The festival offers audience members the chance to experience new sides of Copenhagen neighborhoods and performance art
image: Per Morten Abrahamsen

For most people, going to a performance is often a bourgeois affair. Maybe you dress up, order a glass of over-priced wine, or take an orchestra-side seat in some plush 19th-century theatre. At the very least, you probably have some clue of what it is you’re about to see.

Not so, however for the Mellemrum performance festival, produced by Danish choreographer and artistic director, Kitt Johnson. Over the course of three weekends from 10 May to 27 May, The Mellemrum Festival, this year hosted in Vesterbro, will challenge traditional notions of performance art. Audience members won’t even know where the performances take place until just days before.

In its third season, the concept behind Mellemrum/Vesterbro consists of three different guided walking tours around the neighbourhood where nine different performances will take place. Music, dance, and experimental theatre presentations will be given by eleven different artists, many of them internationally known.

The Mellemrum festivals have been noted for their unexpected and unorthodox insights into Copenhagen. Past locales for the festival have included Nørrebro in 2010 and Indre By (inner city) in 2008.

Kitt Johnson, chose Vesterbro as this year’s location where she has spent a greater part of the year learning about the neighbourhood’s history, secrets and modern-day ‘alternative’ spots. Through this process, she and the other artists have drawn inspiration from unique urban spaces in the neighbourhood for their performances. The participation from over 40 local inhabitants also lends authenticity to the artistic renderings.

Want to score a chance to uncover the secrets of Vesterbro and experience the Mellemrum/Vesterbro festival for yourself?

Tell us about your most favourite or unique spot in Copenhagen, preferably Vesterbro, for a chance to win two tickets to the festival. Send in your entries to presse@kittjohnson.dk before 7 May.