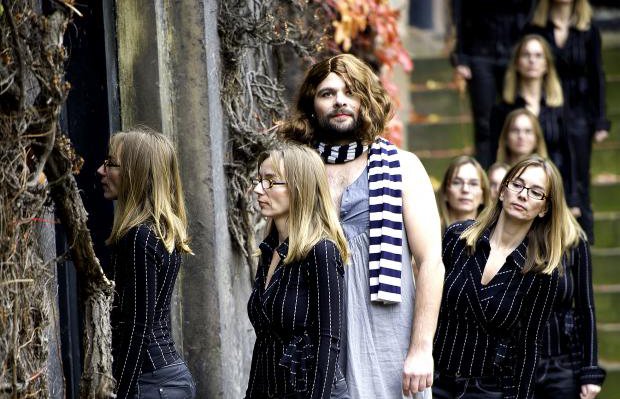 Best way to get a professor job if you are a man, is to dress up as a woman. University attempt to create gender balance the subject of contention
image: Lars Juul Hauschildt (Model photo)

Four out of five University of Copenhagen professors are men. To fight this perceived inequality, the University now has a gender policy that, in effect, favours women. This should be illegal, argues Professor Hans Bonde

Gender policies at the University of Copenhagen are discriminatory and ultimately harmful to men, women and the University’s reputation. This is according to Professor Bonde, who has argued this in our Danish sister publication Universitetsavisen.

»I have become uncomfortable here – at a university which I otherwise hold to be a place of honour and ideals« says Hans Bonde, who researches in Gender Theory at the Department of Exercise and Sport Sciences.

»It doesn’t make any sense when we favour one gender over the other, and thereby put higher principles of not judging people on gender or ethnicity, or on anything else that has no influence on the quality of their research,« he adds.

Management: Should be more women at the top

University management decided in 2007 to rectify a perceived imbalance in gender at the top of research and management. There were too many men at the top, they felt.

The majority of students and PhD’s are female. But the higher up the academic ladder, the fewer women. Among professors women make up just one fifth of the workforce.
There should be more women in research and management, management said, and an equality action plan was outlined to rectify the situation in the period 2008-2013.

Biggest point of contention is the jump from lecturer to professor. The equality action plan rewards faculties that promote female lecturers to professors with an extra, free, professorial position.

Now nobody can blame faculty managers for following these economic incentives, says Bonde. He believes the procedure is corrupt, and in violation of Danish laws on equality.

He has called for documentation from the personnel administration department HR & Organisation under the Danish Freedom of Information statutes. He wants to find out exactly how the economic incentives are working at the faculty level.

Professor Bente Rosenbeck from the Department of Scandinavian Studies and Linguistics at the University of Copenhagen helped make the original draft of the pro-women gender policy.

She comments to our Danish section that »the action plan has been a success. It has meant that there have been considerably more women professors at the University of Copenhagen. But the figures show that we should not rest and there is more work to do«.

One of the arguments for favouring women professors is that it would create role models, inspiring other women to strive for higher positions too.

Hans Bonde, however, believes that female professors ultimately risk losing status, their promotion to full professor being nothing more than the result of the ‘professor-for-free’ quota system.

Bonde himself in mostly female group

Hans Bonde is himself head of a research group, Sport, Masculinity, National Identity and Politics, which includes himself, two female professors and three female lecturers.

»That would never make me think that we should hire a man next time, he says, arguing that the applicant’s gender should be immaterial.

In his research group’s case, even with a 5 to 1 ratio in favour of women, University policy means that his department would benefit financially if they decided to hire another woman.

Rector: No easy road to professor

University management would not comment this article before a forthcoming report on the action plan.

Rector Ralf Hemmingsen however is quoted in the Danish daily Politiken recently on the controversial gender action plan:

»The plan gives faculties funding for an extra professorate, when they hire a certain number of female professors. All criteria for hiring are still the same. All are subjected to a professional academic evaluation. All have to live up to the same criteria. There are no easy routes to a full professorate,« he says.