Professor nostalgia: Oh ... our students used to be so creative! 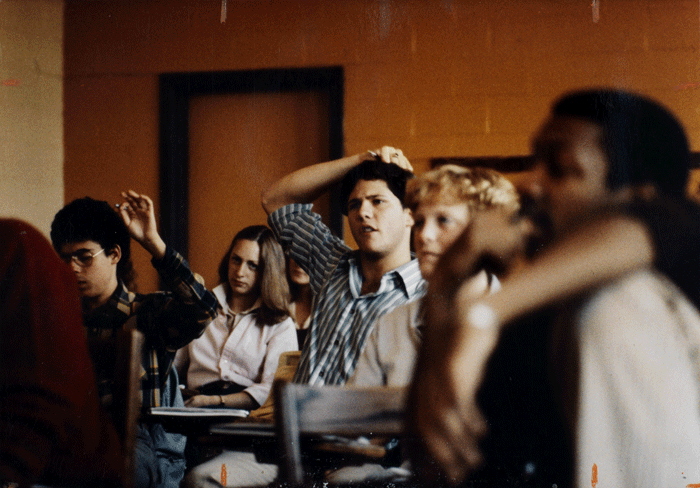 Students in the 1990s engaged in a classroom discussion.
image: Photo from Flickr CC

Students are more likely now to refer to themselves as 'pupils', a symptom of a more demanding educational system that has come at the loss of innovation, UCPH professors say

So this is the question: How have students changed over the last decade?.

We asked three professors who have been professors at the University of Copenhagen (UCPH) for at least 15 years. And they all, amazingly, came up with more or less the same thing.

It was something more profound.

Students now: This is settled, this is where we learn

It is in how the students see and talk about themselves. ‘Students’, the self-motivated, interested, types, have become ‘pupils’. That is, they are less self-motivated, and in need of more structure.

The change in language stems from the consequences imposed by the current education system, according to Per Møller, Professor of Sensory Sciences at UCPH. He believes it is all due to higher grade requirements and the need to finish faster.

“This shift in language contains an implicit understanding that ‘this is structured, this is settled, this is where we learn’,” says Møller.

Professor of Rhetoric Christian Kock and Professor of Cell biology and Physiology Berthe Marie Willumsen have also taken note of the way students now view themselves and their studies at the university.

“There is a trend for students to refer to themselves as ‘pupils’ and to this place (UCPH) as ‘The School’. That their ‘homework’ is due. Expressions directly transferred from school,” says Kock.

“It seems to me, there is a higher percentage who struggle more, and who find things difficult. There are more ‘pupils’ than ‘students’,” relays Willumsen.

More than a change in language

According to Møller, the change in semantics means more than just a change of habit.

“They’ve been told by the foolish government that if you come here directly after high school, you get to multiply your grades. This means that there are a large number of studies where you need an absurdly high average mark to get in, leaving no room for screw-ups in high school. Everything is focused on structure and performance, so the students act accordingly. The disciplinary ramifications that follow, lead to the students thinking ‘this is not a joke’ – I have to be able to utilize what I learn.”

“Everything is focused on structure and performance, so the students act accordingly.”

Møller understands this pragmatic approach because it’s the natural product of an educational system that puts performance first, but the results can be bothersome.

“I get a little tired sometimes, when I’ve just explained something fascinating outside the curriculum, and a student puts his hand up asking ‘How is this useable?’. I’ve been on the radio dozens of times, and when they ask me this sort of question, I think about Jens Jørgen Thorsen (Danish artist and provocateur) who used to answer it by saying: ‘To get more pussy!’”.

Both Møller and Koch share the view that the current educational system hinders the student’s ability to explore their field of study creatively, which means less possibility for innovation.

“We have ventured too far into the ditch of concerning ourselves with grade 12s and the speed of completion. All the while there is less innovation, less boldness, fewer misses, but also fewer breakthroughs,” says Koch.

This leads to less innovative students all around. An educational system focused on sifting students through as fast as possible, rewarding the fastest, leaves little room for taking chances, says Koch.

“The political system works against this because it adds extra time to the education, which doesn’t go well with Excel spreadsheets. At the same time, it is discussed how much Denmark needs innovation, and how it should be included in the curriculum. We ponder this, because if innovation is doing something no one has ever done before, how can one teach it? The system we’ve had the past years works against innovation, but at the same time, it is in high demand by the government,” says Koch.

Møller agrees that recent education reform initiatives may be hindering creativity and innovation.

“The study progress reform totally destroys young people’s opportunity to be innovative. If someone gets a good idea and says ‘making a small company out of this might be fun’ – Forget it. This leaves the student unable to study full time, risking his or her entire education. This is not how you make a creative society,” explains Møller.