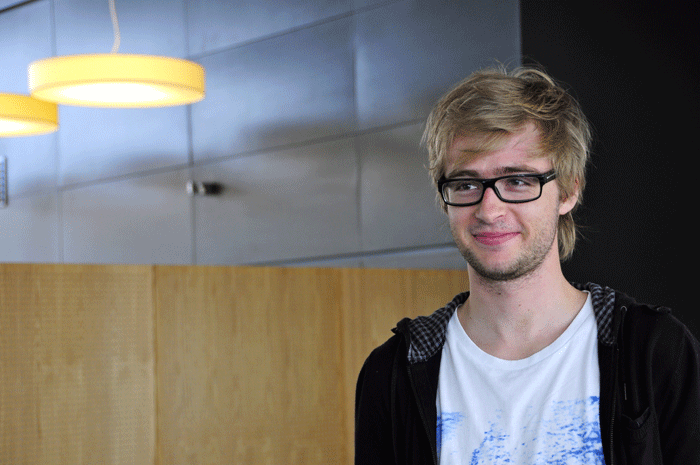 During the first three weeks of living in Copenhagen, Julian, a French tuna fishing runner-up EU champion, has dealt with puzzles in his everyday life ranging from bottle recycling and its link to social equality, to conquering the supermarket and Danish currency

Julian from southern France is in Denmark to study political science for a semester this fall.

After arriving in Copenhagen, Julian has been puzzled by some of the more practical aspects of Danish life – like the fact that Danish people always wait for the green light in intersections before daring to cross the street, and that after eating in the cafeteria, people clean up after themselves when they are done eating.

»It’s not at all like that in the south of France,« Julian says.

He goes on to ponder the Danish recycling system. The notion of getting money in return for recycling plastic bottles is foreign and fascinating to him and perhaps even one of the reasons why there are less homeless people on the street in Copenhagen:

»It’s a very, very good idea. Even the poor people can have money when they pick up the bottles. I don’t know if it’s related, but there are not a lot of homeless people here. It’s quite different from France«.

Julian seems quite enamored with Copenhagen, but there have been difficulties in getting used to the Danish way of life.

A balanced diet of potato-chips

After consulting with his boyfriend in fast-paced and excited French, the two agree that getting used to the Danish currency (with holes in the coins!) instead of euros was a challenge.

»The first two days, I didn’t eat,« he says. With the exception of potato-chips, as those were the only type of edible thing he could recognize when he first encountered a Danish supermarket.

Best to catch the tuna

It turns out Julian has a very special talent indeed:

»I’m the runner-up EU champion of tuna fishing,« he reveals after much laughter.

Julian grew up in the south of France, where his father taught him as a child how to fish, eventually leading him to enter competitions in this field. Hesitant to reveal when exactly he was rewarded the title, he says that it’s a few years back.

»It’s not something that I’m very proud of,« he laughs, adding that he will not be defending his title this year.