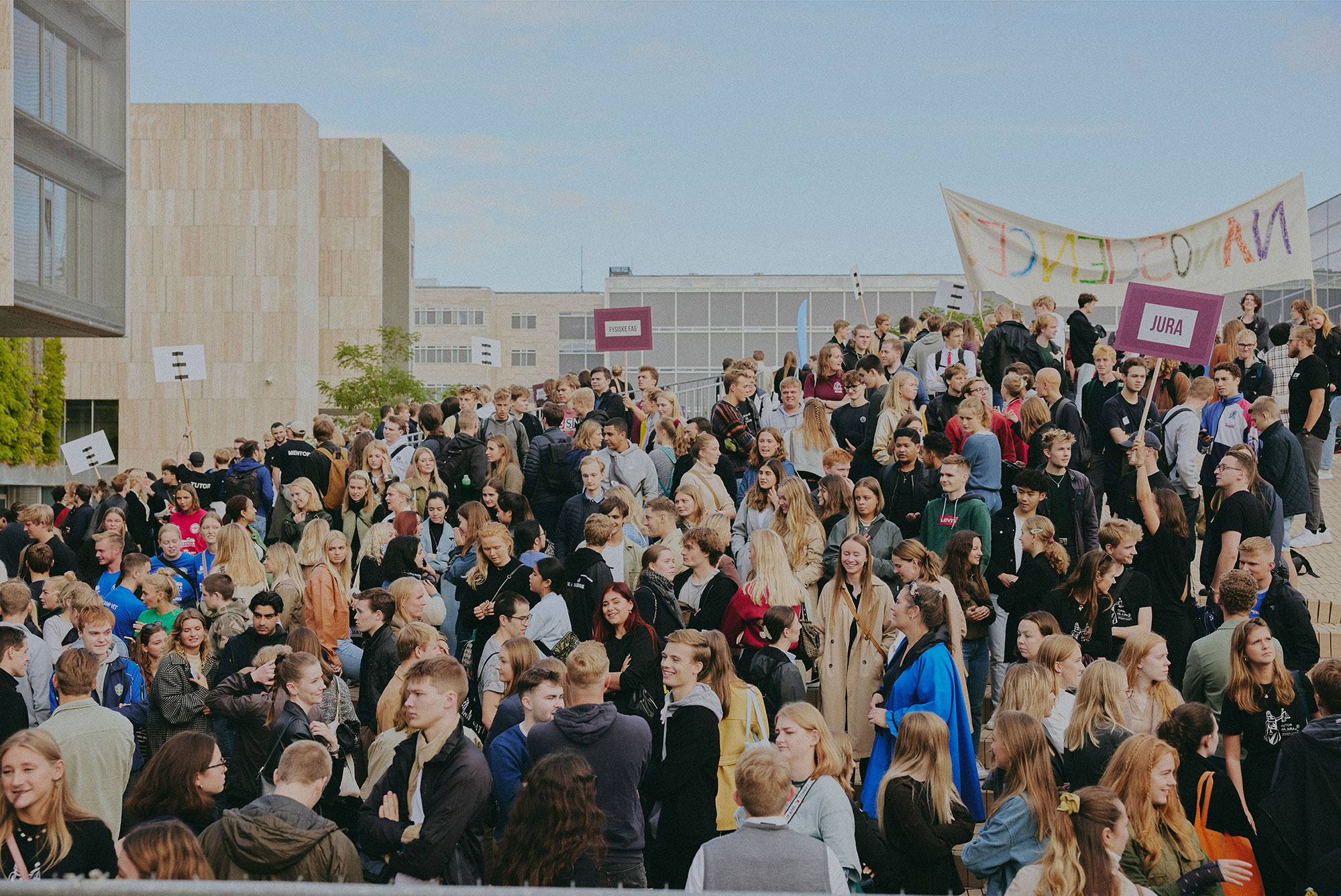 After the relocation agreement, fewer students will likely gather at the start of studies on South Campus — the home of the Faculty of Humanities.
image: Jonas Pryner Andersen for Uniavisen

If politicians want to avoid major negative consequences for education and research, they should give the University of Copenhagen permission to keep one third of the places earmarked for cuts. This is according to Prorector at the University of Copenhagen (UCPH) Bente Stallknecht, after the university has drawn up a provisional plan to fulfil the terms of the relocation agreement.

In most faculties it is still unclear which courses will be affected when the University of Copenhagen (UCPH) cuts its intake of new students in the Danish capital city by a total of 1,502 study places before 2030.

This is clear after the university’s plan to meet the requirements of the relocation agreement was released 12 January.

The plan, for example, does not point to any specific subject at the Faculty of Humanities that has to be reduced or closed as a result of the agreement This is even though the faculty has to cut a total of 640 places.

One reason for this is that the university wants to prevent the politicians from interfering, according to Bente Stallknecht, Prorector for Education at UCPH.

»If we released exactly what we intend to cut and with this number of places on these particular degree programmes, then we would risk the politicians picking and choosing, and saying that we like this degree programme and we don’t like this one. They need to stick to their general policies and not interfere with the details,« she says.

In total, the specific proposals from the University of Copenhagen are only 60 per cent of the reduction target. The rest still needs to be clarified.

The university hopes, however, to not have to abolish one third of the places that they have been tasked with reducing. UCPH has requested a rebate from the cuts to protect, for example, small language courses and IT degree programmes whose graduates are in high demand in the private sector.

And Bente Stallknecht »can’t imagine« that politicians will ignore this.

»It is stated in the agreement, that we need to take employment levels, STEM and IT subjects, language subjects, as well as national and geopolitical interests into account. This is necessary if we, for example, are to continue to have upper secondary school teachers in German and French, and if the small courses, which only exist in eastern Denmark, are to survive,« she says.

Some courses are mentioned in the plan from the University of Copenhagen.

As the University Post has described previously, the master’s in clinical nutrition is to be shut down, just as veterinary medicine has to move student places to a new programme in Foulum, Jutland. The medicine programme has to move places to the town of Køge.

The reason the two faculties can put a name on more degree programmes than the Faculty of Science and the Faculty of Humanities is, according to Bente Stallknecht, that they have fewer study programmes and can therefore work faster.

It is not yet completely certain that the courses mentioned are to be cut.

»It’s pretty certain, but before we get a response from the ministry, we cannot be 100 per cent sure,« says Bente Stallknecht.

Would it not be better for staff at the university if you, just like Aalborg University and Copenhagen Business School, clearly announced which courses are to shut down, so they know if they are going to be affected?

»We do not think this is a wise process either. But I say: Take it easy. We do not know what will happen. And this agreement will run to 2030. There will be a process, and involvement so that we can do things as wisely as possible. Don’t panic, we are not going to cut tomorrow.«

You expect to relocate only one fifth of the places to other parts of the country that you plan to cut in Copenhagen. Why?

»Because we don’t have a large campus outside Copenhagen that we can move out to that makes sense financially, and that makes sense in terms of a good study environment,« says Bente Stallknecht.

»We have also chosen to respect the other universities’ profiles. If we moved into Region Zealand, we come in to the area around Roskilde University, and if we moved further west, we get into the area covered by the University of Southern Denmark. This is also a consideration.«

Bente Stallknecht has criticised the relocation agreement in strong terms, and she has not changed her mind since then. In a radio programme on the Danish broadcaster P1, she gave the agreement a 2 out of 10. In a news item on the UCPH intranet, she praised the students who protested against the agreement in front of the parliament buildings.

We do not think this is a really wise process either.

»The relocation agreement has given us a task we would have preferred not to have,« she says and criticizes the parties behind the agreement.

»If it is the case that the politicians want to move student places from universities to university colleges and vocational schools, then we would rather have them say this directly instead of wrapping it all up as regionalisation. It’s a form of shadow theatre.«

She laments the fact that politicians have put a cap on the numbers of student places at universities, something that will limit the options to set up new courses.

»So much is happening in the world of research all the time, not least in terms of the green transition. Should we not be allowed to set up a new, relevant study programme before 2030 without closing down another programme?«

»We will fight to get the cap removed because we do not think it is beneficial for the future of Denmark,« says Bente Stallknecht.