Rearguard action to keep the jobs 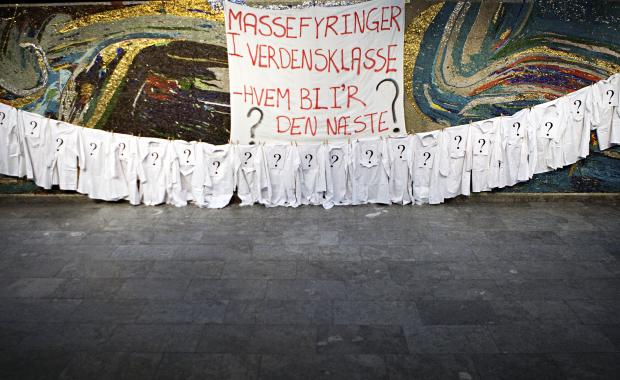 Staff and students at the Faculty of Life protested cutbacks back in January. The banner says 'World class mass layoffs: Who is next?'
image: Lizette Kabré

Despite an announced 130-job cutback at the University of Copenhagen, it is far from certain that this number of employees will actually be laid off. Management and staff reps may find alternatives yet

The situation was almost exactly the same before Christmas last year at the University of Copenhagen (U of C). The budget didn’t hold up, and staff had to be laid off.

But only seven people were fired last year, despite the need to make cutbacks equal to more than a hundred staff positions. This year also, management and staff representatives are hoping to find alternatives to firing the unfortunate employees.

Last year the suggestion from representative member of the trade union ’HK’ and the university administration, Ingrid Kryhlmand, to set aside DKK 15 million instead of DKK 10 million for voluntary resignations, was accepted by management. She is optimistic this year too.

»You can imagine different steps being taken that won’t require actual layoffs. Last year, many layoffs were projected, but the numbers ended up somewhere completely different,« says Ingrid Kryhlmand.

The Faculty of Science had to make cuts of DKK 45 million. The Dean of the faculty, Nils O. Andersen, estimated that roughly 70 members of staff would have to be laid off.

But when the dust had settled in January this year 2009, four employees had ended up losing their jobs. 45 employees agreed to a voluntary resignation and a further 36 resigned themselves, were transferred to another part of the university, or had their wages paid for externally.

Things played out in the same way at the Faculty of Health Sciences. Some employees thought that the offer of voluntary resignation was like having a gun put to their head – they had no choice, and would be laid off if they said no in any case, they said.

Management and trade union reps are again trying to make the process as painless as possible for the people in question, they say.

»Management finds the situation deeply regrettable. We will do our best to ensure that the process causes as little distress to the individual as possible,« the university director Jørgen Honoré writes in a letter to the administrative staff.

According to the deputy head of HSU, a board that ensures cooperation between management and staff, the goal is to get as close to firing nobody at all, as possible.