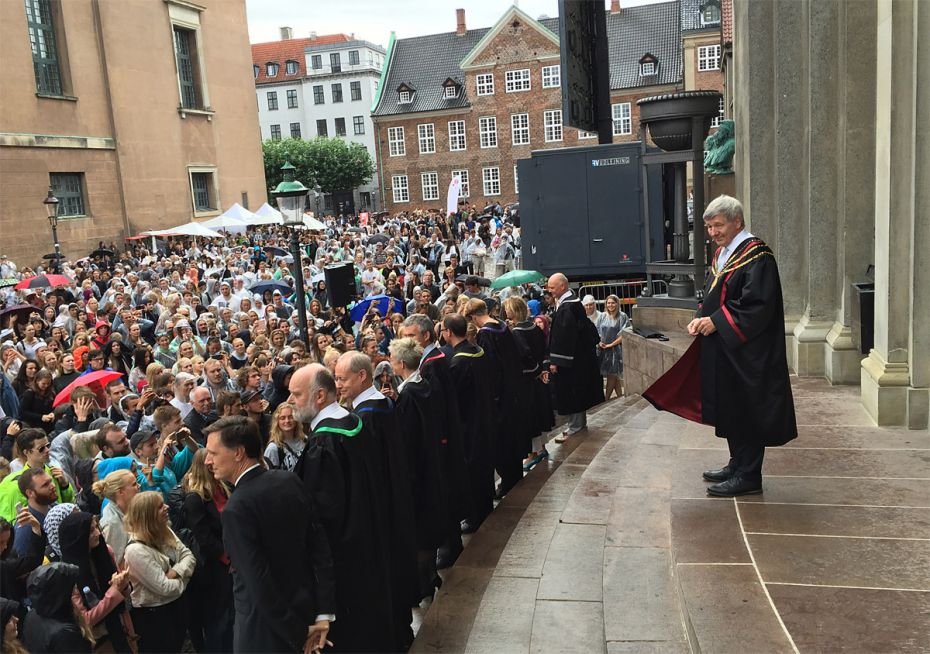 Rector welcomed new students at UCPH for the last time in his career. He then asked them to shake his and prorector Lykke Friis' hand – affirming the university’s basic values of insight, diversity and openness

Rector at the University of Copenhagen Ralf Hemmingsen welcomed the year’s new students Friday 2 September with a traditional handshake. In his welcoming speech, he quoted both Lenin, Suzanne Brøgger and Michelle Obama.

What a pleasure to welcome such a fantastic looking crowd to the University of Copenhagen!
Welcome to almost 1,200 new international students from all continents.
Welcome to 7,312 new students from Denmark.
Please give a big round of applause to all your new fellow students.
Just recently, I read an article asking the question. Is this the end of the world as we know it?
Some say, that the old left-right political dividing lines are history.
Now the new dividing lines are ‘open’ versus ‘closed’.
Open borders or closed borders?
Open access or closed access?
Open minds or closed minds?
I have a background in psychiatry, not politics.
But for me, there is only one right answer: Openness.
Here at University of Copenhagen we are open:
• Open to new collaboration
• Open to new ideas
• Open to new students, no matter which background they have.
What counts here is:
– Talent
– Passion
– Determination
Diversity is the strength of our university.
You are the strength of our university.
I will now switch to Danish

(the following was originally in Danish, ed.)
The Summer of 2016 has been a hot one! And here I am not only thinking about Distortion and Roskilde Festival. Although I couldn’t make it to either of them. I am sure that many of you represent UCPH here a whole lot better than I would be able to. No, this summer was hot for other reasons. The silly season did not materialize.

“The Summer of 2016 has been a hot one! And here I am not only thinking about Distortion and Roskilde Festival.”

Lenin once said: “There are decades when nothing happens and there are weeks where decades happen”.

For instead of the silly season we witnessed several major events over the course of the summer weeks:
• A thrilling referendum in Britain, which ended with a Brexit
• Horrible acts of terrorism around Europe
• An attempted coup in Turkey
• And – last but not least – the nomination for US President of a man who will build a wall around his country to keep strangers out. A man who has given a boost to a new concept: ‘the post factual society ‘.

“The knowledge society has become so confusing for everyone, that the clown has now replaced the sage as an ideal”
Evidence suggests that she may be partly right.
But here at UCPH we don’t recognize ‘the post factual society’

Here at the University we do not build walls – we build bridges
And here at UCPH a clown must never switch places with the sage as an ideal!
Allow me to quote the US first lady:
“When they go low – we go high ‘
As a university we always have an obligation to take our knowledge to new heights, and to stay focused on the facts and on knowledge.

We keep the flag flying and provide solid and evidence-based research.
And we train new students and turn them into graduates that can fly.
We intend to stick to this!

“But here at UCPH we don’t recognize ‘the post factual society’. Here at the University we do not build walls – we build bridges”

Dear new students!
You are now to begin study programmes with names like pharmaceutical sciences, philosophy and public health.
You will be spread out over the city from the KUA buildings on Amager to North Campus and Frederiksberg.
And you will meet researchers and educators with large differences in academic focus.
But no matter what your subject is, we all have our objective and critical approach in common at UCPH.
It is the university’s foundation and strength.
Another strength is precisely your diversity.

I would like to ask you to give them a big round of applause.

In a little while you will walk up these stairs and into the university’s beautiful Ceremonial Hall from 1836. The ballroom has in recent years been the framework for prominent visiting guests such as Angela Merkel, Paul Auster and Ban Ki Moon.

And then yesterday we had a visit by Danish Prime Minister Lars Løkke Rasmussen, who presented the government’s 2025 plan. And things did not go quietly!
You have to say that there is still a struggle ahead if we are to ensure that education and research remains a key factor for the future – not only in 2016 or 2025 – but also in the year 2050.
The fact is, that education is always a good investment. Both for society and for the individual.
And as a Danish king once said: “Just because we are poor, we do not need to be stupid”

You can become overwhelmed by the plans and reforms that reach nine years into the future.
And you can be overwhelmed by a world that is rapidly changing with terror, coups and closed borders.
But here at UCPH we have a long tradition to hold our own in changing times.
Since we were founded in 1479, we have lived through
– Fires in Copenhagen
– The Reformation
– The changing whims of various kings
– The British bombardment in 1807
– German Occupation
– and much more

All the time, university researchers were busy doing pioneering research in, for example, the speed of light, relativity and in existential philosophy.

Look around you here in the square. It looks well packed.
But actually this year’s admission of new students is slightly less than last year.
It is because we at UCPH are adapting admissions to the labour market.
But in a time where there is a large focus on quantity, we also insist on keeping the focus on quality.
Here at UCPH we maintain a high level of core academics, open and global cooperation, and a general education.

The university should never be trivialized into a job machine.
Today, you start your journey of discovery into the depths of UCPH. Into the inner core – the core of professionalism – if you will.
Studying at university IS a journey of discovery, where you slowly get smarter, and slowly reach the core of the subjects you study. And hopefully you also learn about yourself.
It’s hard work! And it requires discipline. Here at UCPH you don’t get your university degree while you are asleep. A university course is a full-time study.
In return, I promise you that it is all worth it. Both for society. And for yourselves.
Perhaps in the next few weeks, Lenin’s statement about what might happen in a few weeks should come to mind. At least you can look forward to some exciting weeks, months and years here at Denmark’s oldest university. And as Denmark’s oldest university, we have of course many traditions.
However, I promise you that your prorectors and deans will not be dressed in these traditional capes every day.

“The university should never be trivialized into a job machine.”

My personal favorite tradition is to welcome you all with a handshake here on the stairs behind me. Like in previous years, Prorector for Education Lykke Friis has promised to help me.
In the old days, students with this handshake promised to comply with university statutes from 1479, which was that:
“Students appearing lawless or carrying inappropriate clothing
or are quarrelsome, drunk, wandering around at night, whoring, stealing
and visiting pubs … should be suspended from teaching.”
Yes, you could even risk being thrown into the university’s own prison!
It sounds a bit strict.
Fortunately a lot has happened since these statutes were written.
Today I would like you to shake my – or Lykke Friis’ – hand and affirm the university’s core values: Insight, diversity, openness.

(the rest of the speech was in English, ed.)

Thank you very much for your attention.
Now it is time for an old tradition at our university.
I invite you to go up the stairs and shake my – or prorector Lykke Friis’- hand
on the core values of the university: Insight, diversity, openness.
Welcome to the University of Copenhagen!”