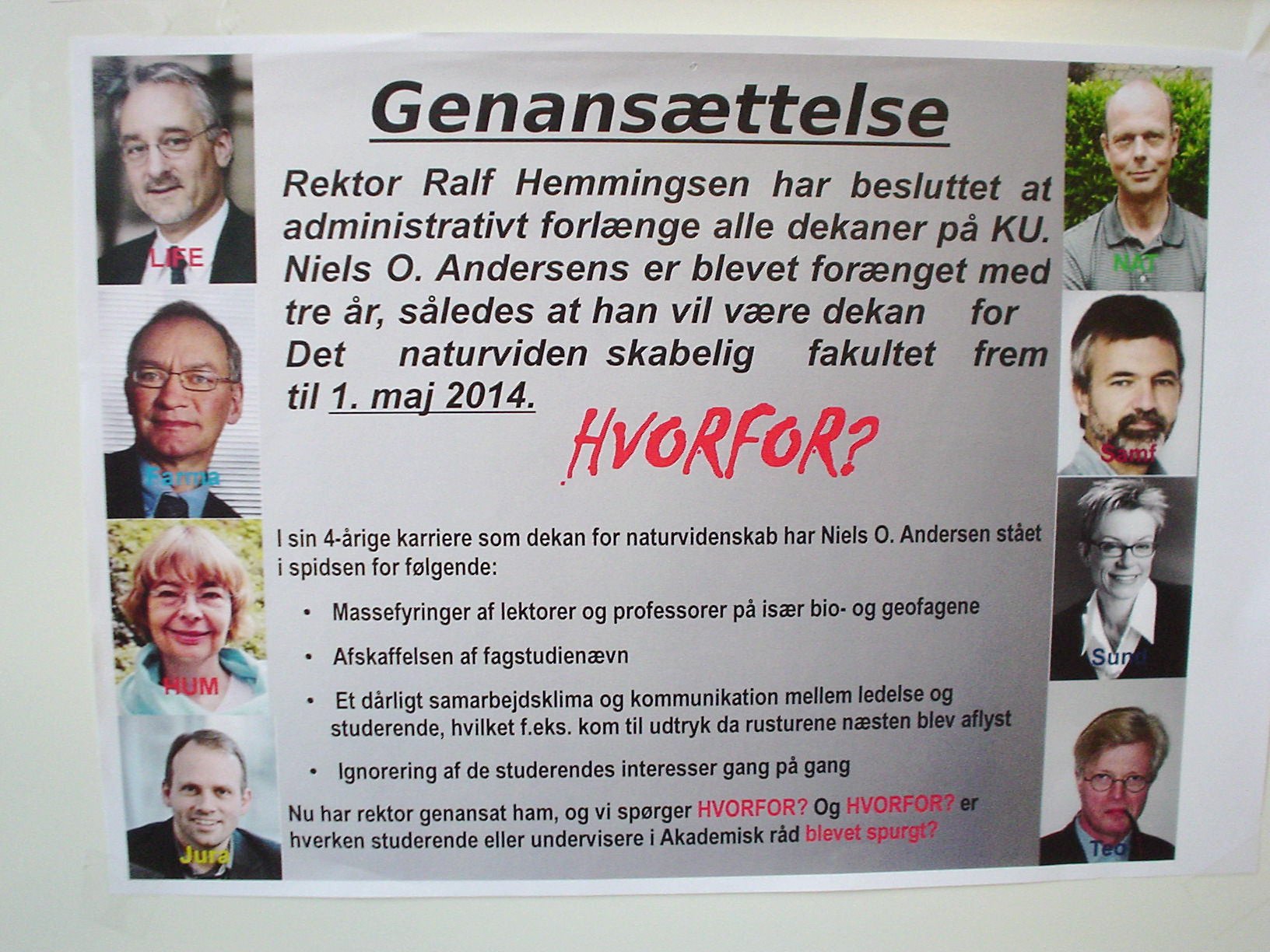 CAMPAIGN - This was posted anonymously on walls at the Faculty of Science, questioning the rehiring of the 8 deans of the University of Copenhagen, and criticising dean Nils O. Andersen for, among other things, his handling of the recent cutbacks at the Faculty.
image: Anonymous

Anonymous poster campaign against the rehiring of deans is a symptom of frustration at the lack of student involvement in the administration of the university, says Student Union

In a letter to our Danish sister paper, Universitetsavisen, Rector Ralf Hemmingsen criticises an anonymous poster campaign against the rehiring of the University of Copenhagen’s 8 deans. Posters have been seen at the Faculties of Humanities and Science.

Most recently, students and staff at the Faculty of Science have been met with posters with the question why? next to pictures of each of the deans, as well as a torrent of accusations against the Dean of Science, Nils O. Andersen. Among other things, citing his handling of the recent cutbacks at the faculty as a reason not to rehire him.

»Above all else, I find it totally unacceptable to put up anonymous posters that actually take a stab at the people in question. It is bullying, and is dismissed unanimously between the administration and the staff at the university,« writes Ralf Hemmingsen.

Rector also emphasises that the rehiring of deans is in accordance with the rules of contract extension, and that the decision is his to make.

Staff reps: wrong way to go about it

Ralf Hemmingsen is not alone in expressing a dislike for the posters. The staff representatives believe it is the wrong way to go about criticising the administration of the university.

»The B-side (the staff, ed.) agree that it’s bad form to criticise anonymously,« says lecturer Henrik Prebensen, staff representative at the Faculty of Humanities, following a meeting where the campaign was discussed.

Henrik Prebensen believes it is rectors job to hire deans. »There isn’t really much to discuss,« he says. »The dean’s have a five-year contract, with an option to extend for up to three years without notice. When the 5 years are up, it’s up to the rector and the dean to decide whether or not their contract is terminated.«

Staff will not take part in campaign

Poul Erik Krogshave, Vice Deputy of the University of Copenhagen academic council and union, HSU, doesn’t see the extensions as a problem:

»No colleagues have contacted me so far, regarding the extension of the deans’ contracts. Maybe because it is an extension that the administration have the right to make, and not a brand new hiring, so it doesn’t really warrant academic council,« he says, and adds:

»I assume rector will inform HSU of the extended employment, and I can’t imagine that any of the staff will take part in the anonymity.«

Head of the student union Studenterrådet, Anne Bie Hansen believes that it is the lack of involving students in the decision to rehire that is at the root of the anti-dean campaign.

»It’s not a constructive addition to a debate about the administration of the university, but rather an expression of frustration at not being listened to.« she says.

In Studenterrådet, people are confused that the rehiring is taking place without any prior discussion. Anne Bie Hansen points out that she and Studenterrrådet have attempted to start a debate about what a good dean should be like, but the discussion has been cut short by rector’s decision to rehire across the board.

»We know that the rector, under the current university law, technically has the power to make all the decisions, but it’s not always practical that he does« says Anne Bie Hansen.