Revealing the beauty of your own language 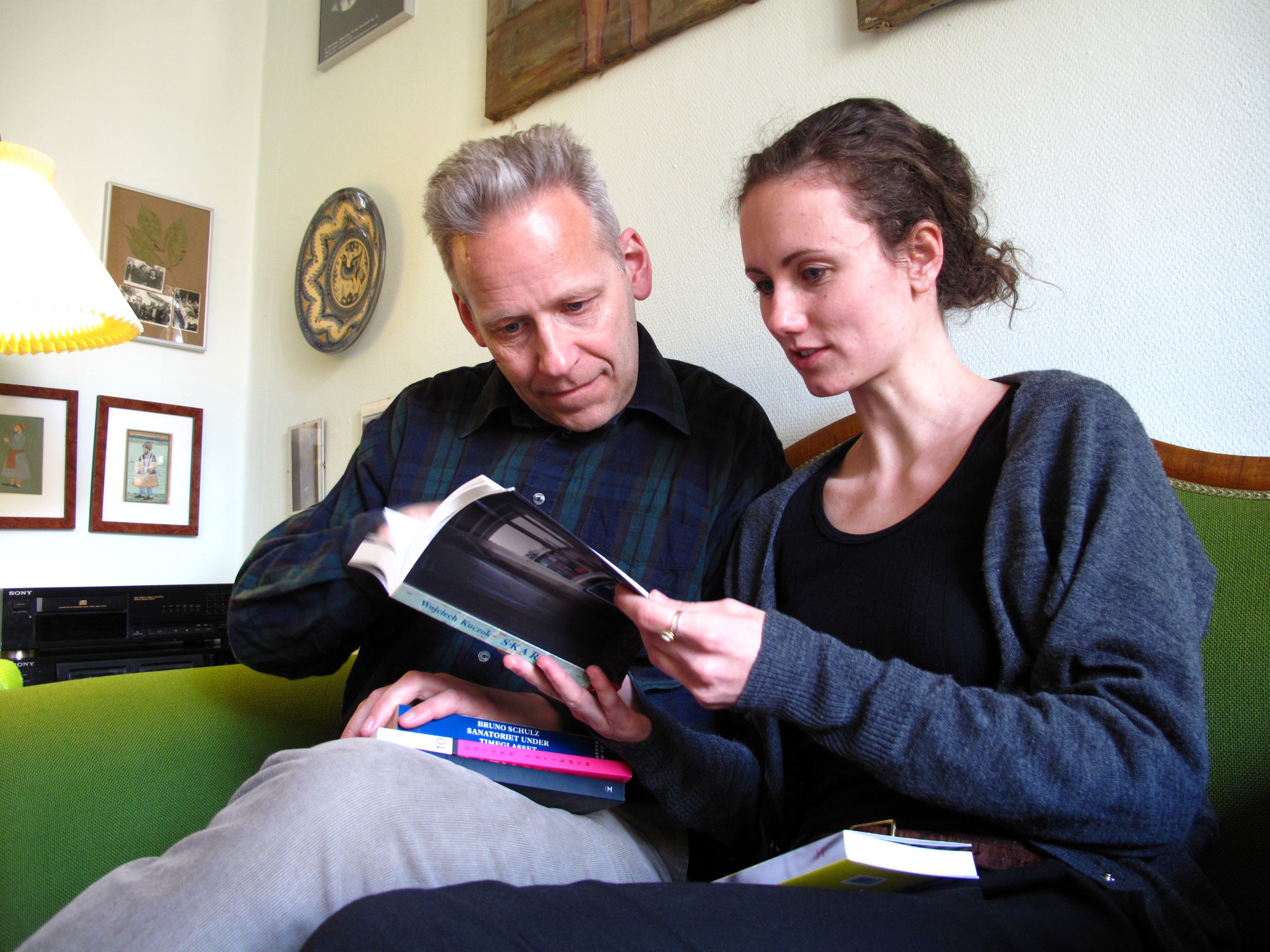 Judyta and Jørgen at home: »…Each sentence had to be perfectly logical. As simple and clear as the language of the lullaby.«
image: Daniella Sasaki

Two translators of Polish and German authors into Danish, talk about their journeys into unfamiliar languages and locations

»Danish is often considered an ugly language. Foreigners are probably not allowed to say so openly, but Danes may admit it. And that’s exactly the reason why we translate into Danish. To prove that its back-throated sounds can compose their own peculiarly beautiful music.«

Confessing such an unflattering opinion about your own native tongue doesn’t come easy. Therefore Judyta Preis and Jørgen Herman Monrad challenge this unfavourable impression with a well-chosen argument – they turn for support to the eighteenth-century German aphorist Georg Christoph Lichtenberg:

»In order to know your own language, you need to go abroad.«

In the foreign silence of Danish

Going abroad may help you to better understand your mother tongue. However, this understanding may come at a high price.

Although Judyta Preis regards Danish as her first language, she was born into Polish. She came to Denmark, when she was only two. Just after her arrival into her new homeland, she became mute for about a year. Then, equally unexpectedly, she uttered her first words of Danish.

Her mother tongue receded before the second language. She would no longer speak Polish, but she would act as a translator for her mother. Amused, Preis retells her first interpreting success:

»My mum had to buy radishes for a kindergarten party. So she took me to the supermarket and said: ‘Judyta, find rzodkiewki.’ And I did find their Danish counterparts – radiser.«

Through English back to Polish

Only as a student of English at the University of Copenhagen did Judyta start wondering about her ‘linguistic identity.’ Aware of her latent mother tongue, she studied Polish as her minor. Contemplating her own in-betweenness, she wrote her BA thesis on Jewish immigrant writers.

After her third year, Judyta worked as an intern at the Danish Cultural Institute in Warsaw. She wandered around the city, observing trams, milk bars and fishermen on the ice-locked Vistula.

»It all seemed strange and vaguely familiar.« She names these two qualities as inherent in the process of translation itself.

»It’s dangerous to think of who you are in another language,« Judyta comments on her quest.
Back in Copenhagen, thinking of her MA (which she defended with distinction in January 2010), she focused on Sebald, a German author who voluntarily chose England as his home. Sebald’s writing imaginatively recreates the condition of contemporary homelessness.

From Danish through German to Polish

Jørgen Herman Monrad, a philosophy graduate from Århus University, read German at the University of Copenhagen. In 1999 he went to Warsaw, where in one of the bookshops he pulled off the shelf a copy of Bruno Schulz’s collected stories.

The Polish-Jewish author was known to Jørgen mainly from German, since Danes had only one translation of Schulz at the time.

The Danish version of Sklepy cynamonowe (Kanelbutikkerne) appeared in 1964 and sat in Jørgen’s parents’ bookcase. Its unattractive cover embraced a world whose attraction Jørgen couldn’t resist.

Standing in the Warsaw bookshop, with the Polish copy of Schulz in his hands, Jørgen instinctively felt he would soon embark on yet another journey – to discover what Schulz himself was looking for: »where short circuits of sense occur between words« of another tongue.

»Isn’t Judyta a Polish name?« Jørgen asked, when they met.

The year was 2001 and the two of them were standing in front of yet another bookshelf, Jørgen’s bookcase. He thoughtfully picked only three authors: Joseph Roth, Herta Müller and Bruno Schulz. His choice could either communicate or miss.

As it turned out, Judyta would have selected the same three authors herself. Since that momentary recognition of their own provenances – real and literary – which strangely enough they had already shared, Jørgen and Judyta have been working as a team, both privately and professionally.

Into the language of the lullaby

Their first translation (five years in the making) appeared in 2007. The small independent publisher they approached didn’t agree to publish Roth, their first choice, but, surprisingly, suggested Schulz instead.

Jørgen and Judyta couldn’t believe their luck. That serendipity created its own challenges. Now their beloved author could rely only on their sensitivity, perseverance, hard work, patience, inventiveness.

»After our re-writing, each sentence had to be perfectly logical. As simple and clear as the language of the lullaby.«

Listening for the back-throated music

Judyta prepared a rough version; Jørgen reworked it; drafts shuttled back and forth between the two translators at least five times. Co-translation created its own tensions. The team shrugs them off with a perceptive remark:
»We impersonate the schizophrenic relationship between the original and the translation.«

Their routine is defined by their enormous sense of responsibility: under-recognized authors who work on the fringes of their communities, cherishing their own minority languages against all odds, are rarely given a second chance to find out how they may sound abroad.

Translating Schulz, they honed their own method.

»We edit, re-edit and self-edit; we are very critical. Also, we read aloud to each other for assonance and consonance.«

Both Judyta and Jørgen have musical backgrounds, so in their readings the musicality of a given passage must find its way into Danish. Likewise, every author they admire has their own specific music.

»As translators, we will need to maintain Sebald’s heavy German syntax,« says Jørgen.

At the moment Judyta and Jørgen are working on the correspondence between Paul Celan and Ingeborg Bachmann.

To know Celan’s language better, they have visited Czernowitz, the former capital of Bukowina, the province that once belonged to the Austro-Hungarian Empire and now is part of the Ukraine.

»When Celan lived there, he could hear Romanian, German, Swabian and Yiddish,« says Judyta.

Apart from looking for languages no longer spoken in Czernowitz, Judyta and Jørgen wanted to see the chestnut trees that used to grow outside Celan’s window. Ash trees have replaced them, but an elderly Jewish man they met confirmed: Celan could indeed see chestnut trees through his window.

To locate trees familiar to a foreign author and make them grow again in another language.

Polyglot milieus attract with their linguistic, ‘musical’ and cultural capacity for growth and cultivation. Jørgen observes that the authors they’ve been drawn to as translators benefited from the multiculturalism of the Austro-Hungarian Empire. When queried, he admits to his rather nostalgic view of this imaginative construct:

»I believe we’re writing from the sense of loss.«

But the team is equally aware of their gains, frequently immaterial. Judyta and Jørgen have rendered their ‘marginal’ authors visible, even though their own names do not feature on the covers of their translations. (By comparison, American and British translators have already won this fight for their visibility.)

Through translation Judyta and Jørgen have also rendered audible the third language Walter Benjamin wrote about in The Task of the Translator. They hope that every co-translation brings them closer to »this mystical language between the original and the translation, present in its absence.«