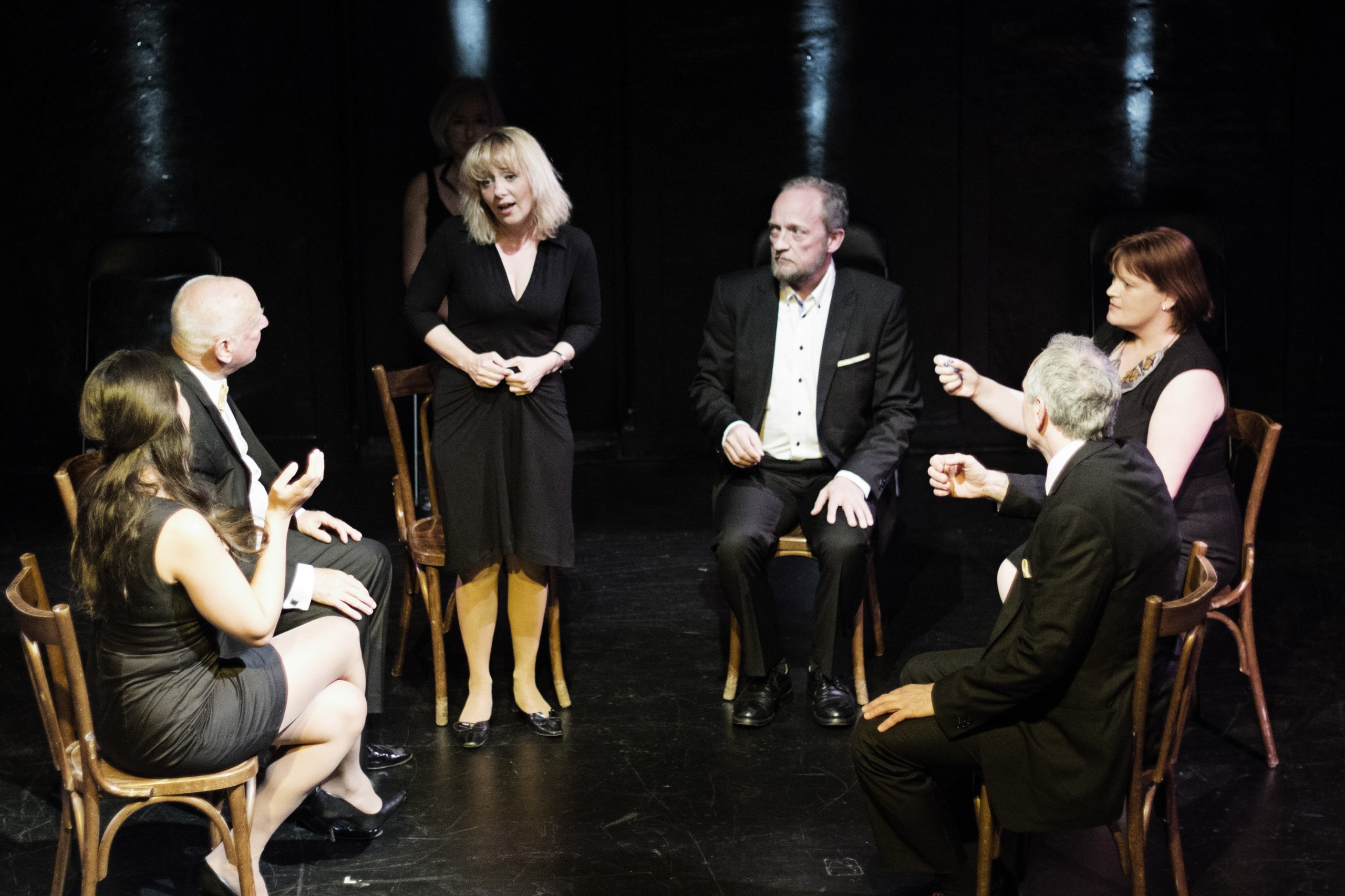 With the audience settled into their seats in the small, modest theater, a young man in black welcomes and thanks everyone for coming. After making a bit of friendly and informal small talk, he introduces himself as the ‘host’ of the dinner party, as well as its musical accompaniment.

More specifically, as soon becomes clear, he is in fact the unauthorized host of the play, an omniscient fixture throughout the different narratives. He also happens to provide a live, acoustic soundtrack for nearly every scene. Though ‘The Dining Room’ is unorthodox in its presentation (the hosts omniscience is flexible, as he occasionally interacts with scenes and takes on the role of a character in one) this actually works out remarkably well in conjunction with the theater space, with the music creating an intimate atmosphere as the plots unfold.

The play itself is a mixture of vignettes that are intended to illustrate different families’ stories. As discussions center around and unfold in the dining room, we are given a snapshot of their trials and tribulations. Members of the large cast come and go, often in overlapping, rotating roles.

The Dining Room, a classic from the American modern theatre, was originally written about the decline of WASP (White Anglo-Saxon Protestant) society in the United States. The Copenhagen Theater Circle version, directed by Jeremy Thomas-Poulsen, has been somewhat updated from the original to be more contemporary and relevant, as well as altered to be based in Europe. In seeking relevance for the current audience, several references to Denmark (as well as Malmo) were even incorporated into some characters’ dialogue.

This modern twist and reformulation for a Copenhagen audience could be seen working both for and against the play. With the original Northeast US setting gone, which was a grounding narrative aspect of the original, the WASP society scrutinized throughout the original instead takes on a vaguely European vibe, though still containing scenes directly addressing WASP society itself. In this way the societal critique becomes a bit fragmented—the audience is left searching for a common thread to unite the varied storylines.

Alternatively, the updating of this play for its current setting is effective in the sense that wealthy White Danish Protestant society can possibly be seen as entering a period of upheaval and transformation as Denmark modernizes and diversifies, just as was happening with WASP society when the original play was penned. As the program itself states, “Here we see the same longing for and fear of traditions dying out”. This is especially appropriate as – in an abstraction of this concept – the English-language theater exposes us to a diverse cast from many different backgrounds.

Without spoiling any of the assorted plots, the play concludes with the ensemble cast — and their different characters — uniting onstage. Despite having been established as occupying differing roles in differing time periods, they all unexpectedly and briefly coexist to deliver their own collective “moral” to the story.

This concluding unity of characters (of which there is no permanent “main” character) from the Dining Room’s multi-reality universe, all meet up for a quick change in consciousness before their final bow. The plots and places in time coalesce to give us their overarching lesson learned, and the collectively decided moral is the same: that familial bonds, and human relationships, are what matter most, regardless of all else.

See more information on how and where to see the play in the fact box upper right.