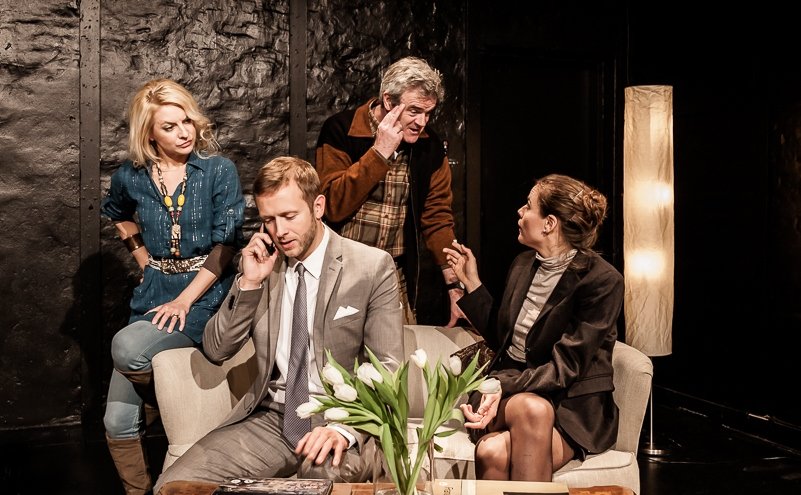 Two children get into a playground fight and their parents decide to meet to talk things through. The two middle class couples politely discuss their sons’ behaviour over coffee and clafoutis.

But soon their bourgeois façade begins to crumble. The conversation starts spiraling out of control when one of the guests throws up all over the coffee table.

Slowly and steadily, the adults turn into children themselves, and through shouting matches and temper tantrums (and aided by a significant amount of rum), their underlying hypocrisy is exposed. The thin veneer of civility is shattered and their suppressed frustrations and latent unhappiness are brought to the fore.

In the English (or rather, American) translation by Christopher Hampton, the play went on to win both a Laurence Olivier Award and a Tony Award for best play and was turned into a critically acclaimed film starring Kate Winslet and Jodie Foster and directed by Roman Polanski.

This means That Theatre Company’s adaptation of the play has big shoes to fill, and the performance under the direction of Harry Burton is certainly a success.

Yasmina Reza’s play lives off its fast-paced and interwoven dialogue – after all, there are no scene changes and no intermission – and the international cast (two Danes, a Brit and a German) lives up to the challenge as a group of nice people behaving more and more terribly.

Sira Stampe gives a wonderfully aloof Annette, increasingly frustrated with her lawyer husband Alan (a very sleazy Adam Brix) who seems more attached to his phone than his wife.

Katrin Weisser plays overbearing and self-righteous Veronica, an art historian writing a book about Darfur, and Ian Burns, artistic director of That Theatre Company, manages to give her husband Michael, arguably the cruelest and least likable of the four characters, a hint of humanity.

Unsettling and all too familiar

After a bit of a slow start, the pace picks up, and the energy levels rise.

The sound cues are impeccably timed, and the clever set design supports the cast without being overwhelming (the entire play, after all, taking place in one living room) and makes the small stage at Krudttønden seem surprisingly big.

While funny and at times tragicomic, the play never errs on the side of slapstick. The complete breakdown of societal rules of behaviour is at once hilarious and unsettling and at times all to familiar in its immediacy.

See God of Carnage at Krudttønden in Østerbro. For more information and tickets, see the Fact Box on the top right.