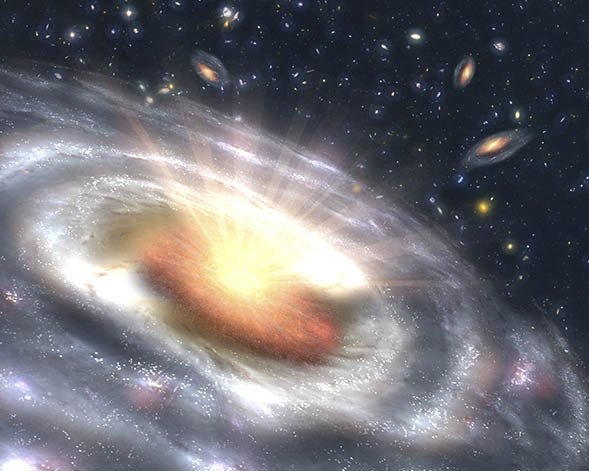 An artist's concept of a growing black hole, the centre of a quasar in a faraway galaxy
image: NASA

A pair of primordial black holes, formed soon after the Big Bang, have been discovered by an international team of researchers which includes a University of Copenhagen astrophysicist

A new pair of black holes, so far away that they must have been formed early in the Universe’s history, have been discovered by an international team of astrophysicists.

The Big Bang is thought to have formed our universe about 13.7 billion years ago. The newly discovered black holes appear to be about 13 billion light-years away from Earth. So scientists are seeing them as they looked less than a billion years after the birth of the universe.

Together with colleagues from the US and Germany, astrophysicist Marianne Vestergaard of the Niels Bohr Institute’s Dark Cosmology Centre observed 21 black holes, the centre of visible quasars, in the distant universe. Two of these black holes have caused something of a stir.

»Previously, when we looked at black holes, they always had the same structure. They were mature and were surrounded by warm dust. These two black holes do not have warm dust around them, which is curious,« explains Marianne Vestergaard.

Gas from the beginning of time

»The further out we look, the further back in time we can see. If we get far enough back then we would expect to see fewer heavy elements and little dust. Now we have actually found some quasars without warm dust. These may be made out of the pristine gas that the universe was made of,« explains Marianne Vestergaard.

As well as being dust-free, the two black holes are remarkable for their small mass, relative to those in other quasars.

This indicates that they are extremely young and at an early stage of development, says Marianne Vestergaard.

»Over time, black holes can only get bigger. They can ‘feed’ at different rates, so a smaller black hole could be born at the same time as a larger one, but just feed more slowly. But they cannot go on a diet or get smaller,« she explains.

The lack of dust in the two anomalous quasars caused the researchers to take a closer look at the other newly discovered black holes in the distant universe. They found that in the other, more ‘normal’ black holes the amount of dust correlates to the mass of the quasar. The larger the hole, the more dust there is.

»It appears that the amount of warm dust grows with the mass. They grow together, hand in hand. A bit like childhood friends.«

The new findings can give researchers a better understanding of how galaxies grow and form, says Marianne Vestergaard. It can also help them understand how dust is formed.

The team published their discovery in the 18 March issue of the scientific journal Nature.