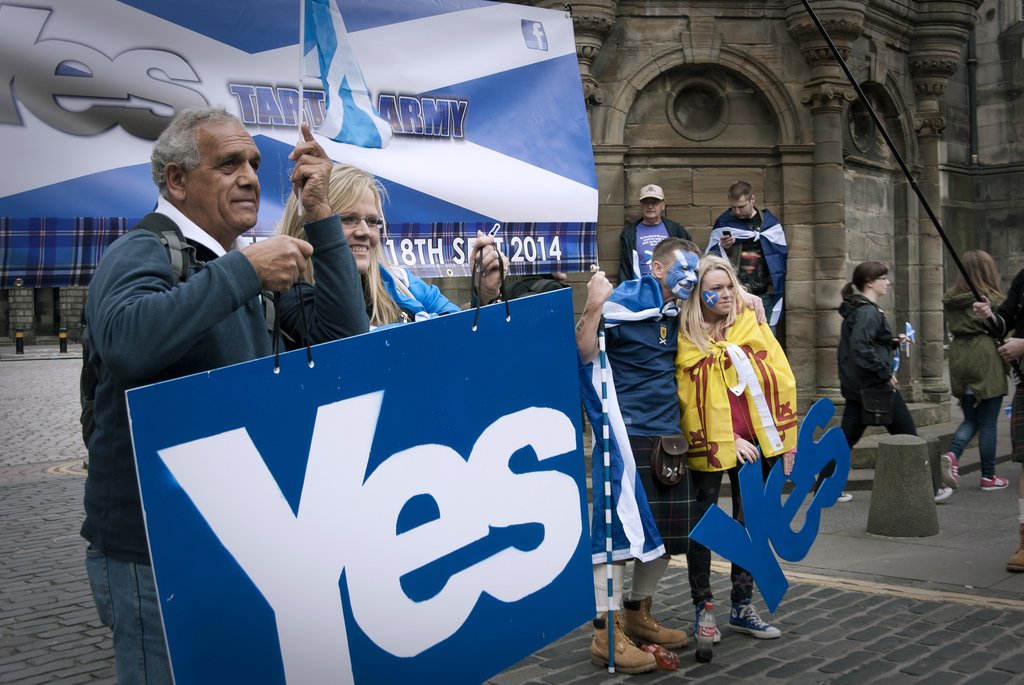 Six months before Scotland votes on whether to stay a part of the United Kingdom
image: marianavarrosorolla

With exactly six months to go before the September 2014 referendum on Scottish Independence, Rachel Barr reviews the student press on the potential United Kingdom split

In less than six months Scotland will be voting on whether to stay as part of the United Kingdom. A vote that could have huge consequences for universities and university students there. Not surprisingly, the student press in Scotland has been focussed on the issue.

Think seriously about independence, writes Miles Adams for St Andrew’s The Saint – echoing the words of the UK Prime Minister David Cameron, who this year spoke of the repercussions of September’s referendum.

Talking to the campus on the issues of Scottish separation and the consequences to St Andrews, reactions of students are mixed. A clearly important issue to many is that of tuition fees – in Scotland, it is currently free to attend University, though students from the rest of the UK continue to pay fees to the same institutions. In an independent Scotland, this might change.

A third year geology student interviewed stood firmly against independence on the grounds that: “The [Scottish National Party] claims that tuition fees for students will remain free, but with no stable economic plan for a post-independence Scotland I find it hard to believe this will be the case, not to mention the difficulty that will face English students who will technically become international students with the possibility of increased fees”.

Research grants are just as much at risk as tuition fees, chips in Riley Kaminer at Edinburgh University’s The Student . The article – which discusses the risks to university research in an independent Scotland – comes off the back of Aberdeen University’s Professor Pennington’s comments on the damage of the union break could mean to the nation’s higher education. Currently, Scotland takes a ‘disproportionate’ share of UK research funding and attributed the success of British science to the “two way traffic of ideas, money and people across the Border”.

Fund education, scrap Trident, says Sam Beaton for Glasgow University’s Guardian, referring to the UK’s submarine nuclear missile system with bases in Scotland. Less than thirty miles from Glasgow are 180 Trident nuclear warheads which will be replaced in 2016 at a cost of £100 billion.

“At the same time as arming Britain to the teeth with nukes, we are seeing cuts to Higher and Further Education” – Beaton continues – “Education is a right and not a privilege. We need to scrap Trident and fund education…Voting for independence guarantees a Britain free from nuclear weapons”.

Either way, there will be change

Scotland’s economic future is merely a tool used for scaremongering as part of the No campaign, according to campaigners at the recent Radical Independence Conference (RIC) Scotland. Also featured in Edinburgh’s The Student was coverage of the 2013 conference, which saw over 1000 delegates congregate in recognition of the need for “radical social and economic change”. Talking about everything from austerity, the monarchy and an Independent Scotland’s rejection of nuclear weapons, the conference aimed to assure people that a Yes vote was “…not a vote for the SNP”.

Either way, The Scottish people as a majority want decision making powers to be held in Edinburgh, not London, concludes Scottish Student Newspaper The Journal. Though not necessarily voting in favour of Independence, 74% of those surveyed want power to be held in Holyrood, in contrast to the mere 24% of those asked who would entrust decisions for the nation to the Westminster government. Speaking to The Journal, Edinburgh MSP Jim Eadie – representing the SNP – remarked:

“The debate in Scotland is no longer between change or no change – it is about the kind of change we seek, and the right of the people to choose their future in a free and fair referendum.”

The referendum will take place throughout Scotland on 18 September 2014.

(This article was originally published on Pandeia, a network of student journalists and partner of the University Post.)