Second batch of textbooks makes it to Ethiopian universities 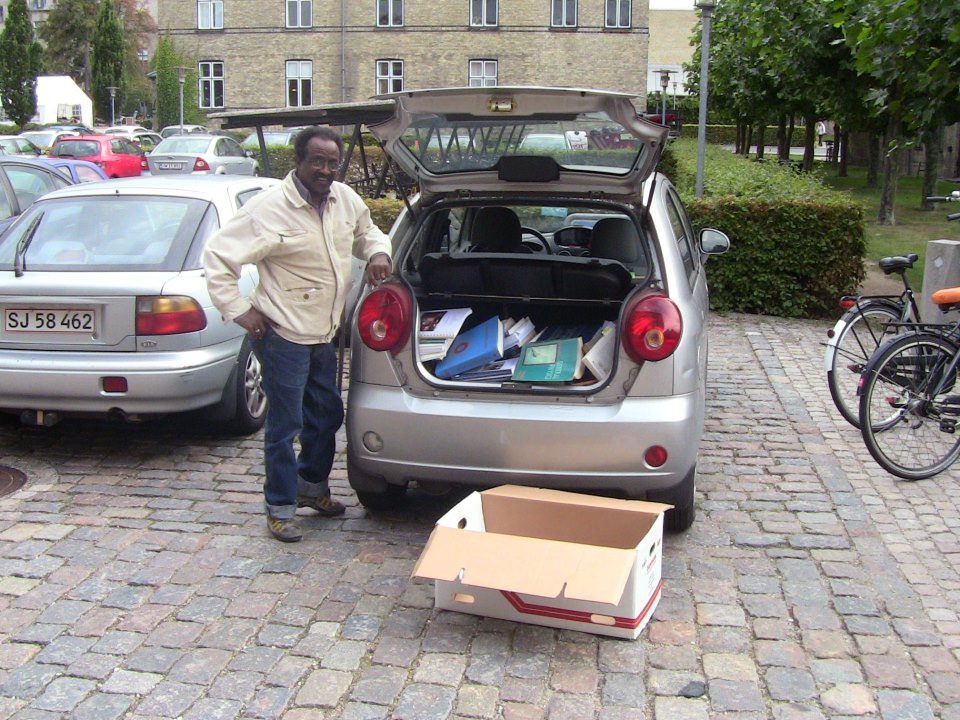 This is how you move a whole lot of textbooks: Tadesse Asmelash, an Ethiopian volunteer, helping transport them. The books came from Denmark's Technical University, the Faculty of Health Sciences and the former Faculty of Life Sciences
image: Fikadu Reta

Volunteer student initiative has successfully shipped used textbooks to Ethiopian universtities for a second time. Now reaching even more libraries throughout the country

Last year the University Post reported on the the challenges facing a student initiative to send a second phase of used books from The University of Copenhagen to newly established universities in Ethiopia.

After much coordination, organiser Fikadu Reta Alemayehu now reports that a second, larger round of textbooks has been distributed amongst Ethiopian Universities.

The initiative started in 2012 when the University of Copenhagen announced that it would burn excess books no longer required by the Humanities Library. The controversial book burning plan was subsequently stopped following government intervention. But Fikadu, then a life sciences Student in Copenhagen, was with fellow students inspired to organise shipments of used books to Hawassa University in his homeland.

While the first shipment arrived at one university in South Ethiopia, the second shipment contained even more donated books and was distributed amongst three public universities in other parts of the country.

Wachamo University received 168 books, while Mezin-Tepi University and Wolaita Sodo University each received 154. The considerable number of book donations also meant the transport cost was higher. Fikadu, now a teacher, reports that the shipment from Denmark to Ethiopia took place via the Ethopian Embassy in Frankfurt.

According to the Facebook group, the second shipment involved eight boxes with a total weight of 390 kgs.

“I think, so far for both first and second phase shipping of books, we paid a total of more than DKK 15,000 for transporting the books to Ethiopia. We fundraised about DKK 7,000 on Facebook from Ethiopians in Denmark,” he says.

The South Ethopian Peoples Development Association supplemented the cost of the shipment from Germany to Ethiopia.

“It’s been a huge effort.” says Fikadu, who acknowledges the support of various organisations in Copenhagen such as Frederiksberg Hospital, the former Life Sciences faculty and local volunteers.

“The University Post did help us a lot while we were asking for used books donation and during fund raising for the shipping costs,” says Fikadu, “but please mention also Anne Sophie Vinther Hansen and Pernille Bohn, outstanding Danes that did tirelessly work in making our books drive a reality. By the way, these two girls were my motivation. They are very good examples of dedication and the fact that people are ready to go beyond borders to help others.”

“Marianne Grützmeier head of the KU Life library did also help us a lot, and a library staff at KU Life – I dont remember his name – made a very special book collection box he gave us in support of our initiative. He did also prepare a special key made for the purpose of keeping donated books in a locked box until we move them from the Library to Frederiksberg Hospital.”

“Anne Sophie Vinther Hansen’s father from the Frederiksberg Hospital did also help us a lot by providing storage place for donated books until we shipped them to Ethiopia. There are many more that did help the initiative in different forms in addition to those who donated books and who paid for transport cost,” says Fikadu Reta, who also mentions Mrs Zebenay Adane from Germany who played a role in transporting the books on to Ethiopia.