Here are the most expensive areas to live in Copenhagen 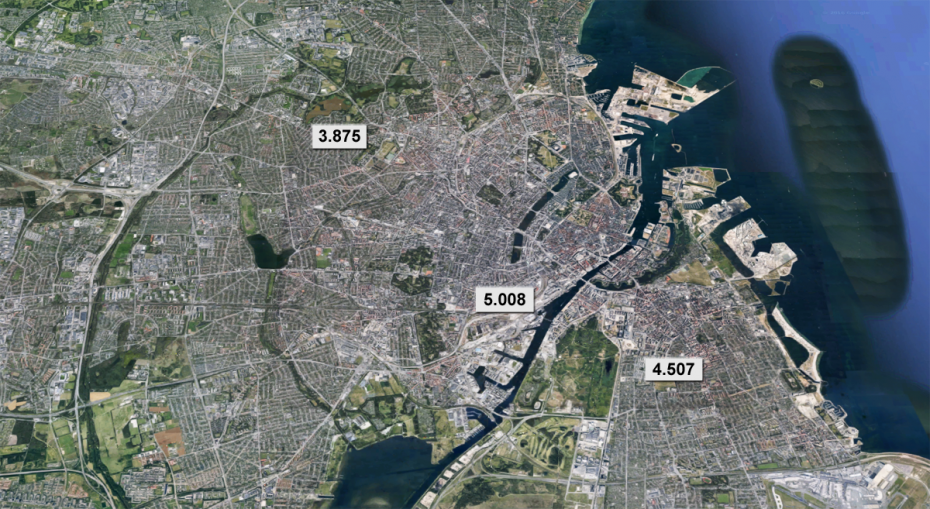 In just three years, average rent has increased by 19 percent in Copenhagen. ”A large increase,” according to one consumer economist, with prices rarely under DKK 4,000 a month

Copenhagen is becoming a more and more expensive city to live in. At the bottom of this article you can see an interactive map showing the different city areas of Copenhagen with the price increases on renting a single room.

The lack of housing for young people, and the increase in student numbers, has boosted the price level for room leases and small apartments. In just three years it has become 19 per cent more expensive to rent a room in Copenhagen, according to Boligportal.dk which is one of the largest rental listings. This is according to a price comparison which the listing has done for The University Post.

Vesterbro the most expensive, Brønshøj the cheapest

At the same time, the price comparison shows that towards the start of studies in September, there is not one single city area area, with the exception of Vanløse and Brønshøj, where prices for a room are under DKK 4,000 a month.

“The market is under pressure towards the start of the semester, and landlords can ask for a good price” – Ann Lehmann Erichsen, consumer economist at Nordea

The numbers show that money can be saved by moving away from the central city areas like Vesterbro, the most expensive on the list, where average rent in 2016 for a room was DKK 5,008 a month.

After Vesterbro is Inner City and Østerbro, while the cheapest rooms are to be found in Brønshøj and Vanløse, where prices can just sneak under DKK 4,000 a month.

By moving from Vesterbro to Brønshøj, you can save DKK 13,000 a year, according to the price comparison. This would be enough to cover expenses for your books and even offer a round of drinks every weekend at the Friday bar.

The 19 per cent price increase over three years comes as no surprise to Ann Lehmann Erichsen, a consumer economist at Nordea who is often involved in analyses of student spending.

“Everyone knows that rents go up, but 19 per cent is a very large increase, even in Copenhagen,” says Ann Lehmann. Nationally, according to her data, students pay an average of DKK 3,300.

The economist says that part of the increase is related to the heated market for room leases in connection with the start of the semester every year.

“The market is under pressure up to the start of the semester, and landlords can ask a good price, and they apparently do so too. It is the landlords’ market right now,” she says.