Shaky hands before the performance 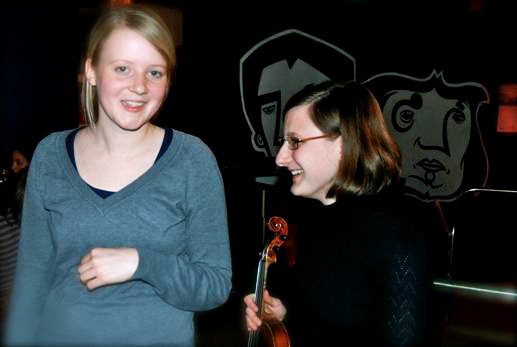 Birte and Anne have played for years, but they still get a little nervous

The two German exchange students Anne Oleischeck and Birte Dreier have played in the University of Copenhagen orchestra since the very beginning of their stay last semester in 2009.

»It was a coincidence really. It was through someone we knew at the intro-days here«, Anne explains.

»And there were more English-speaking students in the beginning,« Birte adds.

See our photo gallery of the orchestra here.

University orchestras are old news back in Berlin, so they were happy to find a place to play in Copenhagen. Studying Scandinavian Studies and Political Science, both Anne and Birte are fluent in Danish.

But is it a good way to meet new Danish friends?

»We’ve made some friends, but it is mostly socializing along with the music,« says Anne.

By word of mouth

Conductor Kristoffer Kaas is happy with the big turn-out for the Orchestra, which has grown in numbers. They are now fifty students.

»A lot is by word of mouth. That’s how it all started too. We also have posters and stuff, but since we are not fully established, we do not yet have a clear strategy,« he says.

There are at least enough to fill the University of Copenhagen’s concert hall, in this case the Ceremonial Hall, with music. Certainly with a little help from the orchestras’ Swedish friends in ‘KTHs Akademiska Kapell’. The big collaboration concert is to be held the 8th of May.

See the article ‘Orchestra tunes up for big concert’ here.

This is my hobby

»It’s exciting. I always get shaky hands even though I have played for 15 years. And my mom is coming, so I am really, really looking forward to it,« Anne says, giggling.

Partly for social reasons, partly for musical reasons, the Danish-speaking Germans have been at almost every rehearsal.

»It’s nice to do something in the middle of the week. And it’s my hobby, so why shouldn’t I go?«, Birte asks rhetorically.

Anne looks at her, adding »and we always have cake«.