She has the solution to the housing crisis 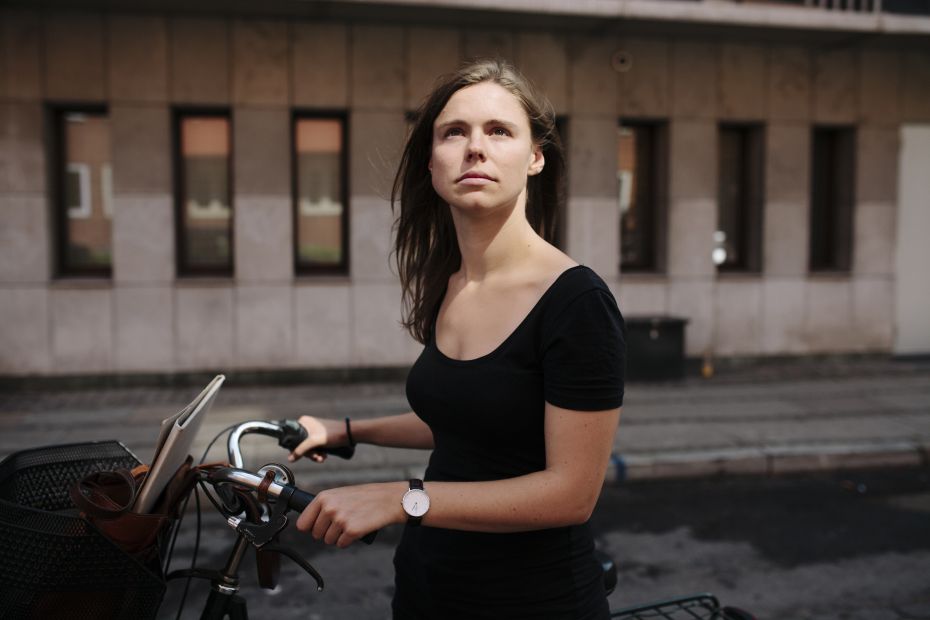 There are abandoned office buildings throughout Copenhagen. Yet 9,500 young people have no place to live. These two things just don’t square up, says a just graduated architect, who wants to rebuild no-longer-viable commercial property into modern homes for young people

”I cannot even imagine a Copenhagen with no space for young people and students. They bring creativity, drive and commitment to the city, and we should solve the housing crisis so they can live properly.”

The words are from Pauline Faaborg, a just-graduated architect with a plan. Her thesis was so good that it was given special mention as one of the best of the year at The Royal Danish Academy of Fine Arts, School of Architecture, and which so far has landed her several job interviews and an article in the Danish newspaper Berlingske Tidende.

I have taken the bike with her. Over the Langebro bridge, we are now at Leifsgade 33, not far from the Faculty of Humanities, UCPH. This is where Pauline’s plan is. Something she calls ’Waiting Houses’, or Ventende huse, and which is to put a roof over the heads of the city’s homeless students.

”Look at this building,” says Pauline Faaborg and grimaces, revealing that the just-graduated architect finds no pleasure in Leifsgade 33’s square office domicil.

”As it stands, the building is a stranger to the street. It is boring and without identity. The building is constructed in the 1970’s and designed in a way that you put your bike on the street, take up the elevator to the office and take off quickly for home again when your workday is over at 4 pm without getting involved in the city environment.”

Pauline Faaborg takes well-practiced steps into the yellow concrete building with blue and white-painted windows. She knows the corridors, the construction, and the floor plan by heart and leads us via the elevator up to the sixth floor rooftop terrace. She takes out her file with her graduation project to show us her plan for Leifsgade 33 – and the rest of the city’s empty commercial properties.

In Greater Copenhagen there is a total of 1.17 million square metres of empty office property waiting to be either re-built or demolished, explains Pauline Faaborg.

At the same time, many of the city’s young people have a hard time finding a place to live that they can pay for. Every day at the start of the semester you can read stories in the press about desperate incoming students having to pay DKK 5-6,000 or more a month for small rooms on the outskirts of the city. And according to the Danish constructors’ association Dansk Byggeri there is a shortfall of nearly 9,500 homes for young people in Copenhagen – up 1,000 from last year.

Taking a tour of Leifsgade 33

“It doesn’t take more than a Facebook check or a quick look in the newspaper to realise just how many young people are in need of a proper place to stay in this city. So why not do something about it?” Pauline Faaborg asks rhetorically as she searches the Amager skyline.

“I started to do some research and found out just what an incredible amount of commercial property is standing empty. 1.17 million square metres, and this is just in Copenhagen. Many of the buildings are the slightly sad properties of a time when the specifications were different, and that is why they are empty today”.

When Pauline started up her dissertation work, her thoughts kept on coming back to the empty office buildings. Instead of designing wild and expensive private apartments she decided to attempt a constructive solution to the youth housing problem. A solution that in architect-language is called property transformation: You change something that already exists (that is: an old shack) to something that can be used again, by rethinking the building.

The Leifsgade property has been half empty for years, and has had a series of tenants. Pauline’s project is to transform the heavy, sad commercial property into 55 nice homes for young people.

“Maybe it is cheaper to throw up a container park on a field outside the city, but it will do nothing for the city environment,” Pauline Faaborg, just graduated architect.”

The facade is to be changed, and work is to be done to ensure light in the dark building, so all apartments will have large windows and French balconies. No nice home without a place to take care of hunger and hygiene, says Pauline Faaborg, so all the project’s flats get their own small kitchen, toilet and shower.

It is small, around 40 square metres per flat, but it looks light and nice on the drawings. Too bad it is not reality, you think, and Pauline Faaborg nods her head:

”The building is not suitable for large private apartments, but everything that you need as a young student is available here,” she says, and leads us on through the office spaces in Leifsgade.

Pauline Faaborg shows us the drawings from her graduate project

Playroom for an architect and dreamer

The lifts look like something from a run-down hospital. The walls are white with a touch of nicotine yellow, and it is slightly dirty and generic. Up on the balcony the weeds have shot up through the cracks in the tiles, and inside the small windows and low ceilings give you a sense of being in a kind of den.

A special needs school has recently leased the lower floors, and craftsmen are now making the rooms more inviting. Leifsgade 33 is no longer completely empty, but this does not worry Pauline Faaborg. Other equally suitable buildings are only a short bike ride away, she says.

”I could have taken alot of buildings as my starting point, as more than a million empty square metres gives you plenty to choose from. Especially here in the Amager and Nordvest districts, where they built a large number of low-quality office buildings in the 1970’s. Most students would be very happy to live there today,” she says.

“Many of the properties I have looked at are ugly and do not express any sense of identity – that’s probably why they are hard to rent out,” says Pauline Faaborg as we file through the obscure offices.

“Nowadays they build offices completely differently than 30 or 40 years ago. At the time, they didn’t think of working environment, common areas, lighting and height to the ceiling. That is why the buildings will also be hard to lease out in the future. Even small companies demand more from their work spaces. But this does not exclude making small cosy apartments for young people out of the buildings. Often it is almost like being in a playroom, so long as the supporting pillars are preserved,” says Pauline Faaborg.

”Copenhagen is not just about kids, dogs and hedges”

But can it be done? All these transformations and restructuring of empty office buildings? And if the idea is so good, then why has nothing come of it ages ago?

“Yes, it should be possible,” says Pauline after a little reflection. We are back on the balcony with view over the city.

“I am an architect and most of the solution depends on the politicians. But why not?” Pauline Faaborg asks and continues:

”We are a country that wants our young peope to educate themselves. Part of this is giving the students the opportunity to live properly. Maybe it is cheaper to throw up a container park on a field outside the city, but it will do nothing for the city environment,” she says.

Her solution is not the cheapest, she admits. But many of the ideas can be realized without too many costs, and to the advantage of both Copenhagen and the many house-hunting students. And it is a constructive way to transform old offices that otherwise would just be waiting to be demolished.

Copenhagen is not just about children, dogs and hedges. It should be a place for young people, families and older people at the same time” Pauline Faaborg

“We should be careful not to make it all nice and expensive. The charm of cities is that people are different. For many years, only large family-friendly apartments have been built. They cost a lot of money and are too expensive for students. But Copenhagen is not just about children, dogs and hedges. It should be a place for young people, families and older people at the same time,” says Pauline Faaborg.

Where there’s a will there’s a way, says the newly graduated architect, while she packs up her drawings. The Torpedohallerne on Holmen are a good example of that, she says. Here an old building from the fifties was turned into 67 new apartments instead of being demolished. But it was 67 expensive and luxurious condos – and not youth housing affordable for students.

“I have no objection to expensive and nice apartments being built, but there has to be a balance,” says Pauline as we leave Leifsgade 33.

After many years of expensive new buildings in Copenhagen it finally seems as if the balance is starting to tip in favour of the students. In 1995, as a result of the city’s failing finances, Copenhagen introduced a building freeze to all youth housing in the hope of pulling resourceful and tax-paying families back to the city.

Now the building freeze has been cancelled, and the municipality has allocated funds for 2,800 homes for young people.
And in the new Planning Act, which sets the framework for future urban development, the country’s municipalities retain the right to require that a quarter of the homes in new residential areas be supported social housing.

We don’t know whether the city’s future youth housing will be built like Pauline Faaborg wants them, but there are many available ideas if the municipality needs inspiration.

Before we bike home over the bridge, we take a tour on Amager, where Pauline Faaborg shows us more of the many derelict office buildings.

“There is a huge potential in rebuilding. And as you can see, there is enough to choose from. It’s just about getting it done,” she says as we pass several empty office properties close to the Faculty of Humanities. With a loving hand and an offbeat idea they might, or might not, be the future home of tomorrow’s UCPH students.