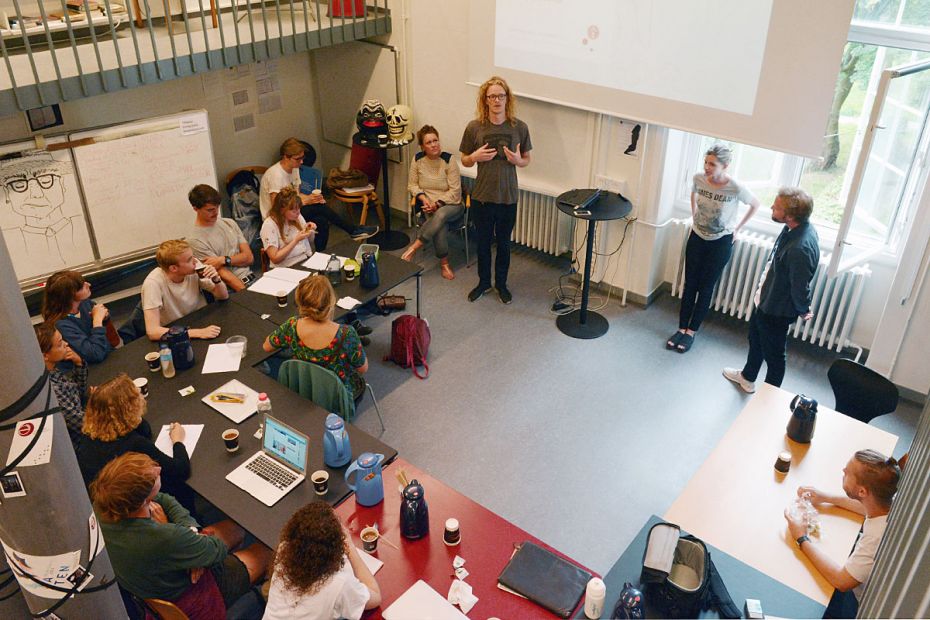 Department of Sociology decided to stop class teaching in key first semester subject. Now the students respond by organising their lessons themselves

“Good to see you! Because we will damn well make sure that everyone is allowed to be taught General Sociology”.

16 students sit in a row, smiling and nodding. They are volunteers who in a few weeks time, can not only can write ‘sociology student’, but also ‘teacher’ on their CV.

They are to take over from the University of Copenhagen after it chose to close all class sessions in the subject General Sociology. Now dissatisfied students will teach their younger fellows on the first semester.

In front of them is Daniel Frantzen, who with four other students has taken matters into his own hands and invited future teachers to a teaching seminar at the Department of Sociology. They are both angry and happy: Angry because the Department of Sociology has cut back on the classroom lessons. There is now only one weekly lecture of two times 45 minutes, with none of the dialogue, debate and critical questions, which they know from the class sessions.

Happy because the students of Sociology now fight back. Not with demonstrations or blockades, as we have seen previously. But with 16 new teachers, all sociology students, who don’t get a cent for teaching the new group of first semester students in the subject.

Shot themselves in the foot by removing classroom teaching

Names and greetings are exchanged. Most volunteers are older bachelor students who remember clearly their own classroom teaching, which their new fellow students will now miss.

They have all signed up for one or two thinkers whose ideas they will teach in the autumn and the coming spring. Max Weber, Emile Durkheim, Karl Marx and the Frankfurt School are in high demand.

”The Department is shooting itself in the foot,” – Steen Lybke Smith, upcoming teacher

One of the volunteers is Steen Lybke Smith, who is studying his 3rd semester and will be teaching one of sociology’s founding founders, Durkheim. He shakes his head at the department decision to cutback on the classroom hours, as General Sociology is one of the study programme’s main subjects, he says.

“The Department is shooting itself in the foot by removing the theoretical foundation from the programme”.

The course, where half of the teaching is now organised by volunteers, introduces the important thinkers and theories of sociology to students.

At the same time the subject develops students’ critical sense, as theorists are pitted against each other, with their thinking applied to current issues to show their continued relevance,” says Steen Lybke Smith.

“It’s crazy that they could have ever thought of doing this,” he says about the missing classroom sessions:”We will end up as crippled sociologists if we don’t have our theoretical background in order.”

Work-related subjects kept up and running

That the cutbacks have not just hit any subject is no coincidence, says the volunteer teacher Steen Lybke Smith. He suspects management of deliberately keeping statistics courses free from any cuts. A poor prioritization, he says:

“They know that it is quantitative methods and statistics which often get us our first job. But this does not mean that these skills alone make us good, critical sociologists. We should educate the best sociologists at this university, not just the ones that find work the easiest,” he says.

According to the Head of Department at Sociology Janus Hansen the cuts to classroom sessions is not their preferred situation. But it is necessary, he says.

“In order to have an economically viable study programme that meets the 12-hour rule and that is research-based, we have had to reduce some activities, including classroom exercises in some subjects. General Sociology is one of the courses where we have evaluated that it is best to do without classroom exercises,” says Janus Hansen.

”Are we actually helping the department? “

The student Daniel Frantzen, who is one of the coordinators behind the volunteer teaching, is proud of the large turnout for today – despite the fact that the seminar takes place as a result of unhappy circumstances.

“This attests to the strong community between students,” he says.

”Are we really helping the department by taking over the teaching that they have cut back?” Daniel Frantzen, upcoming teacher

But at the same time the dilemma rears its head:

“On the one hand, this is a criticism. On the other hand this is a constructive solution to the cuts that we are so opposed to. This makes for a difficult dilemma: Are we actually helping the department by taking over the teaching that they have shut down?” Daniel Frantzen asks, and answers the question himself:

“We have had this discussion in the group. And the solution has been to tell the volunteers that are here today, that this is also intended to be an offer to them. They should get something out of it; learn to teach and refresh themselves on their theory,” he says, before he and the rest of those in attendance get back to their education seminar.