Stasi kept a file on me 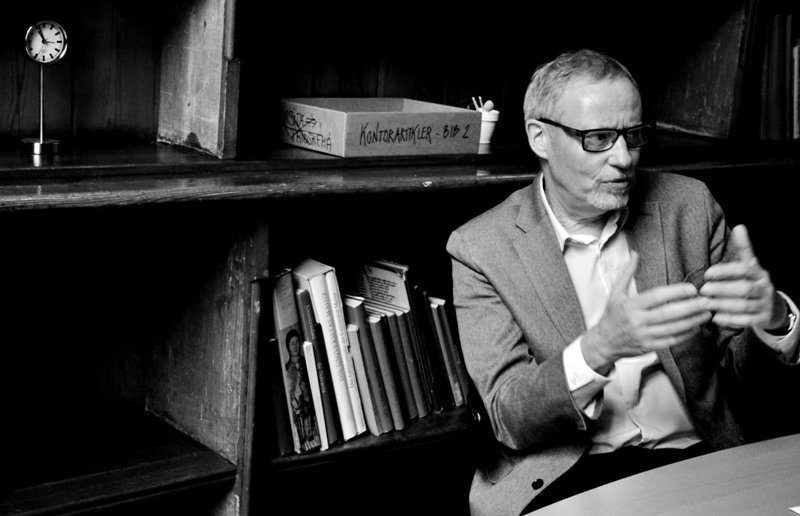 Time to reflect back on the decades past, by the soon-to-move-on head of the International Office, John Edelsgaard Andersen
image: Mariana Bolano

Head of the International Office signs off with an overview of his legacy. And a glimpse into his past

The East German security police STASI had a file with his name on it.

John Edelsgaard Andersen, head of the International Office at the University of Copenhagen, had his dossier retrieved from the archives of the East German secret service buildings in Berlin.

This revelation is one of many that he proffered the University Post on one of his last days of work before taking up his new job as head of the Department of Scandinavian Studies and Linguistics.

John was one of the prime movers of internationalisation, and indeed the whole study abroad movement at the University of Copenhagen in the 1980s, and this entailed travelling, and meetings with Eastern European partner universities in the former East Germany and Poland.

More on this later.

International not just an add-on feature

But back in 1987, the University of Copenhagen was first and foremost a Danish university, with a negligible number of international students, John Edelsgaard recalls.

»At this time foreigners were almost sent away,« he says.

He has since then presided over an office that has boosted international students’ enrollment numbers, and Danish students’ study abroad numbers, to the thousands.

According to John Edelsgaard Andersen however, the biggest change at the University of Copenhagen can not be gauged by just looking at the numbers. There has been a change in outlook.

»Today, there is a common discourse: This university should be international, or even more international. We have a lot of international staff. More than 50 per cent of our Master’s programmes are taught in English. We admit around 3,000 international students. It is all over, so to speak.«

»Internationalisation is no longer an add-on to this university, but a necessary condition. It has, for example, become easier for Danish students to get into an international-oriented classroom in Copenhagen, to travel, and to have an international curriculum. That has changed, an international dimension to a normal ‘KU’ education,« he pauses, before adding: »you, [the University Post, ed.] are a result of a wider parallel-language policy.

Driving license to the world

With many subjects incorporating a study abroad period into their curriculum, some of the previously considered ‘national’ subjects, like law, have in themselves become international.

The lawyers now graduating will find it easier to serve international clients.

»We are producing graduates who are professional with an international touch,« he says, before adding: »We may not be quite there yet, but our graduates should have a driving license to the international job market«.

Internationalisation, in other words, is not just student mobility, it is hiring, it is teaching, and it is »co-operating with research colleagues throughout the world,« he says.

In recent years, the Danish government has seeked to enforce a strict balance in the numbers of incoming and outgoing students for specific foreign universities and subjects. This has forced the University of Copenhagen to reduce the number of incoming students by selectively making it harder for some countries and universities . This entails the risk of undermining the University of Copenhagen’s good relations with its partners abroad.

Another problem is that only a third of international students end up actually working in Denmark, if they take a degree here. Strangely, the problem is worse for two of the largest groups of foreign graduates, from neighbouring Norway and Sweden. A large number of students study at the University of Copenhagen and then move on. This can be either from desire, or from necessity, if no Danish company can offer them a job.

»In a strange way, we cater more to our short term international [f.ex. Erasmus, exchange, ed.] students, than to our full degree students, and of course this is not right,« says John. »We ought to do more for the students immersion, for their integration«.

Hard to get dorm projects going

The University of Copenhagen has been criticized, in particular by full-degree students, for the lack of service in housing. To this, John Edelsgaard Andersen has previously maintained to the University Post that universities could take on more responsibility for housing. But this should be in general, for Danes and non-Danish students, with any extra service to, say, full-degree internationals only to level out any disadvantages that they may have relative to Danish students.

That the International Office and the University doesn’t offer housing, or more comprehensive services to students, has historical reasons, he explains.

»In a way it is part of our European research-intensive university tradition. It is as if we don’t ‘care’ about what you do outside campus. But when I see what Canadian and Australian universities do, I feel embarrassed. We should do more in careers service, we should do more career guidance. We should do more internships, and make sure good student jobs are available. We do provide for example Danish culture classes, but we could do much more in the area of accommodation,« he says.

It is the restrictive Danish legislation, according to John Edelsgaard Andersen, that is stopping the University of Copenhagen from owning its own dormitories, and thereby letting it service international students who find it harder to get housing. A recent amendment to the campus law allows universities to invest in dorms, but only if it is co-funded by the private sector.

And while the University of Copenhagen is a high-flier in attracting private donors for prestigious research projects, it is finding it harder to attract private funding for students’ dorms.

Let’s go back to the 1980s, before the International Office even existed.

At this time, according to John Edelsgaard Andersen, the University of Copenhagen suddenly got a new »international-minded« prorector, he says. At a meeting, one of the Deans took out a school atlas, and we divided the world between them.

»John, you speak German … you do this«, John Edelsgaard recounts the conversation. He got East Germany and Poland, and subsequently travelled there, helping to form partnerships with universities for a period of six or seven years.

So »that is where I got my Stasi file,« he says.

After the fall of the Berlin wall and the communist East German regime, the Stasi archives were officially declassified by the new, post-unification, German government. Everyone had the right to see what was in their file. John Edelsgaard Andersen was curious, of course, and needed to get a look.

»I was amazed! There was a list of all kinds of perversions that people could have had, but I had none. The only thing they had on me was the following: ‘He will not say no to alcohol’!«

So what is this: you must have been on some kind of a booze-up over there?

»Some of the guides, who must have been Stasi agents, have reported this fact, maybe hoping they could have used it,« John laughs, before adding: »I am proud to say none of the perversions applied to me…«

John Edelsgaard Andersen is now moving on to another job.

A professor in the field of languages and Nordic philology, he kept up a side job as an external examiner even when he was heading the International Office. Now he is to head the Department of Scandinavian Studies and Linguistics at the Faculty of Humanities, a set of languages and sciences that has 2,800 students and 120 faculty and staff at the University of Copenhagen.

»In a couple of years perhaps, I would have stopped here anyhow – gone home to smell the roses – maybe concentrated on one of my own interests, like stoneware ceramics. But now the new job energises me,« he says, adding that he has a five year contract.

»I love the University of Copenhagen. I love to do what ever I can to boost the brand, to make the world aware of Copenhagen as a study destination, and I have done this my whole working life. With this new job I give back a few extra years«.