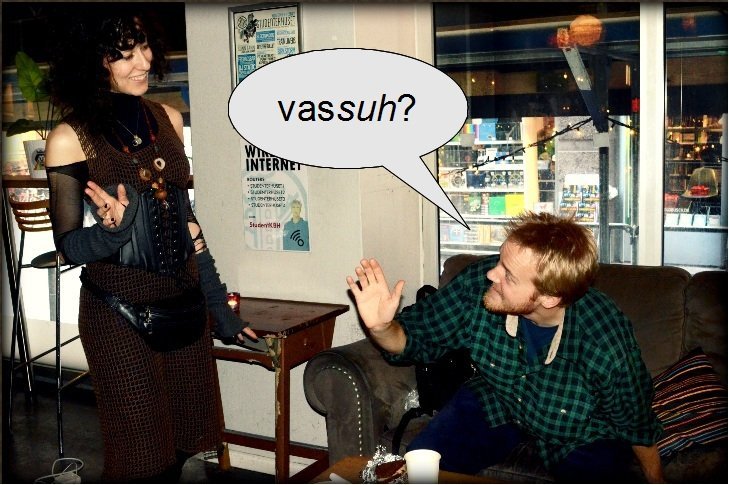 Mysterious words, phrases and expressions in Danish everyday conversation, translated and acted out.

A large part of conversational speech consists of questions like ‘What’s your name?’, and a lot of responses begin by an exclamation such as ‘Oh, me? Well…’ So these two groups of words are quite good to get the hang of.

But what to do when most Danes seem to gobble up the sounds and never let the words come out anything like you’ve ever seen on print?

Here is the University Post pick of 10 strange Danish words, phrases or idiomatic expressions, written out as they actually sound and thoroughly explained, to brace you for some of the frequent moments of bewilderment out there.

‘Hva’ så?’ can be translated as ‘So what?’ or ‘What then?’ But in this situation it is a cheerful way of saying ‘Hey, how are you doing?’ to someone you know. As such it is equivalent to the English ‘What’s up?’ and among younger people the greeting is sometimes varied by ‘Hva’ så der?’ (with a strong emphasis on der), which means more or less the same. However, by adding the pointing adverb ‘there’, it lets you know that your friend is interested in ‘What’s up over there’, that is ‘– with you!’ 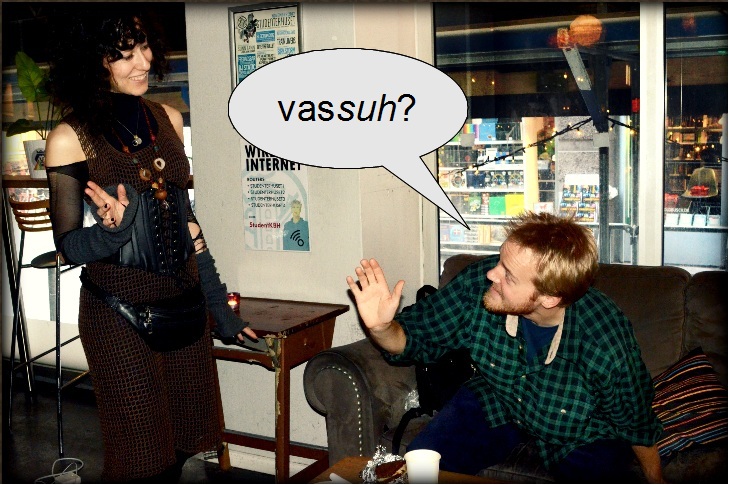 One of the classic mercantile phrases and almost exclusively used in connection with payment by credit card. Literally ‘På beløbet’ means ‘On the amount?’ and serves the purpose of asking whether you want to withdraw cash with your purchase or just have the exact sum charged to your credit card. If you don’t want any cash, you should simply nod and repeat the same expression in an affirmative tone: ‘Pubbeloeb!’ Then you’ll surely pass for a wise old Dane! 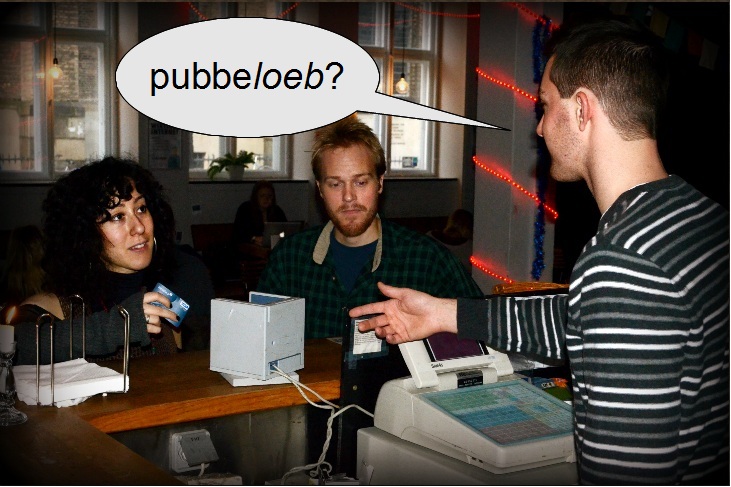 'På beløbet?' Say yes to this when you're in a store, if you DON'T want to withdraw cash with your purchase!

‘Velbekomme’ or ‘You’re welcome!’ is a piece of genuine Danish courtesy often uttered in reply to ‘thank you’. It does, however, have a culinary use, too, and will frequently be heard in Danish lunch rooms, canteens etc. in the sense, ‘Enjoy your meal!’ And if you’re ever being treated to a meal by a Danish host family or the like, you can sometimes hear this along with ‘Versgo-uh-spis!’ (‘Vær så god at spise’) meaning in both cases ‘Please, dig in!’ The expression is, however, slightly versatile, so it can also be used to express disgust, if someone utters anything inappropriate while you eat! 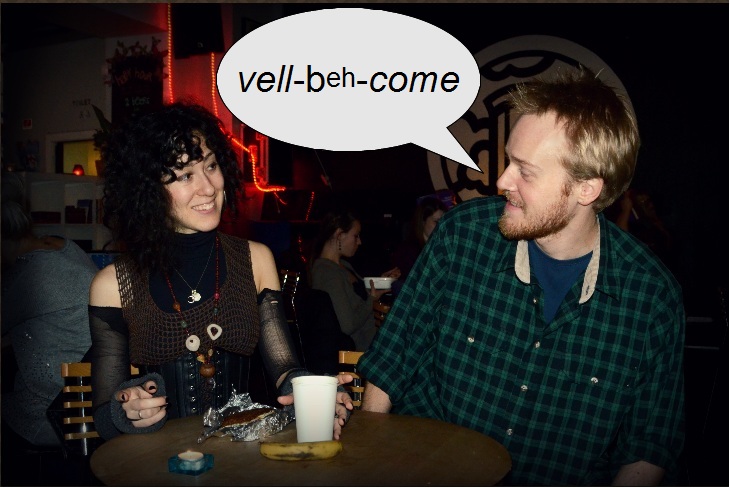 ‘Nåh!’ or the more inquisitive ‘Nåeh…?’ meaning ‘Oh!’ and ‘Oh…?’ respectively are mostly used as temporary replies during dialogue. Since the word may sound a bit like ‘No!’ or ‘Nuh uh!’ in English, it can be difficult for foreign speakers to react casually to this in a day-to-day conversation. So beware when for instance you’re telling your Danish friend about your latest troubles at the university: If her instant reply is just ‘Nåeh…?’, this is not a stand-offish Danish way of saying that she doesn’t believe you – she’s just being attentive. 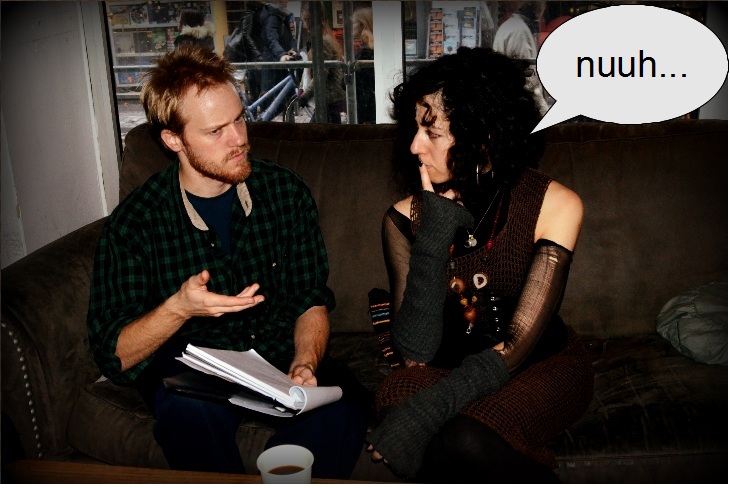 ‘Hvaffornoget?’ or the slightly protracted ‘A’hvaffornoget?’ literally means ‘What kind of thing?’ and can be used as such: ‘What kind of thing is this?’ would be ‘Hva’ er det her for noget?’ But Danes mostly use the expression as a variation on ‘What?’, sometimes to emphasize their bewilderment or surprise. Take, for instance, this scene: A nurse happily tells an unsuspecting man in the ward, ‘Congratulations! You’re a father!’ – ‘A’hvaffornoget?!’ will be his certain reply.

‘Hvaffornoget?’ Take, for instance, this scene: A nurse happily tells an unsuspecting man in the ward, ‘Congratulations! You’re a father!’ – ‘A’hvaffornoget?!’ will be his certain reply. 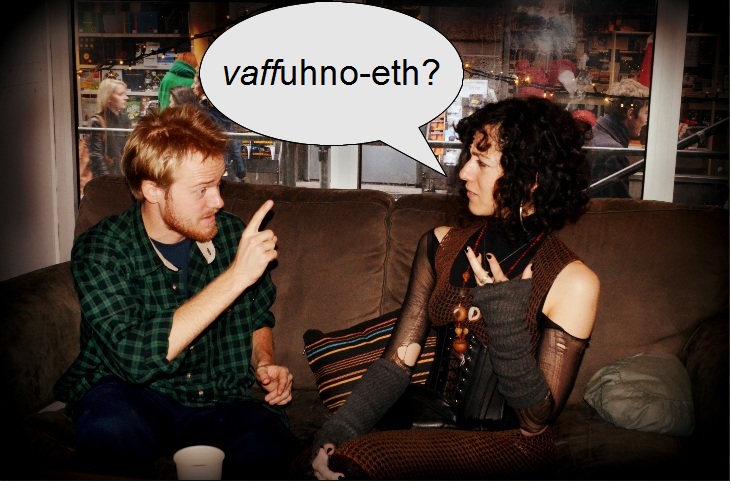 ‘Tak for kaffe!’ (‘Thanks for the coffee!’) isn’t, as you might think, a strong desire to thank someone for your beverage. It’s a more or less clever way of saying ‘Wow!’, ‘I say!’, ‘How about that!’ etc. to express your surprise with an extra bit of flourish. E.g. if someone gives you a little bit too much information about how things developed during her last night on the town, then now would be the time to raise your eyebrows and bring this exclamation into use.

‘Tak for kaffe!’ Don’t confuse it with ‘Thanks for the coffee!’. It expresses surprise with an extra bit of flourish. 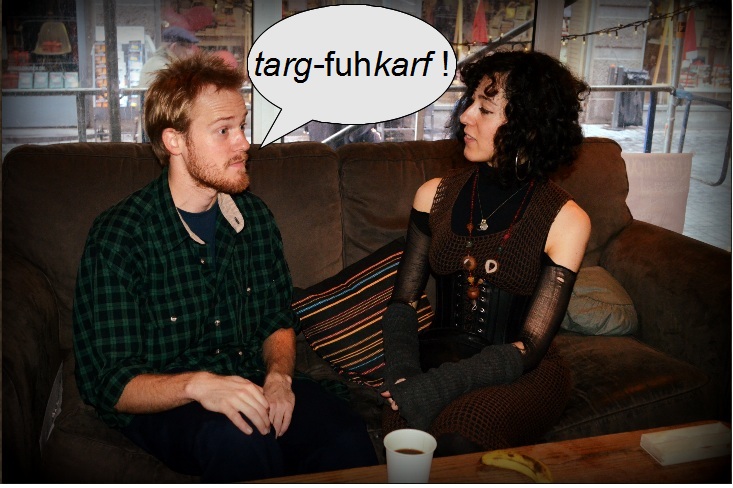 ‘Jooo…’ or ‘Joeh…’ your conversation partner will go, when you’ve given him something to think about. ‘Jo’ and ‘Ja’ both essentially mean ‘Yes’; one is used in reply to negative questions (‘Aren’t you a student?’, ‘Jo!’), the other to positive questions (‘Are you hungry?’, ‘Ja!’). But especially when the word is being drawn out (‘Joooeh….’, ‘Jaaaa…’), you can tell that your Danish friend is thinking, puzzled or sceptical perhaps by something you’ve said or asked him. The best English translation, therefore, in this context would be ‘Yes, well…’, ‘Yes, perhaps…(but)…’ – or any sort of expression your friends would normally use, when you can tell they’re headed from delightful omniscience to complete bewilderment.

‘Joeh…’ If you hear this from a Dane, it means you’ve got them thinking, or perhaps puzzled – or sceptical! 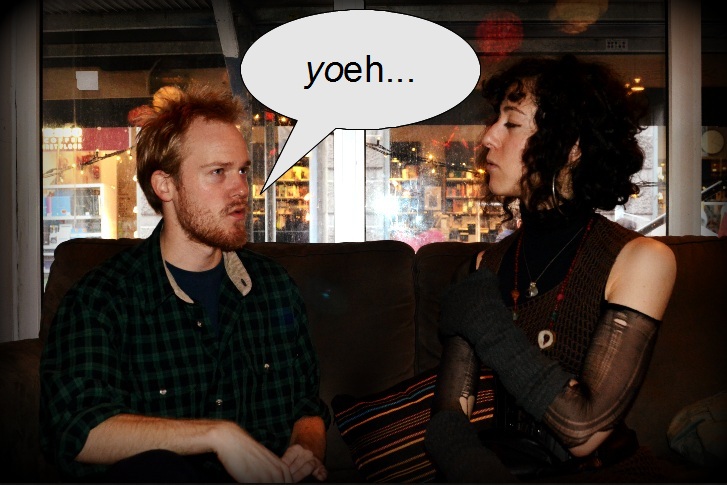 ‘Puha!’ is an exclamation used for a lot of things: Either to tell you that ‘It’s hot today!’ (then typically varied by ‘Pyh’, ‘Pyha’), that something is troublesome, annoying, worrying or even smelly. Or it might be that your fellow speaker has found something you said hard to understand, acknowledge or admit. Depending on the situation, it can be translated as ‘Phew!’, ‘Ugh!’, ‘Ew!’ or ‘Pooh!’. Lastly it can also mean that your friend is glad he just barely passed that last written exam: ‘Puha!’, he’ll go, that is: ‘Whew! (that was a close one!)’

‘Puha!’ Multifunctional word: whether it’s raining cats and dogs, something is troublesome, annoying, worrying or even smelly, or if you are glad you just barely passed that last written exam. It works either way. 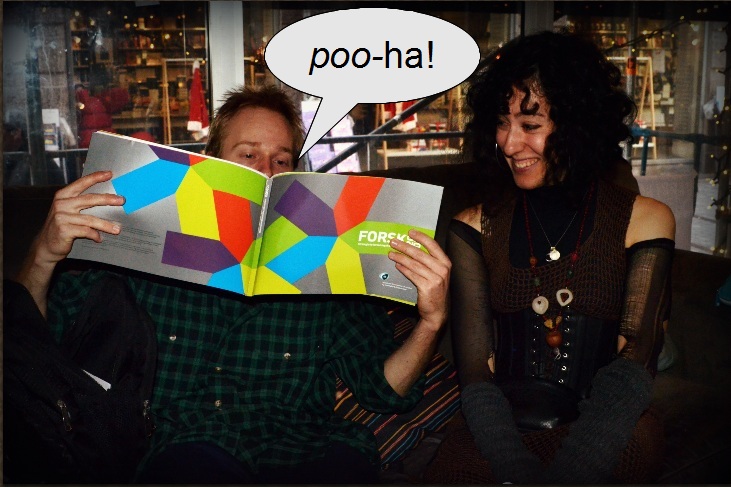 ‘Pøj pøj!’ is a colloquial way of saying ‘good luck’, for instance during exams, when you’re about to write a difficult paper etc. It resembles ‘Break a leg!’ in English in that apparently it doesn’t evoke a very appealing situation. The expression reproduces the sound of spitting (‘Ptooey!’) and recalls an old-time ritual of wishing good luck with a brief bit of spittle on the ground, when someone had just left to undertake a long journey, for instance – or to go to their final exams. As in the case of the English version, the expression was probably supposed to avert a bad situation, before it possibly happened, and the practice can be compared to the still used crossing of one’s fingers to prevent something from holding true. So when wishing ‘Best of luck!’ remember to say the initial word two times, for one ‘Pøj’ still just means ‘Yuck!’ 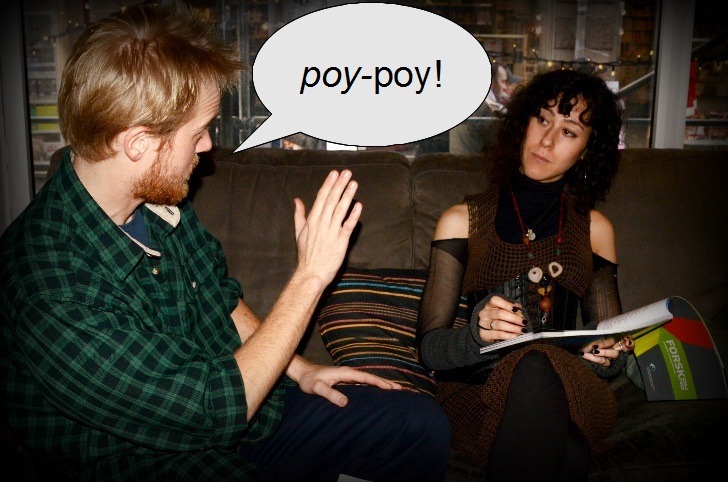 ‘Det var hyggeligt!’ involves the very versatile Danish word, ‘Hyggelig’, which is hard to translate, but means something like ‘Cosy’. However, ‘This was cosy!’, as the phrase literally means, is very often used as a polite way of saying ‘Thanks for a good time!’ or simply ‘Goodbye!’ Its original sense, however, can also be used ironically. So don’t be surprised if you meet a friend and ask her how her long and troublesome job interview went, and she makes her dissatisfaction known by saying, ‘Det var rigtig hyggeligt!’ – ‘It was really cosy!’ Then she probably didn’t get the job, after all!

‘Det var hyggeligt!’ A polite way of saying ‘Thanks for a good time!’ or simply ‘Goodbye!’, unless you say it in a sarcastic manner, of course. In which case it means the opposite.’ 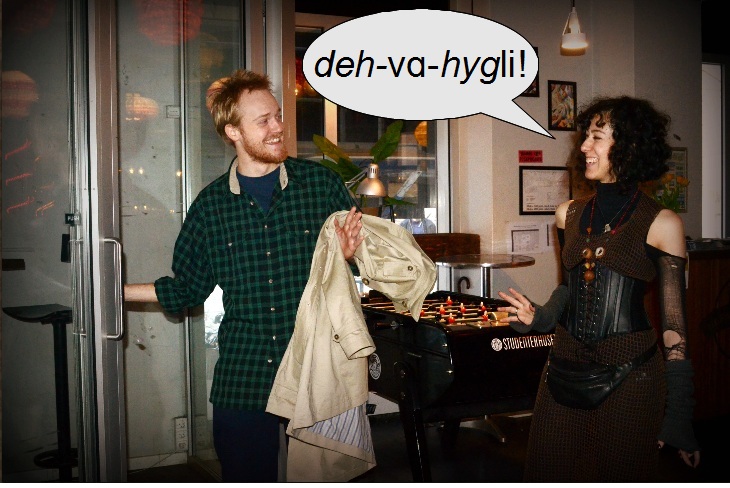 That was it! Any ideas for more strange Danish idiomatic expressions? Let us know in the comment field (including your pronunciation guide!)