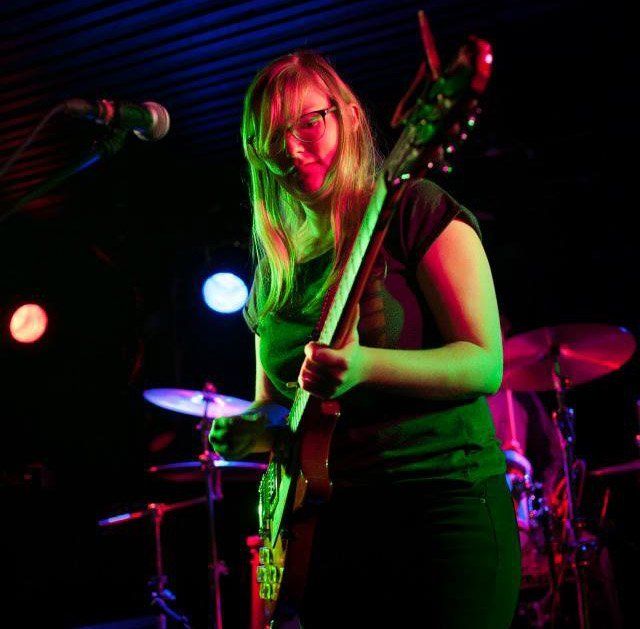 Student, UCPH employee, and rockstar - Lone has her big break on Danish radio with her band Dawn Gazers

Lone Kjeldgaard Pedersen lives a double life; during the day she is a student at ITU and works at UCPH, but at night she is playing concerts and recording an EP.

Lone Kjeldgaard Pedersen is both a UCPH employee and member of the student band Dawn Gazers, together with Italian student Giulio Zichella and Danish student Benjamin Karph. Their hit song, How Am I, was just debuted on the popular DR radio station, P6 Beat. Lone is both the co-lead singer and basitarist (an instrument combined of a bass and a guitar).

”We recorded three songs last summer and put them on Soundcloud. We then sent our songs to KarriereKanonen, a music talent program on Danish radio station DR, and it was through there that P6 Beat found our songs,” says Lone. ”I got an email at 16 that we were being played in the radio at 18.”

”It’s strange to hear yourself on the radio. I found it hard to grasp that it was my voice that I heard, and the stuff that we have been working on was being evaluated by other people, live.”

Although the work and studies currently fits into Lone schedule, she would give it all up if the band made it big.

”It takes a lot of time to play in a band,” says Lone. ”You want to spend as much time as possible playing, because it is fun. Luckily enough University of Copenhagen is flexible with my working hours, so I can work the days that fit.”

”Our music is my passion. So if we got the break, I would give up everything to make this my career. Even though it is hard work, because you do not only play in a band, you are also a sound manager and responsible for PR.”

First an app, then an album

Where other bands focus on recording an album, Dawn Gazers are taking another direction, creating an app to combine bandmate Guilio’s novel with their songs.

”Right now our project is to create an app. Giulio, the guitarist, has written a novel, and we want to create an app where you can read the novel while listing to our music. One of our songs will fit each of the chapters in the novel. It is new way to distribute music. We are currently looking for funding for this project.”

”Our genre of music is inspired by alternative rock and the 90s. It is very DIY, so we are not that interested in a record deal since we want to keep our creative freedom. We want to be an innovative band that creates new ways for music to be distributed. We want to inspire others to see that there is another way to get your music out. Long-term we want to record an album, but our focus right now is the app.”

Check out their hit song, How Am I, on DR radio here and catch Dawn Gazers at their concert at Råhuset 28 February, and at PH Cafeen on 15 March.