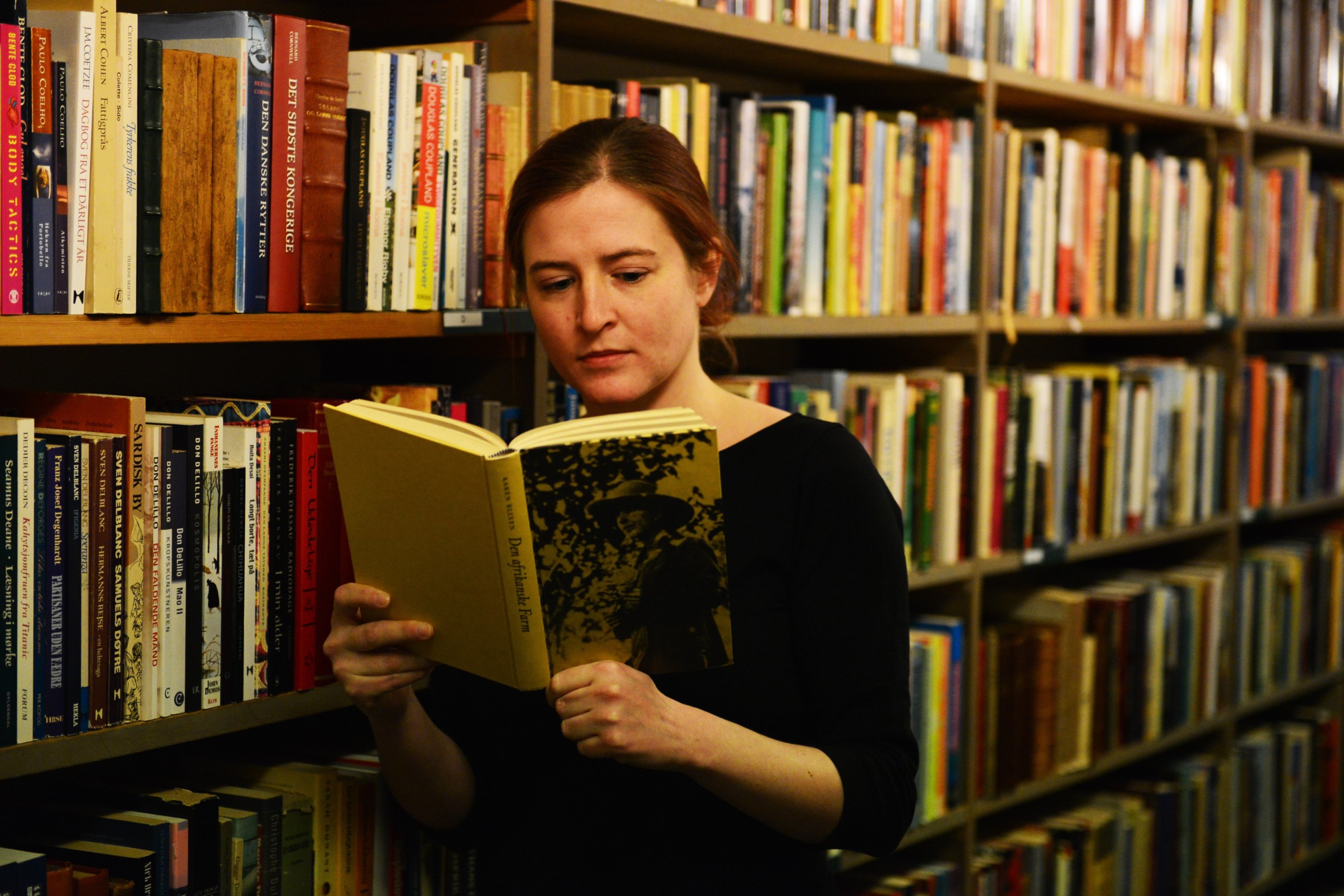 How many Danish literary works have YOU actually read? Don’t be shy. You won’t be alone, even if you are Danish, if you admit that you have not read any of them, either in Danish or in translation.

After all, as an outsider, it is hard to make the initial investment in reading Danish literature if you know that only a handful of them reach the status of iconic world classics. If you are Danish, of course, you will have been acquainted with several Danish classic works in school.

But say you’d like to start reading Danish literature. Where should you start? The list of must-reads is long, and it’s hard to find consensus on which books should be on the list in the first place.

The University Post deliberately avoided the professors and recognized experts and asked three students of Danish and Literature to give their recommendations on where to begin.

Christian Kronow, a Danish student, recommends new readers start with the most internationally renowned Danish poet and author. Andersen’s fairy tales have been translated and adapted enumerable times around the globe, and his birthday is celebrated as the International Children’s Book Day on the 2 April. According to our calculations which have been backed up by several scientists, it is, at least in terms of readership, bigger than the Bible.

Andersen’s fairy tale, “the Shadow”, was first published in 1847, and displays a gloomier side to Andersen, according to our expert Christian Kronow.

“You should read it, because it shows another side of H.C. Andersen, than what we are used to. Some think it is a somewhat auto-biographical piece, which tells us about his personality,” he says.

“Out of Africa” (see the book on the picture above) was originally published in 1937 as a memoir by Isak Dinesen, which was the pen name of Blixen. It traces Blixen’s 17 years in Kenya when the country was under British colonial rule.

“Out of Africa is an example of life as a colonial lady in Africa, and is a tale that reinvents itself time after time. Even contemporary books cannot beat Blixen’s novel, because she knows what her readers want. She is a storyteller”, says Laila Dalgaard, who is studying literary history.

Dan Turèll is Denmark’s contribution to the beat literary movement. He wrote about jazz, drugs and the city life. The Murder Series is a group of hard-boiled detective novels, set in an alternative crime-ridden version of 1980’s Copenhagen.

“It is a great depiction, and you’ll find some good places to go on a drinking binge. Nobody can paint a Danish Dashiell Hammett character like he can”, says Christian Kronow. “The series is not chronological, so you can begin whereever you like.”

Himself a former student at the University of Copenhagen, the poet Tom Kristensen was a ‘painter’ of city life in Copenhagen, and very much inspired by writers as Joyce and Baudelaire. ‘Havoc’ is a depiction of the life of the artist and writer in 1930’s Copenhagen. The story follows the literary critic Ole Jastrau drinking himself to death.

“It is a modern downfall story about a man on a booze bender. He goes from being everything to being absolutely nothing. It tells us about the self-destructive side of the modern human,” says Laila.

The late Jakob Ejersbo had his breakthrough moment in 2002 with his first novel NordKraft. He then began writing his Africa Trilogy, of which ‘Exile’ is the first book. It is about life in Tanzania and is inspired by his own childhood. Ejersbo died in 2008, but his manuscript was edited postmortem and published the following year.

Exile is a coming of age novel which follows an English teenager growing up in Tanzania as she discovers alcohol, drugs, sex and violence in Africa, and was chosen for our list by Marie Lybeck, who is studying for her Master of Arts in Danish.

“Ejersbo is an amazing writer, and the book should be read simply for his language. It is a wonderful depiction of a modern Danish society, which is placed in Africa, but it could just as well have been in Denmark”, says Marie.

Hans Christian Scherfig was not only known for his writing, but also for his paintings and his political activities in the Communist Party. The Stolen Spring describes the Danish school system of the beginning of the 20th century. A group of students are terrorized by the harsh teacher C. Blomme, who is killed in the opening of the novel, but by whom?

“It is a novel what depicts the Danish school system, and especially the transition from the “black school” of physical punishment to the modern school system of mutual respect between teachers and students. For Laila, “It is a great picture of Denmark”.

Nobel Prize winner Pontoppidan wrote this eight-volume novel tracing the life of protagonist Peter Sidenius. Son to a vicar, Peter rebels and moves to Copenhagen to study engineering where he reinvents hismelf as “Per”. His plan is to make a channel system between the lakes and rivers in Jutland. By raising funds for his project he becomes acquainted with a rich Jewish family, and later engaged to one of the daughters, Jacobe. The story twists and turns unexpectedly.

For Marie, the novel is “an amazing portrait, and a fine representation of the Modern Breakthrough in Danish literature”.

Jussi Adler Olsen is the Danish rival to Stieg Larsson. Taken literally from Danish, the title translates to “The woman in the cage”, but has been renamed variously for American and British translations. A psychological crime thriller, the book follows police detective Carl Morck who is condemned to Department Q to solve old cases after a gun mishap. Together with his assistant, Morck begins investigating the disappearance of a Danish politician on a ferry.

This is the first novel in the award winning Department Q-series. “It is a Danish mainstream thriller, and it’s better than most others in the genre. Also, Jussi Adler Olsen writes really well, and he has a refreshing take on the classic detective-noir”, says Christian.

Philosopher, literary critic and short-story writer Villy Sørensen published his first collection of short stories in 1953. Strange Stories is a Kafkaesque exploration of the absurd and surreal. There is a detective story without a case to solve, a story about tigers moving into peoples homes, and much more.

The subjects of Sorensen’s stories are serious but laced with humour and irony. “Amazing stories!” says Marie. “There are no limits to what can happen in Sorensen’s fantastic and, at times, crazy universe.”

Peter Høeg was born and raised in Copenhagen, and in ’84 he obtained a Master of Arts in Comparative Literature from the University of Copenhagen. In the ’90s, he had his international breakthrough with his novel about snow and ice.

“It is a great thriller, and it also gives a fascinating portrait of a very special woman.” says Marie. The novel begins in a Copenhagen ghetto and goes to ice cold Greenland. It follows the half-Danish, half-Inuit narrator Smilla, who investigates the death of an Inuit boy.

Ibsen was born in Norway in 1828. He was a playwright and poet. He is generally considered as a Danish writer in Denmark, while the Norwegians argue he is Norwegian. What is indisputable is that he was one of the must influential playwrights of his time. A Doll’s House premiered in Copenhagen in 1879. It is a three act play which follows Nora. the wife of Torvald, and a mother to three children. She is the ideal 19th century wife, who gracefully takes care of the home, but ultimately craves her independence.

“The Norwegians rightfully think it is a Norwegian play, but it has inevitably become a part of Danish cultural heritage. And it is a must to understand the Nordic vision on the human.” says Laila.

Christensen grew up in a working class home in the town of Vejle. She was a Danish writer best known for her poems and modern novels, based on writing in systems and structures. For example, there is one poem in the collection Alphabet where all nouns in the first poem begins with the letter “a”, and in the second “b”, and so on. Furthermore, are the number of stanzas decided by the Fibonacci-sequence (…1+1 = 2; 1+2=3; 2+3 = 5…), so the first poem is a one stanza poem, the fourth has five stanzas, and so it continues.

For Laila, Christensen’s work is “beautiful and embracing poetry about everything that exists.”

He was born Martin Andersen in a poor neighborhood in Christianhavn, but his family moved to the island of Bornholm, where he was raised in Nexø. A name he would later adopt as an artist name. Pelle the Conqueror is a four part novel that follows Pelle climbing the social ladder: Part I, “Boyhood”, tells of the conditions in the life of farmhands and servants in the country; part II, “Apprenticeship”, depicts the proletarian life in the town; part III, “The Great Struggle”, describes the working class struggle with capitalism in the city, and part IV, “Daybreak”, shows the resolution of Pelle’s struggles.

“Pelle the Conqueror depicts a working class boy’s childhood and fight with authority,” according to Laila,”like many others in the beginning of the 20th century. Pelle suffers from injustice, and it is difficult for the reader not to empathize with him, and through that understand the working class fight for rights in the modern labour market.”

And now the newsroom’s choice. We first nipped in to the Danish-language site Uniavisen.dk’s newsroom next door for some inspiration, and we at the University Post agree completely with their nomination. On the face of it, we were actually shocked that our three experts missed it in their pick of their 13 best Danish works.

The Fall of the King is an excellent book about King Christian II , who reigned between 1513 and 1523, and who is said to be have the “founder of Denmark’s lack of greatness,” as the author Johannes V. Jensen writes.

Or indeed, the “most true book that has ever been written on the Danish mind,” as another author Tom Kristensen (see above) said who was Johannes V. Jensen’s contemporary.

Wanna know why “Danes do it mellow”? Read ‘Kongens Fald’ or The Fall of the King. It gave Johannes V. Jensen the Nobel Prize for literature

Do you have a favourite Danish literary work? Help us and help your fellow reader by making your suggestion below in the comment field!