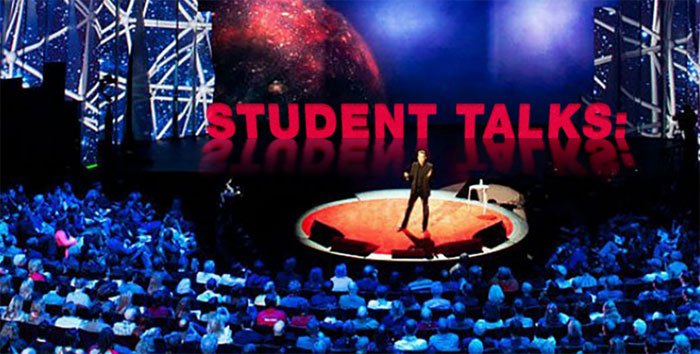 Inspired by the global idea-sharing platform TedTalks, a group of students has now created their own student-oriented forum to inspire others. The Student Talks team plans to have a few events take place each semester, and the first of these events will be held at CBS on 28 April.

Student speakers are carefully chosen based on the content of their speech and their public speaking ability. At each event, 4-5 chosen student speakers will have 10-20 minutes each to speak on a selected topic. The location of the events will change each time but will always take place at one of the institutions of higher education around Denmark.

”It’s a platform for student speakers to share different thoughts and experiences from life. The whole point is to learn,” according to Mads Werner, one of the four co-founders of Student Talks and an engineering student at CBS and DTU. ”It’s by students and for students,” adds Oliver Thomsen, a co-founder of Student Talks and another engineering student at CBS and DTU.

Wants UCPH students to get involved

Because the institution hosting Student Talks will change each time, the topic areas will also differ based on the interests of the students. ”At different schools, students will be interested in different areas and have different fields of interest,” says Werner.

For the upcoming Student Talks later this month, four speakers have been announced. Their talks will focus on ‘successful seduction’, a skill that can make a person seem more interesting or appealing, ‘Sharing Economy’, the concept upon which companies like Airbnb and Uber are built, how fear and momentary laziness drive actions in our daily lives, and what makes an entrepreneurial talent.

Future locations for Student Talks include the Technical University of Denmark (DTU), The Royal Danish Academy of Fine Arts Schools of Architecture, and the Copenhagen Business Academy, but the team hopes that University of Copenhagen (UCPH) students will also want to get involved and bring the event to UCPH in the future. ”If anyone wants to bring this to UCPH, they can come to the event in a few weeks and speak to us,” explains Werner. Alternatively, the Student Talks website is an avenue to reach out and get involved.

The students who created Student Talks don’t want the concept to be limited to Copenhagen or even Denmark. ”We want to start here and have it spread everywhere in order to inspire as many people as possible,” says Thomsen.

Following each event, a cloud document will be uploaded so the audience can share their thoughts on the topic. In this way, the dialogue can continue after each event. ”The audience will be able to post what they learned and how they got inspired so that everyone can read about it,” says Thomsen. According to Werner, ”The idea is to enable some kind of platform to get different perspectives on the talks.”

The events are free but require that attendees register. Students can read about the upcoming talks, register to attend the event, as well as apply to become a speaker on the Student Talks website.