Students in Bucharest for physics competition 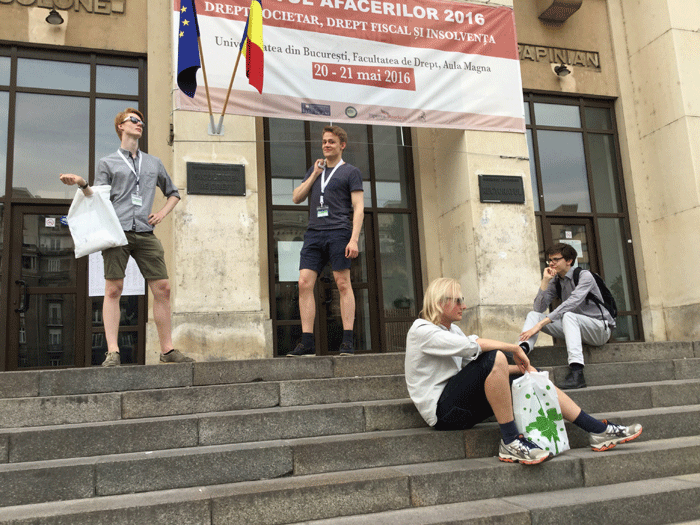 Danish team in Bucharest, Romania at the Physics League Across Numerous Countries for Kick-Ass Students (PLANCKS). They sent the University Post their report

We arrive at the airport at midday, having been on our way since three in the morning.

We need to get bus tickets for the inner city, something we chose to do at the airport. The clerk at the shop where we buy the tickets barely understands any English, and when we get some tickets a man pulls us aside and tells us that we’ve bought the wrong ones and decides to help us get the right ones.

“You need to be patient,” the man tells us, “sometimes these people make you want to do things that will put you in jail,” he smiles as he as he moves his thumb from the left to the right side of his throat.

Needless to say, he only spends a few seconds speaking with the clerk before they are in a heated argument.

So what brings us to Bucharest?

We (Bastian Bakkensen, Svend Krøjer Møller, Jørgen Sandøe Musaeus, Asbjørn Bækgaard Lauritsen) are participants in PLANCKS (Physics League Across Numerous Countries for Kick-ass Students), an international competition for physics students. It is funded and organized by the local association of physics students in Bucharest and IAPS (International Association of Physics Students), an umbrella organization that the University of Copenhagen (Fysisk Fagråd) has recently joined.

People compete in groups of three to four, in solving ten theoretical problems in all branches of physics over a period of four hours. Other than that, there is also a number of symposia, primarily featuring Romanian professors as speakers (as it turns out, Romanian physics seems to be all about lasers), but a professor emeritus from the University of Lund, Sweden also attends (also talking about lasers).

The process to qualify for PLANCKS is really quite simple, two teams per country are able to attend the competition, and the individual countries decide for themselves which hopeful teams get to join. For the first time in the competition’s history (which is admittedly only three years), more than two Danish teams wished to be a part of the competition, so a preliminary round was held in which we managed to qualify against some tough competition.

So how did we fare at PLANCKS? Well we didn’t win the competition.

To be honest, we didn’t even end up in the better half of the participants, and sadly we didn’t beat any of the German teams, which our institute director, possibly jokingly, was rather hooked on us doing.

We did however get a good score in a few of the assignments, meet a bunch of interesting people from a lot of different countries, and had the good fortune of experiencing Bucharest. It would probably not have been a travel destination of ours, if PLANCKS hadn’t taken us there.

Bucharest turned out to be a great experience where every building we entered had at least five meters from floor to ceiling and they always put french fries in their “shaorma”.

By the end, our bus passes had been well spent, and we are now a bit more patient.