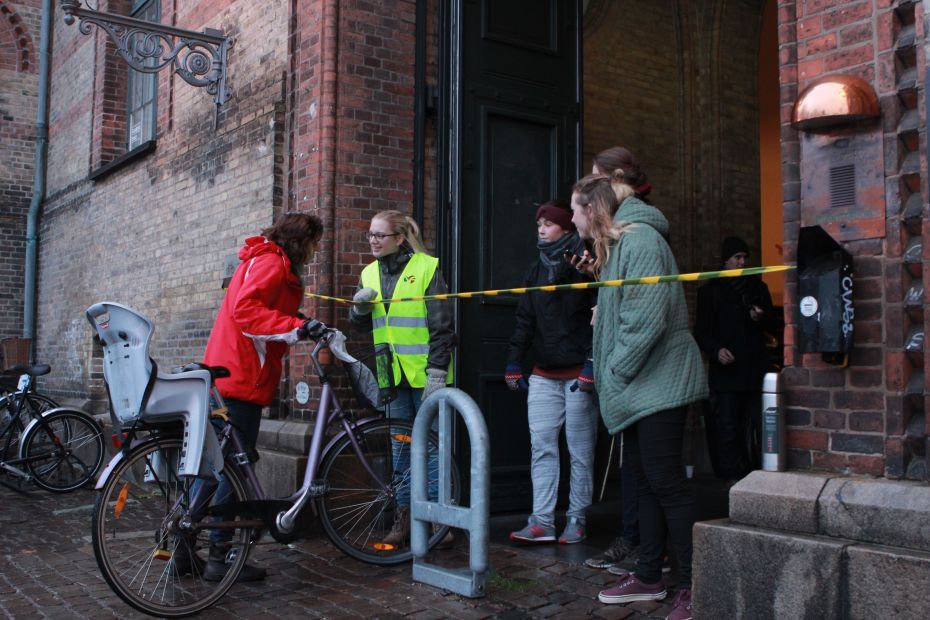 It's not the first time students at the University of Copenhagen have used the blockade as a form of protest. Here students from the Faculty of Social Sciences bar an employee from entering the CSS campus gate in protest against the university's handling of the government’s Study Progress Reform in November 2013.
image: Rasmus Preston

Humanities student council considering blocking access to the Dean's Office at the Faculty of Humanities to signal the importance of libraries which face DKK 3 million cuts.

The Faculty of Humanities is to cut DKK 60 million from its budget with department libraries lined up for cuts. DKK 3 million is to be cut from the libraries’ budget, and a library committee is negotiating right now and until January on how exactly they will do it.

According to the humanities’ student council HUMrådet, rumours are circulating that department libraries are to be abolished or merged, and that the departments’ in-house librarians are to be fired to find the money. This proposal is a disaster according to the student humanities council.

“Good department libraries are a prerequisite for a good university with good teaching and good research. And librarians who know about the teaching and research at the department are important to ensure that the right books are purchased,” it states in the humanities student council invitation to a public meeting 10 November. Here the austerity plans were to be discussed and students to vote on whether they will block access to the office of the Dean in protest.

Associate Dean: The UCPH Board decision, not the Dean’s

Julie Sommerlund is the associate dean responsible for the faculty’s external relations. She reckons that the students’ humanities council is barking up the wrong tree.

“It is good that you are getting involved with this issue. There are just a few things that you should be aware of before you meet up. The Dean’s Office does not have a plan for this. Management has decided to be cut DKK 3 million from the whole library area. This is because the entire faculty has to save money – as you know – due to the cuts,” Sommerlund writes in a comment on the HUMrådet humanities council facebook page.

Julie Sommerlund is chairman of the library committee that is to find where to save the three million kroner. A committee which also includes a representative from the students’ humanities council.

She says that no finished solution has yet been found, but that this commiteee has been set up to find one.

Humanities council does not know where the rumours started

The Humanities Council understands, according to its chairman Jonathan Morell, that the larger general cutbacks have resulted in economic limitations. And the council is prepared to work constructively within these limitations.

“But what we respond to is that we have noticed many rumours about the department libraries. We want to give those students who are not involved in, say, study programme boards, the opportunity to make their views known,” says Jonathan Morell.

Where do the proposals come from that you are protesting against? The committee has only just begun its work and has no finalized proposal?

“It is true that the committee has only held one meeting so far. But it is an idea that exists and something that has been discussed. But I do not know where the idea actually comes from,” says Jonathan Morell. He adds:

“What I want to comment on is that this, our public meeting, is a strong statement. We’d rather have them stop this idea, right now, even if it is a non-specific proposal. It is very important for us that it does not end up like what happened to Department of English, Germanic and Romance Studies ENGEROM, where the library was closed down. The open public meeting is a venue where we will talk about what we do and where we need to find the DKK 3 million.”

The chairman said that the Humanities Council still intended to vote on blockading the dean’s office, even if the cuts proposal do not originate from there.

“It’s an opportunity for us to signal what the library means to us. Originally there were no plans for students to be on any committees except exam committees, which is an areas that affects students alot. But we students are really concerned about the library. It has a large influence on our everyday lives. ”

The humanities public meeting was scheduled for 10 November.