Students trying to change the culture of law 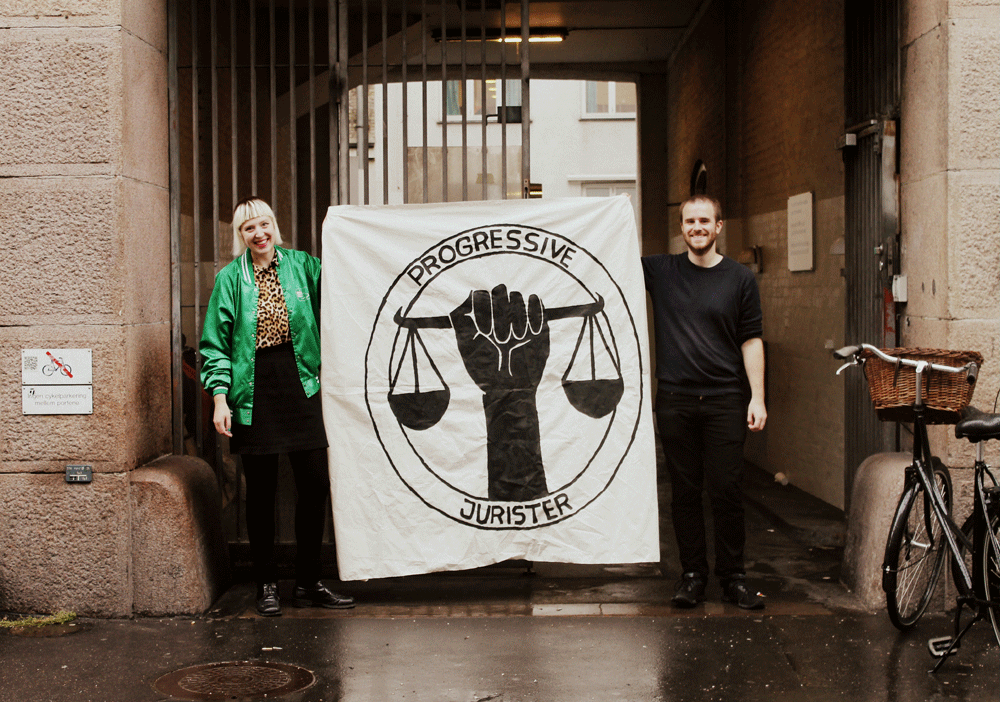 The Progressive Law Students Association (PLA) believes that there is more to studying law than trying to secure a prestigious job, making money or wearing designer suits. They want to use law to make a difference.

Student organization aims to get more law students to focus on idealism, equality and human rights rather than being preoccupied with money, status and prestige.

The Progressive Law Students Association (PLA), known as Progressive Jurister in Danish, was founded in 2014 when a group of students discovered that they shared similar interests, including a desire to use law to make a difference.

The reaction from other students has been positive. “We feel like there is a need for it at the faculty of law. People have had the experience of sitting in class and thinking that no one is interested in human rights or helping others, but when you talk to other students, you discover that they decided to study law because they want to make a difference,” says Anah Maskell who is one of the founders of the organization.

Poking fun at the homeless

In 2014 law students at the University of Copenhagen came under scrutiny after the student organization known as the Law Student’s Discussion Club (Juridisk Diskussionsklub or JD) made a poster for a theme party that poked fun at the homeless.

“Are you a creditor or a debtor” the poster asked while showing a picture of the famous character Harvey Spector, from the hit legal TV show Suits. As well as a picture of a homeless man sitting on the street with a beer can.

“The poster from JD was an such a toxic expression of an elitist culture,” says PLA member Mads Markvard Holscher.

According to the PLA, the underlying reason for that kind of thinking is not necessarily because of the law students, but a result of a dominant culture at the Faculty of Law that promotes a certain way of thinking.

There is a stereotype about law students that they walk around in designer clothes, high heels and suits and mainly care about money and prestige? Are the stereo types justified?

“I think that is a stereotype among law students as well, which makes it partly true, because it is an ingrained part of the environment at the Faculty of Law,” says Anah.

“At law, there is no such thing as a nerd. There is just a very popular person that gets very good grades”

However, according to the PLA, the best way to deal with those stereotypes is to challenge them. “Most students care about others things than money and status. A lot of people want to make a difference, but maybe they feel off, because they feel like they don’t live up to the stereotype of what a law student is supposed be like,” says Anah.

What creates this dominant culture that is focused on money and prestige?

“The representatives of the labor market that students get to meet are dominated by the big law firms,” says Anah.

“These prestigious law firms and ministries seem to promote a certain culture and a certain image of what a law student or a future lawyer is supposed to be like,” says Mads

No such thing as a nerd

The competition between students to get good grades and secure a job at a prestigious a law firm is well known.

Why do the students get the impression that all that matters is what grades you get?

“Because that is what we are constantly told. I just started a year ago and they told us there is a lot of talk going around about needing to have good grades to get a job. They told us that it is not entirely true, but that it is mostly true”, says Mads

“I think it is very noticeable that in other studies and fields you can be a nerd and get really good grades or you can be good in another way. Like there are different spheres or levels, while in law they are very interlinked. At law, there is no such thing as a nerd. There is just a very popular person that gets very good grades,” says Anah

The pamphlet says in Danish: Did you decide to study law to make a difference? Do you think critically about legal issues? Are you more interested in discussing why laws are the way they are than how you can use them to make money?

The Faculty of Law has recently started to manage the issue of grades differently, according to Anah. “They have made an effort to decrease competition between students and increase cooperation. They do think that the competition for higher grades amongst students is a problem,” she says.

You do not need good grades!

Despite the popular notion amongst law students that grades are crucial for their future prospects, the reality may be different, according to the PLA.

“Students are surprised when we tell them that they can get a good job despite not having good grades. There are many places where people do not care about your grades, but about how interested you are in the topic. This is a shock to most students,” explains Anah.

“I think the competition for grades is a symptom of how our whole education is set up to cater to certain law firms and the idea that being successful means making a lot of money and I think we have to challenge that”, she says.

According to the PLA there are a lot of different job opportunities both in the private and public sector. “We are trying to show that by visiting the places we feel we can make an impact. We have visited the Danish Refugee Council, Institute for Human Rights and Foldschack, the Christiania lawyer. We try to focus on the jobs we would like to get and it is not necessarily in the big commercial law firms,” says Mads.

Recently a couple of new student organizations have popped up that focus on similar issues. However, according the PLA what makes them unique is that they also have a clear political aim.

“Organizations like Foreningen Argument and the Students Association for Human Rights do a great job of challenging the status quo, but they are not as political as we are. We have a political aim as well. We are part of a movement that is feminist and wants to abolish capitalism defeat discrimination and work for a better society,” explains Mads.

What does your organization do to create change?

“We work on two overall fronts. We have discussions where people can come and learn and discuss political subjects. We also use the group as a way to meet other like-minded law students. We meet up just to talk and have lunch. Sometimes we might decide to go to a protest together”, says Mads.

The topics discussed vary quite a bit. “We recently had someone come in a talk about a legal case about affected mine workers in South Africa, and soon we will have someone come in and talk about the financial crisis from a legal point of view,” says Anah.

Progressive law students also have a message for anyone interested in starting their own student organization. “If someone at another faculty wants to start up a similar organization, we would love to share our experience,” says Anah.