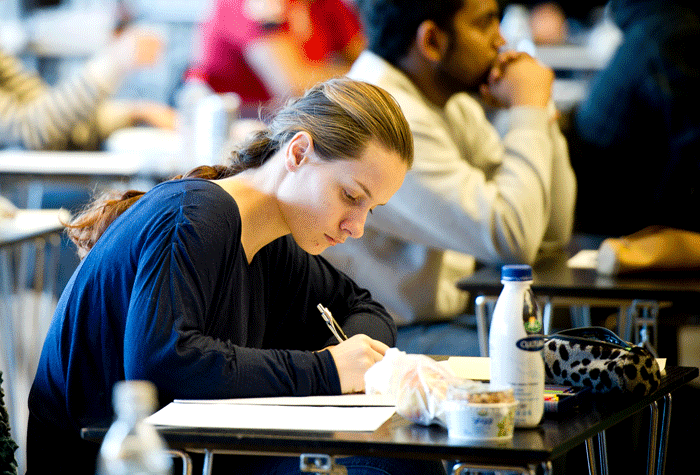 From an exam at the University of Copenhagen. Adjustments of study progress reform to make it all more bearable
image: Lars Juul Hauschildt

Students and management satisfied with new accord on study progress, the hated 'fremdriftsreform'

Students now only have to take 45 ECTS points annually, and will not be forced to sign up for courses. University of Copenhagen (UPCH) management and the Student Council have just agreed on the new, so-called ‘fremdriftsreform’ rules to be applied from the autumn semester of 2016. While study completion times at UCPH must be reduced by 7.6 months – a requirement from the Danish government – students will enjoy less regulation of their study activity from the autumn semester.

The study progress reform or ‘fremdriftsreform’ was designed to address the issue of Danish university students taking longer to finish their studies than their European counterparts. The University of Copenhagen has an average graudation time of 6.6 years, the highest in Denmark – according to statistics from the Ministry of Science, Innovation and Higher Education. But the controversial reform has since been criticised for its rigidity.

“We’re pleased to have been part of loosening the study progress reform’s tight grip on us students. It’s been tough, but we’re content to be signatories to an agreement that will truly make a difference in students’ daily lives: Now it will be possible to take more chances academically, we will not get caught up in rules about e.g. forced registration as easily as before and it will be possible to gain new knowledge outside of the curricula,” writes Chairman of the UCPH Student Council Malou Astrup Clemmensen on the internal UCPH intranet KUnet.dk release.

“The agreement also includes a number of things that can help improve our study programmes. Now we must focus on how we can create study programmes in which we engage out of interest rather than out of fear of being thrown out, and where we are challenged every single day,” she says.

With the latest Danish parliament’s adjustment of the study progress reform, UCPH has been given more flexibility to lay down its own rules for study activity. Universities could, for example, loosen compulsory registration for courses and exams.

Prorector for Education Lykke Friis emphasises that the agreement will allow UCPH to reduce graduation times and avoid government fines.

“It’s a relief to be rid of the requirement for forced registration of students for courses and exams. We hope that the new agreement will make it possible to avoid the heavy progress fine of several hundred million Danish kroner. UCPH will not be able to pay a fine of that magnitude without compromising the quality of our study programmes. So we have agreed to monitor developments closely. Later we will consider whether we need to adjust the initiatives to ensure that the university meets the Ministry’s goal of reducing completion times,” she says on KUnet.dk

“Students should have both individual flexibility and room for in-depth immersion,” Prorector for Education Lykke Friis adds.

The new draft rules, and the committee’s recommendations for better and faster study completion, will now be sent for consultation in faculties, study boards and student organisations. They have until 19 May 2016 to comment on the recommendations and the draft rules. UCPH’s senior management will make the final decision subsequently.

The committee has recommended introducing a post-registration period prior to the semester start, which means August 2016, where students can withdraw registration from a course and register for another course that has vacancies.