Summer University: Making UCPH relevant to the outside community 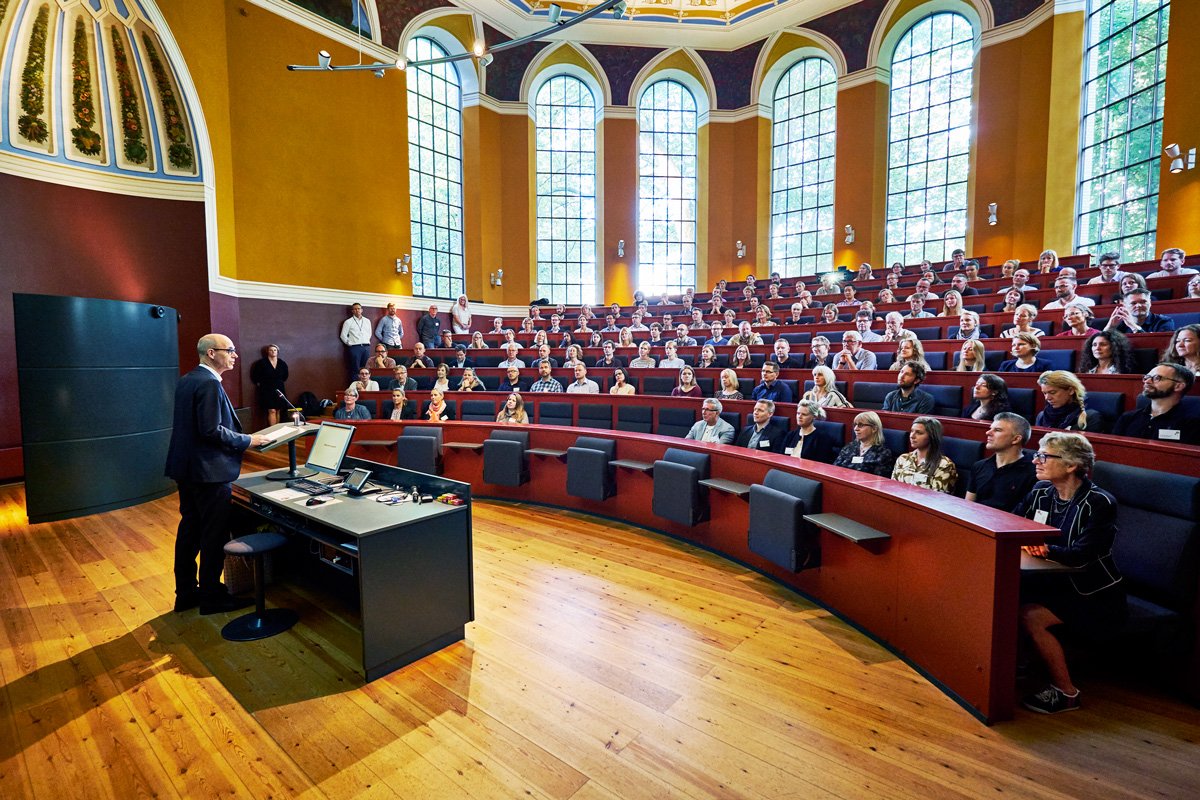 Summer University — Copenhagen Summer University, for specialists and managers, came to an end the 24th of August. It is a program held partly in order to prove that the research done at UCPH is relevant for the outside community. So, is UCPH still relevant?

On Monday the 14th of August people trickled in through the main entrance of Frederiksberg Campus as the clock approached 8:45.

»Welcome to Copenhagen Summer University,« said the slide projected above Thomas Bjørnholm, provost of research and innovation at UCPH, while he greeted the course participants with a speech.

»Our aim is to give you tools to understand the changes that are taking place in society today — e.g. technological advancements and concepts such as disruption. We hope that, once this week of heavy studies is over, you will return to your jobs better prepared to deal with these changes,« he concluded, and the specialists and managers went off to their classrooms to become students once again.

The University of Copenhagen held its 7th Copenhagen Summer University program between the 14th and 24th of August welcoming a record amount of attendees.

»This has been the best year yet,« said Thomas Sønderskov, one of the two senior advisors responsible for the program.

»We had 320 participants in total: 25 more people than last year. I think this is due to the reasonable price of our courses, and the fact that lifelong learning is on the rise. Companies know it’s an advantage to keep educating their employees and they’re investing in sending them to courses like these.«

Why does UCPH do it?

»There are two reasons why UCPH is doing this Summer University program. One of them is money. But money is not the main reason,« said Thomas Sønderskov.

»The main reason is to show that the research done at UCPH is relevant for the outside community: industries, state agencies, companies, and markets. To demonstrate that occupational professionals can benefit from our research, and that it has an impact.«

»And the money that we make — the profit after the training rooms, the food, the travel expenses of lecturers and other such things have been paid — is then given to the institutes and faculties of the course directors. That money can be very helpful now that UCPH went through serious funding cutbacks.«

»It is expensive,« commented Bo Ulrich Bertelsen, manager of the Children and Youth department in Herning Kommune, and added:

»Especially for those of us who don’t live in Copenhagen since travel expenses, housing, breakfast and dinner were not covered by the DKK 23.000. And this way less people can attend: people who could benefit from these courses but can not pay the fee.«

According to Thomas Sønderskov the law does not allow Copenhagen Summer University to price the courses lower than private providers on the summer school market to ensure fair competition.

This year’s Copenhagen Summer University originally consisted of 19 courses: ranging from topics such as Human Genome Variation and Biopharmaceuticals Drug Development to Crime Prevention and Deep Learning for Data Analytics. Three courses had to be cancelled due to an insufficient amount of applicants, but the rest made UCPH a total amount of DKK 7.360.000.

Money not the driving force

For some course directors the money involved is not the most important incentive.

Such was the case of Zeynep Tümer, researcher in molecular genetics at Rigshospitalet and the director of the Human Genome Variation course:

»I don’t do it for the money. Rather, it’s important for me to share my knowledge with others,« she said.

Her job as a director consisted of designing a relevant course, assembling the scientific content for the 5-day program, and finding and contacting the guest lecturers.

»I invited 25 lecturers from England, Sweden, Holland and Denmark. These were people I also wanted to hear — important people. I mean, one of them went to the ministry right after the lecture was over — to plan Denmark’s national genome project.«

After the end of the 7th Copenhagen Summer University for specialists and managers, one can ask the question: has UCPH achieved its goal? Did it prove that its research is relevant for the outside community — for companies and markets?

I had high expectations before I came here. I looked at the list of presenters and it was a very good list: there were lecturers who came from UCPH, but there were also people from big medicinal companies.

»I had high expectations before I came here. I looked at the list of presenters and it was a very good list: there were lecturers who came from UCPH, but there were also people from big medicinal companies,« continued Gitte, a woman with a masters in geography and health economics.

»And the course lived up to my expectations. They were able to cover a wide range of topics, and I liked that it had an international focus —one that did not only look at the Danish market for pharmaceuticals.«

»This course provided me with a different perspective on genetics and genomics studies and its application to precision medicine. Studying human genome variation in the US can be more complex than in countries like Denmark. This is because the population in the US is very admixed making it harder to determine which variation is actually causal for the disease you’re analyzing.«

Rajashree, student at the University of Pennsylvania, then added that »I also received the opportunity to try certain things I have learned about, but never applied in real life.«

The course Rajashree attended, led by Zeynep Tümer, served lectures in the morning and hands-on exercises in the afternoon.

Rajashree read about Copenhagen Summer University in a flyer that was sent to her by the leader of her lab. This same flyer was forwarded to Julia Kieckhaefer, PhD in cell and molecular biology: »I thought ‘oh, a free trip to Copenhagen funded by our lab, of course I would like to attend.’«

Julia, who is a researcher at the Children’s Hospital of Philadelphia, said the following about the Human Genome Variation course: »a lot of what this course covered I already learned during my PhD. But it was good to go over them again. It’s like re-watching a film: you’re like ‘oh, I missed that the first time around’ and discover new details.«

Steffen Bager, from the Danish Medicines Agency, and Karin Toftegaard, from ALK, mentioned that the network of people at these courses was a big positive: »there were people from around the world« said Karin and added that »we learned not only from the lecturers but from each other as well.«

Julia, Rajashree and Gitte also praised networking as a big plus at Copenhagen Summer University: »we got to know lecturers and students who work in our field, and we received some e-mail addresses. These could potentially lead to collaborations in the future« noted Rajashree Mishra from the Human Genome Variation course.

Not much to criticize

On the last day, Copenhagen Summer University provided the participants with an opportunity to give feedback on the courses and course leaders.

This is why Tina Reth, an attendee of the Crime Prevention course, said »I had some small issues with the course. I will mention them in the official response-form we were given.« Then she added »but the content of the course was really good.«

Some of the criticism voiced by participants of the Summer University is as follows: panel discussions were messy; higher standards should be set for the presenters concerning the usage of old presentation slides; and the chairs were too hard in the room just above the auditorium. However, the attendees behind these notes of criticism were happy with the overall experience, and requested that their names not be attached to these comments.

Bo Ulrich Bertelsen, an attendee of the Welfare of Voluntariness? – the development of the third sector and civil society course, commented:

»I think it’s good that Copenhagen Summer University offers new courses each year. In fact, I think it should do more of this: in my opinion, some of the courses have become outdated.«

This was Bo’s 4th time at the Summer University and he said he took a different course each time around.

Thomas Sønderskov said that the attendees on average grade the course they participated in with 4,6 points out of 5.

»About 50 percent of this year’s courses have been offered before, while the rest were new. This year we gave 3 courses a special pin for being with us for 5 years now. These are still relevant and popular courses and they will be offered next year as well. Also, based on the feedback we update the courses we repeat. Some of the directors of these courses say that they have made a new course each year based on feedback,« he said.

Getting ready for next year

Thomas has already begun work on next year’s Summer University. »I start searching for new courses and developing others, and by December I have to have next year’s courses signed up by the faculties« Thomas explained.

»My job is to figure out how to sell them and ask the question ‘is this a course people will want to attend?’ But the selection must also display a broad spectrum of what UCPH is capable of — what it can contribute to society with.«

To read more about the individual courses, or to see next year’s selection once it’s uploaded, check out copenhagensummeruniversity.ku.dk