Sustainability in a Student Bar 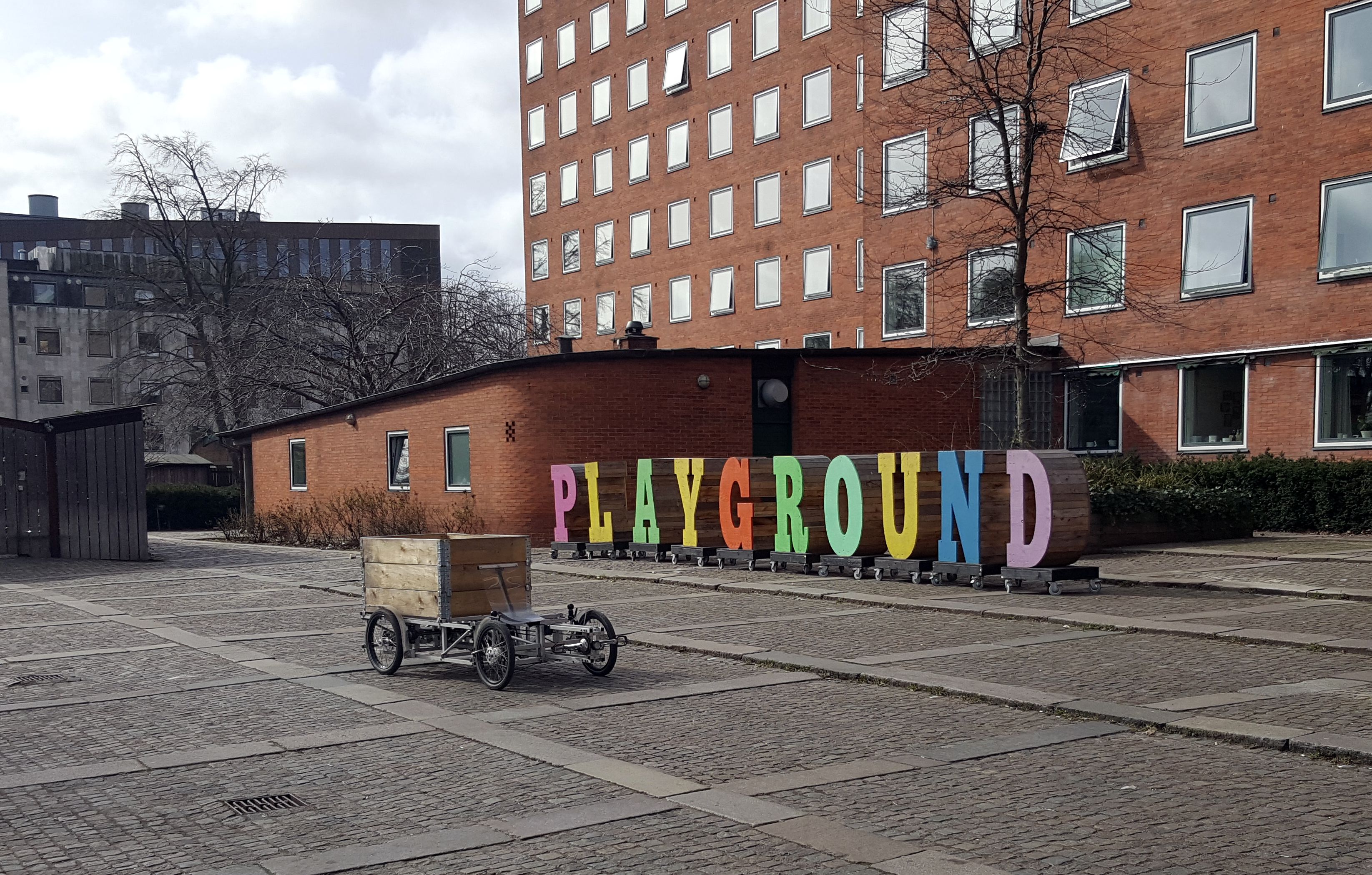 CONFERENCE — From the fear of global warming to eating insects, this event had it all. DANSIC conference "Reimagine Resources: PLAYGROUND" was an event for networking, intellectual inspiration and moderate thrills.

I am standing in front of a huge red-brick building. Human-size, colourful letters, put together to form the word “PLAYGROUND”, occur before my eyes. This sign refers to the subtitle of the conference, whose main theme is “Reimagine Resources”, and, together with similar ones spread across the whole venue, is a part of the “Happy Alphabet”, an art project created by Thomas Dambo, an artist / designer based in Copenhagen.

My sight catches also one of his other creations, an elephant made out of used paint buckets, which is another of the art projects spread throughout the whole conference venue.

The choice of venue for the event is a bit odd. It is not a professional site, but a student dorm, Egmont Kollegiet. As I am told later, this was a conscious move dictated by the will to underline the communal aspect of the innovation. That is why the presentations are made in the hallways and workshops organised in the student bar. And I must admit, it works quite well.

I approach the reception desk and receive one of those sticky wristbands that you get on festivals. One quick look at my watch shows me that I still have some time before the event’s beginning. Seeing some organisers already in places, yet still standing idle, I use this time to ask some questions. 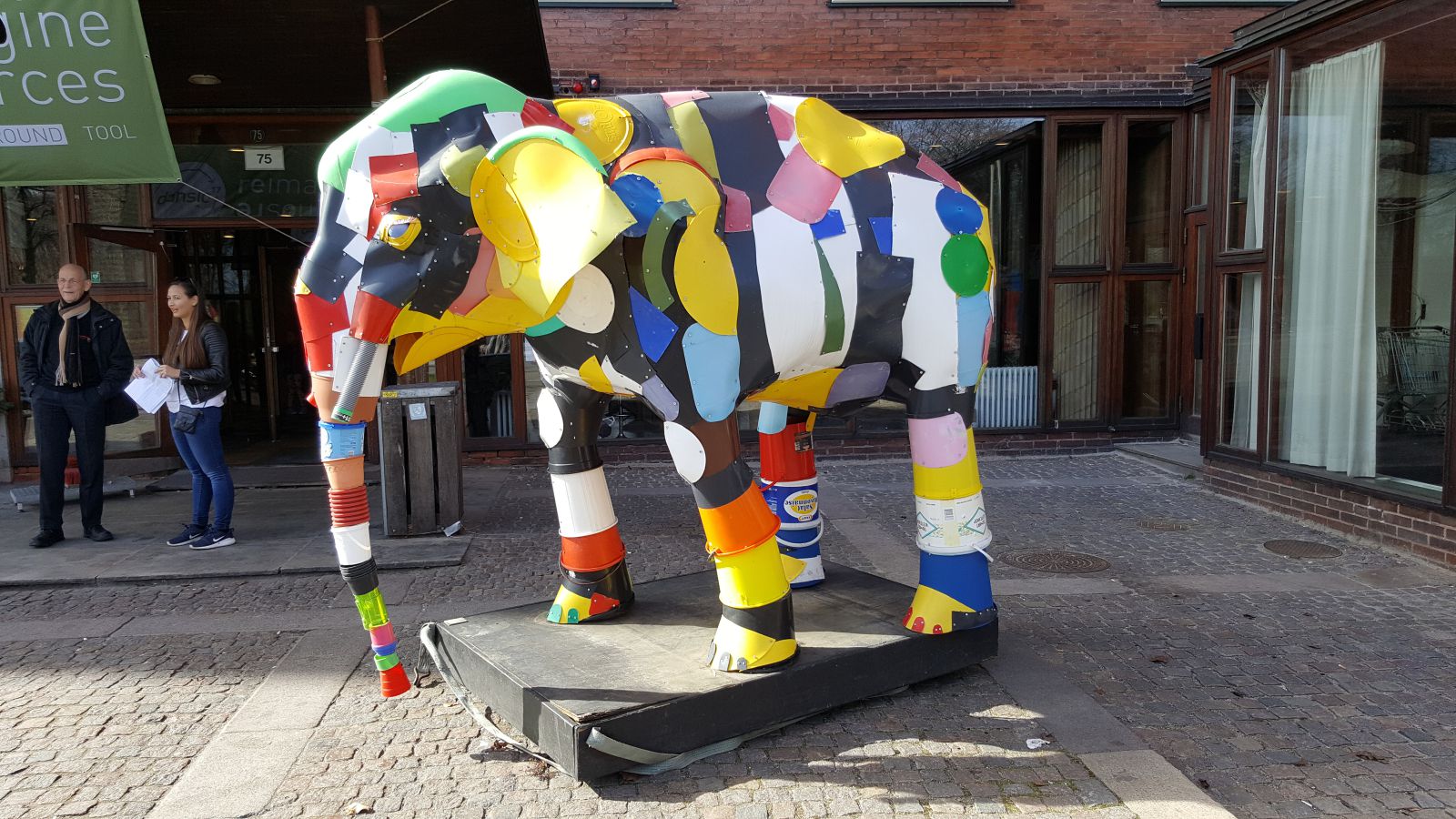 “The most awesome student job”

I meet Simon Svankjær Morel, the Innovation Design Director, who tells me, in few words, what DANSIC is all about. Created from the ground every year, DANSIC annually elects from its alumni new board, that is responsible for the selection of the fresh volunteer team and a novel theme. This, as Simon points out, ensures the highest degree of innovation and crisp ideas.

This leads me to another question: what is he doing there? “I was looking for something to do and I found what can be called a good job offer. Or even better, the most awesome student job” Simon responds. He currently studies Digital Design and Communication M.Sc. at the University of Copenhagen, and the position he got in DANSIC suits him, and his interests, perfectly.

I move to Jon Rantzau Harne, one of the Innovation Design Crew, who watches over another part of the venue. I approach him with a similar question. “It is a matter of give and take. I can help the local community, while learning a lot myself” he answers. The main task of DANSIC, according to him, is to inspire change, and one can do that within a great community.

I also swap a few words with Emilie Katrine Baagøe from the Event Crew, asking her about motivations to join DANSIC. She got a recommendation from a friend and having the global warming as one of her main fears it felt natural for her to join. And she is very happy about that, because, due to a small team comprising only of 25 people, she feels like it would be her own project.

Asked about the purpose of this particular conference Emilie points out that, by bringing people together, it strives to make the local community aware of multiple possibilities and initiatives, as well as celebrate the rising awareness of the environmental challenges and the solutions to them.

One more look at the watch, and I know that it is time to head back to the main auditory. I walk right into an a cappella performance, that makes the last minutes before the official opening more enjoyable. Few moments later the event is officially opened by DANSIC President, Malte Hertz Jansen, who is joined on the scene by a representative of the Egmont Kollegiet.

The programme is full of simultaneous talks, workshops, interactions and showcases, which all begin with Martin Lidegaard, member of the Danish Social Liberal Party, former Danish Minister of Climate, Energy and Building and the founder of the green think-tank CONCITO opening the day with remarks on the importance of the fight for the more sustainable society.

Cricket farm, cricket juice, cricket cracker – all made on mushrooms?

The halls get full pretty quickly and it takes some effort to review all of the showcases.  I approach what seems to be the beginning of “The Urban Ecosystem”. Beyond Coffee is a thriving start-up collecting from the local restaurants used coffee ground, a rich soil as it turns out, to grow oyster mushrooms on them. For all those, who would like to try this themselves, Beyond Coffee sells starting kits containing specially prepared box and a pack of mycelium.

Some of the mushroom substrate is used later by another presenter, Bugging Denmark, to feed the inhabitants of the first Danish cricket farm. Started by Jakob Lewin Rukov business is growing quickly and, similarly to Beyond Coffee, wants to offer home kits soon.

Crickets, rich in omega acids, calcium, magnesium, B12 and iron, are the main ingredients in the products of two producers. InsektKBH quenches thirst with a shot of apple cricket juice or “Femten Fårekyllinger” as it is called. Dare to Eat, on the other hand, offer something to bite in the form of cricket crackers that, as Jessica Buhl-Nielsen, one of Dare to Eat founders, assures me, taste the best when eaten with cheese.

Other presenters provide more engineered solutions. NaboSkab is a non-profit focused on the solutions supporting sharing economy and offering products such as swap boxes for joint use of tools, or trading stations for the exchange of goods that would be otherwise thrown out.

Praktisk.wtf is a hands on, practical organisation focused on prototyping and supporting innovation in a more practical way, with the use of CNC-machines, laser cutters and 3D printers. Currently they are working on tracking devices to help the organisators of Roskilde Festival in finding their staff. 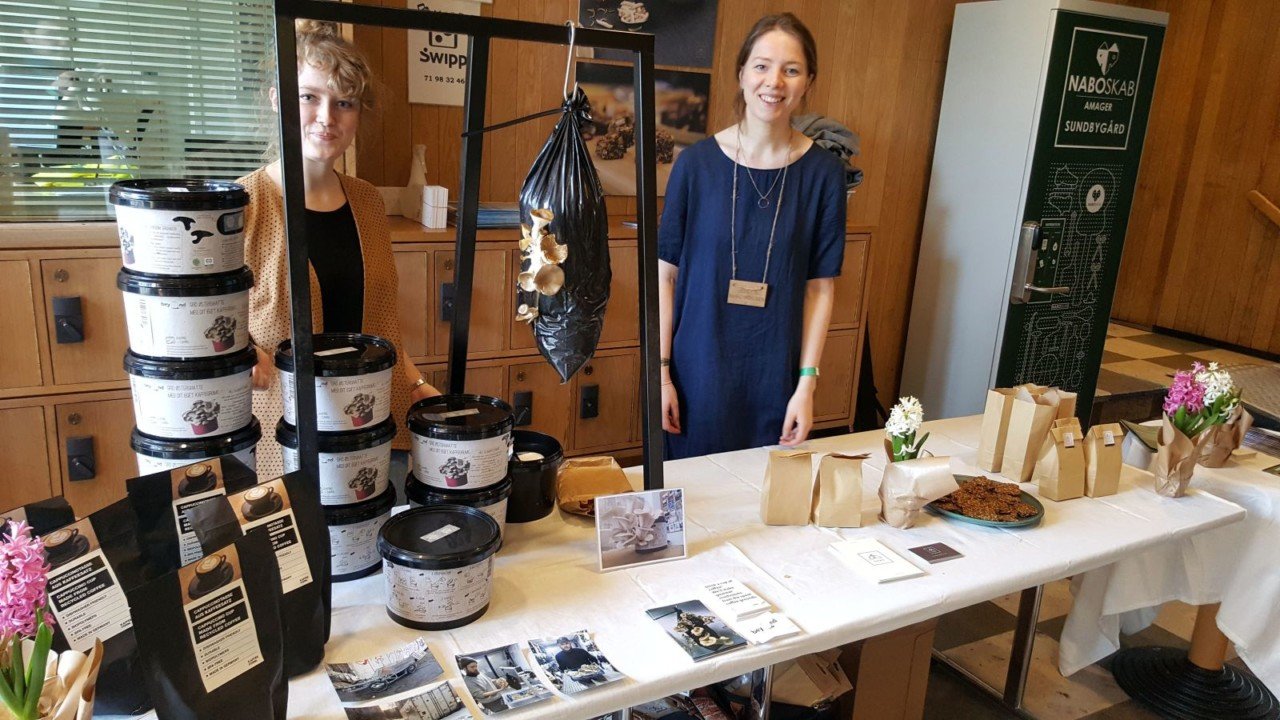 Beyond Coffee, Dare to Eat and NaboSkab - 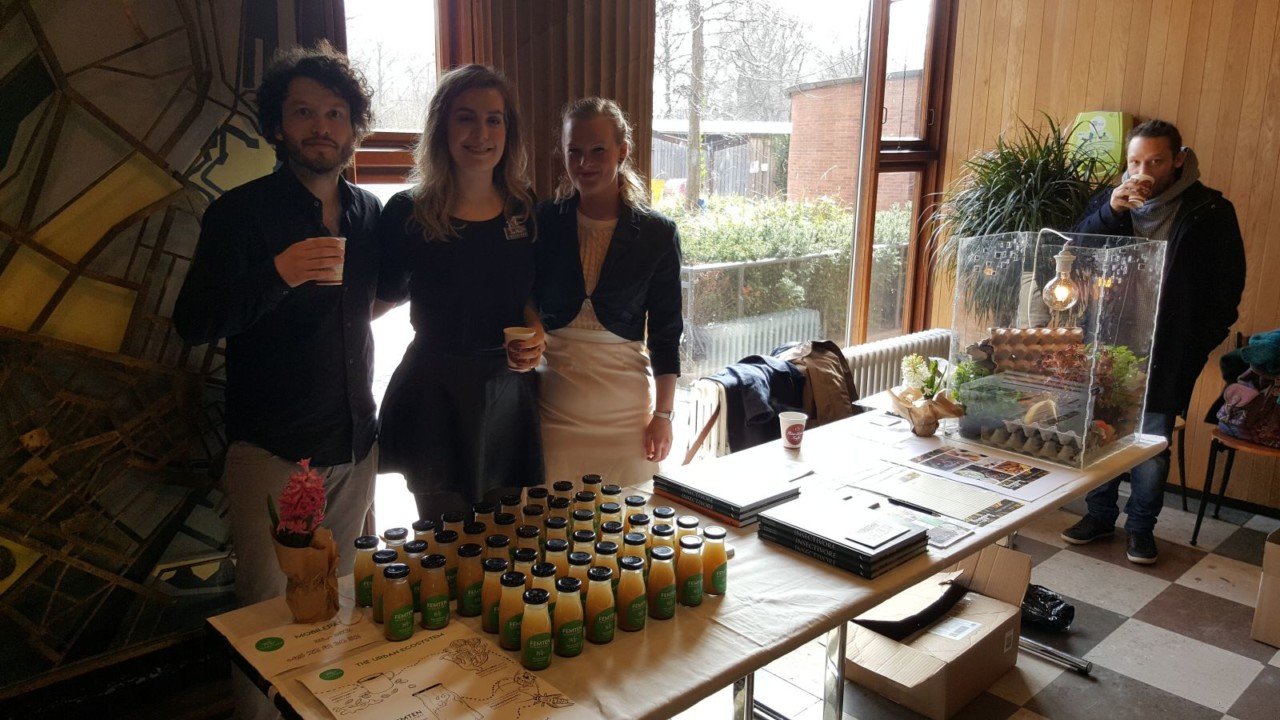 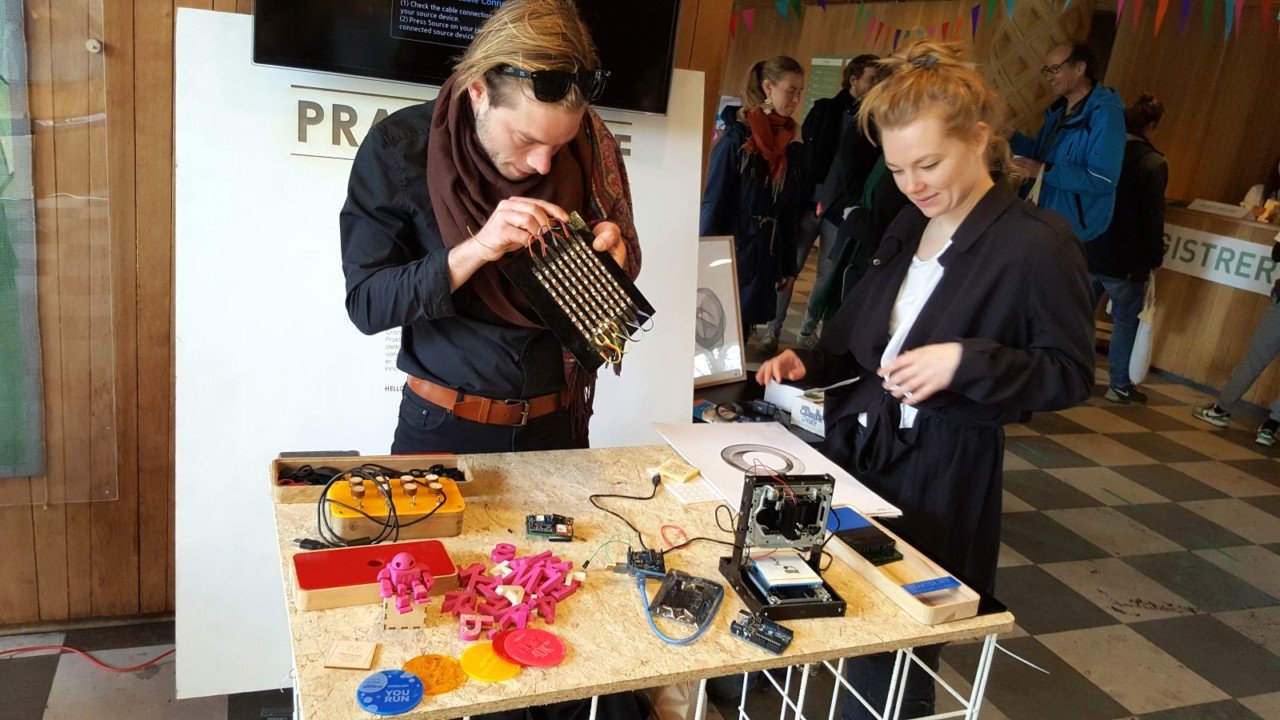 Having to choose from the talk and workshops offer, and with my Danish far from perfect, I am especially attracted by the English speaking workshop “Initiate Sustainable Solutions” made by the Transition Lab. Organised in the student bar, it starts with a dozen or so minutes of networking, accompanied by the typically Danish abundance of coffee and, among others, Raw Bites, only fruit and nut bars supplied by one of DANSIC partners.

The title of the workshop does not lie, as we are quickly asked to choose tables representing different problems in the area of sustainability and start working on actual solutions. After some time for brainstorming our small table-teams are forced to choose one idea, that will be developed over the next hour with the help of tools provided by Transition Lab.

Some ideas include the building ecosystems and self-grown mushroom textiles, but the biggest career seems to be made by “Garbage Dinner”, the idea to organise cyclical events for people to communally cook their leftovers. Its popularity is partly owed to the fact, that its inventors promised to organise the first garbage dinners in the near future. For those interested then, look for #garbagedinner and join with your unwanted food remains.

After the workshop I take a chance to talk with its organisers. A team of four, Florentina Bajraktari, Sarah Forrester Wilson, Rosamund Mosse and Gabriel Neira Voto are all alumni of the Master Program in Strategic Leadership towards Sustainability at the Blekinge Institute of Technology. Not wanting to join the traditional workforce, they decided to redefine how they want to work and formed Transition Lab to help businesses and organisations move towards more sustainable practices. Planning to move into the Øresund Region they found the cooperation with DANSIC mutually beneficent and joined the “PLAYGROUND” conference.

These words announce the last point on the program, which means that it is time for me to go head back to Sweden. After the whole day at the event I am more exhausted than over the whole week of work. I board the train and, crossing the Øresund bridge, I think about the evening coffee that awaits me at home. And this time I will know what to do with used coffee grounds.