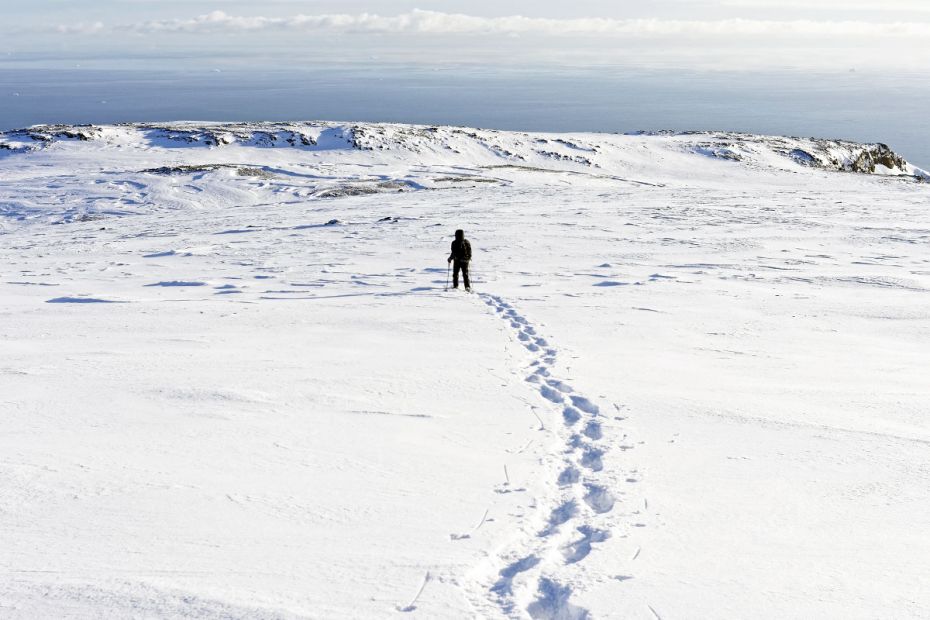 ADVENT CALENDAR 2016 - Off the west coast of Greenland is a research station called the Arctic Station. The University Post visited it in late October. How is research done here where the northern lights are all just part of the job? See the photos and read our stories from Greenland in the days up to Christmas Eve

Creeeak, plufff, Creeeak, plufff. The sound of snowshoes carrying us up the hillside at an altitude of 700 metres. A bit annoying when everything else is so perfectly still. But they are stepping on the finest blue-white powder.

In front is Casper T. Christiansen, a 35-year-old station manager of Arctic Station, a research station that the University of Copenhagen has operated and owned on Disko Island in West Greenland since 1953. The University Post follows in Casper’s snow shoe footsteps up the trail on the back of the mountain Lyngmarksfjeldet one day in late October.

The view on the way down is just as breathtaking as on the way up the back side of the mountain. The sun’s rays reflect dazzlingly low out of the Arctic Ocean and from there on into the mountain peak’s deep snow. A few hundred meters below the summit we encounter tracks of foxes.

As we approach the top of the 804 meter high mountain, the temperature drops steadily towards minus 10 degrees. And although the weather is great for Greenland, the buffering of the insistent cold wind from the glaciers on the island’s center gets up under your hat.

Snowshoes are noisy; but we are quite silent. It is a demanding ascent, and when we slipped in snowshoes at 600 meters altitude, the reporter felt like a bamby on ice. But here I clench my teeth, as I am on a mission for the Arctic Station.

Casper is a polar explorer and has various projects underway on the island. Some of them – about a thousand – are in the shape of small tea bags, which he has put out onto the tundra outside the Arctic Station. The bags are made of finely woven net of synthetic material. In them is green tea, roibos or local leaves and twigs.

Casper is researching the carbon balance in the Arctic, and he uses the tea bags to study the decomposition of organic material in summer and winter. There is a surprisingly large decomposition during winter time, and this may have consequences.

Casper looks at some of his tea bags with some organic content in them – they can tell us about the state of the carbon balance of Arctic tundra.

Soils in the permafrost region contain about half of all the carbon that is found in all the world’s soils. If more of it is degraded as a result of temperature increases and climate change, it can release more of the climate gases CO2 and methane and affect the atmosphere and lead to a warmer climate.

It is not the tea bags, however, that Casper is to go out and look at today. He is also responsible for the station’s environmental monitoring programme. The station, we are going up to today, is the hardest to reach of them all.

When we come up to the top of the Lyngmarkfjeldet mountain, we can see down to the sea. It’s a wild sea. To the west, Baffin Bay stretches 500 km to Canada. In the harbour at the foot of the mountain is the Arctic Station’s research ship, Porsild. The island has no roads, so Porsild may be the only way to get around if you do not sail by speedboat or fly by helicopter.

Porsild was last in action two days ago, when Casper had to take water samples in the sea at 300 meters depth. Before long it will freeze in the ice in the port of Qeqertarsuaq, and will be left there until the coming of spring.

The research ship Porsild an early October morning in the port of Qeqertarsuaq, one km from the Arctic Station

During the summer months the Arctic Station is swarming with both researchers and flora. Approximately half af all Greenland’s plant species grow on Disko Island, so the 25 researchers who can stay at the station, have plenty to keep them busy. Most people sleep in rooms like cubicles on the first floor, but there are some more comfortable and private professor rooms.

This is the one that this University Post reporter got, as here in October there are no other staying guests. Casper has his station manager home 100 metres away, and the northern lights flicker in green at night.

The goal of this particular hike was a 30×30 cm plastic box with a Canon D5 top model SLR camera inside. It automatically takes pictures of the sea off Disko Island several times a day, so researchers can estimate the extent of sea ice in the winter and the meltwater emission of sediment in the summer.

Casper extracts data out of the camera’s image memory, then he adjusts the settings on it, and on some associated equipment. It is tough when you to have your gloves off in the cold, while at the same time holding a fluttering sheet of A4 paper with a colleague’s instructions.

Casper takes a shortcut across a strange-looking rocky terrain which we climb through while frozen waterfalls attract our attention. Before the first frost, they were streams. It is the kind of vision that you could pay DKK 30,000 to see on a guided tour to the Arctic.

Finally Casper gets the box secured, and we can walk over the flat top of the Lyngmarksfjeldet to find a suitable place for the descent of the mountain.

The view on the way down is just as breathtaking as on the way up the back side of the mountain. The sun’s rays reflect dazzlingly low out of the Arctic Ocean and from there on into the mountain peak’s deep snow. A few hundred meters below the summit we encounter tracks of foxes.

Polar researchers should take care of each other

Snowshoes are no guarantee against slipping down the steep mountain, and sometimes we lose our footing. It is due to the large rocks that jut up in many places. They are exceptionally sharp, and there is much to learn when you walk with a polar explorer. Up here you have to take good care of yourself – and each other.

Further down we walk without the snow shoes, and Casper takes a shortcut across a strange-looking rocky terrain which we climb through while frozen waterfalls attract our attention. Before the first frost, they were streams. It is the kind of vision that you could pay DKK 30,000 to see on a guided tour to the Arctic.

Our expedition began at 8 in the morning, and when we finally come out of the rocky area at 5 pm, we can see the Arctic Station’s red wooden buildings ahead of us. The same sight as 110 years of glaciologists, geographers, geologists, marine biologists, whale researchers and ecologists. All of them were here for the Arctic.

All employees at the Arctic Station in front of the main building from left to right: Station administrator Kjeld Akaaraq Emil Mølgaard, station manager Casper T. Christiansen, sailor and station assistant Erik Wille and Porsild captain Frode Vest Hansen. The article was published in Danish in the Uniavisen magazine 25 November.