The future of student housing is floating 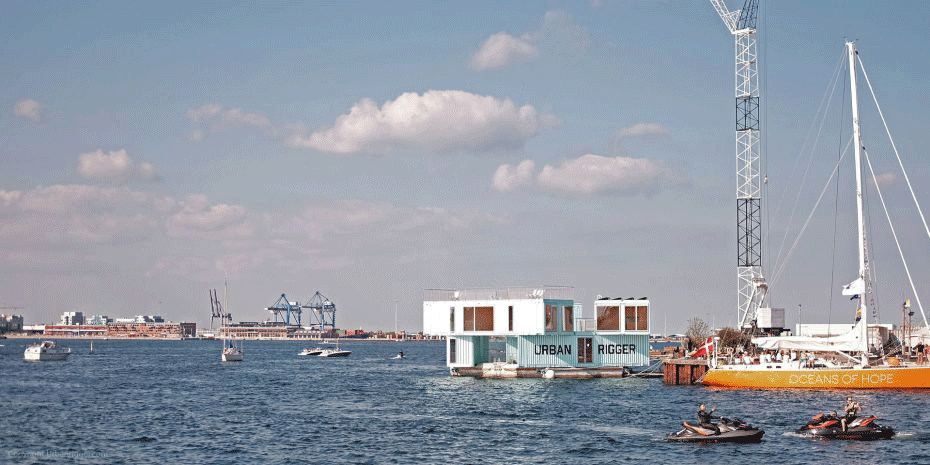 The Architect Bjarke Ingels has designed student apartments in old shipping containers, which are powered by solar energy and float on a pontoon. The company behind the units, Urban Riggers, will soon open a floating collegium on Kalvebod Brygge for students at the University of Copenhagen.

Three years ago, entrepreneur Kim Loudrop’s son was on the hunt for accommodation in Copenhagen. But just like thousands of other students, he couldn’t find anywhere to live. That’s how the idea to transform old shipping containers into cheap student housing was born.

“At first I didn’t believe that it was so difficult to find somewhere to live as a student. But then I could see that there was a huge demand for housing. I knew Bjarke Ingels through a common friend and he was quickly on board with the idea,” says Loudrop, founder and CEO of Urban Rigger, convert old shipping containers into apartments for students, which are situated on a pontoon floating on the water.

Leading architect Bjarke Ingels designed the student housing units, which are 80 percent powered by solar energy. Each housing unit is 24 – 27 square metres and is fitted with a kitchen, dining and sleeping areas, and abathroom.

The apartments will cost between 4000 and 6000 kroner per month.

“It should be economically viable for young people to live in these units. There is a lot of talk about building quickly for students, but we want to build something which inspires young people and offers them a calm space for their studies. They are, after all, Denmark’s future,” says Loudrup.

The student accommodation is built out of old shipping containers and placed on a pontoon by the harbour.

A collegium on Kalvebod Brygge

On its first application, Urban Rigger was granted permission by the municipality of Copenhagen to build a floating collegium by the harbour Kalvebod Brygge. 12 University of Copenhagen students have been offered a place for when the container units are ready.

However the company hopes to gain permission to open more floating student residences in Copenhagen in the near future.

“We have offered to deliver 1, 200 student residences to the municipality of Copenhagen within the next year, without it costing them a krone. They just need to give permission and space for moorings,” says Loudrup.

There are 12 units per pontoon.

Thus far, 3000 students have expressed interest in the project, which has also been covered by international media outlets such as Fortune, CNN and Al Jazeera. Urban Rigger has received messages from people across the world eager to learn more about the floating student accommodation.

“There is certainly a need for cheap student housing the world over – not just in Copenhagen. Gothernburg has ordered 24 Urban Rigs containing 288 student units in total. The interest is quite overwhelming,” says Loudrup.