The oldest and strangest kinds of death 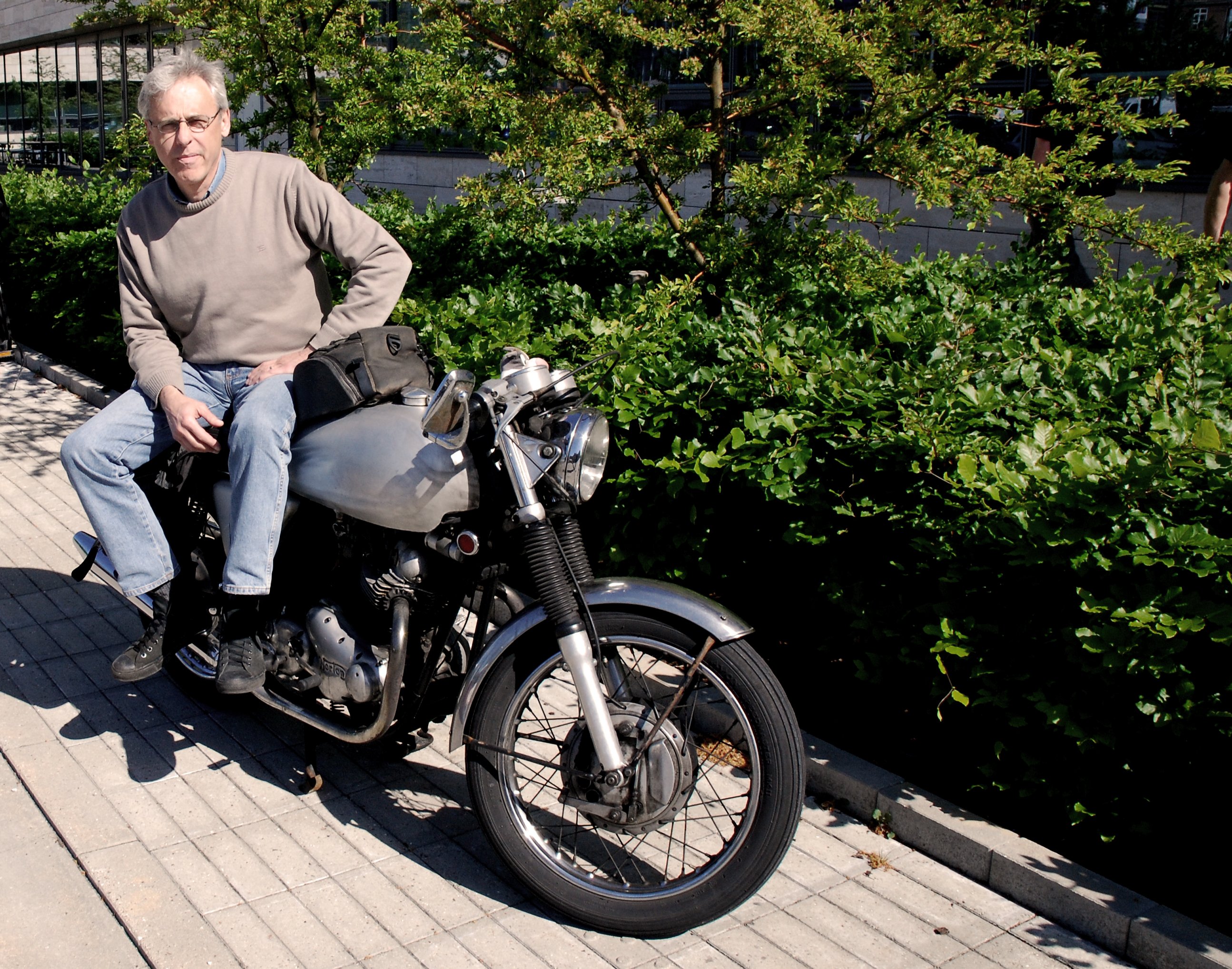 John Mundy is nuts about classic motorcycles: This one, a Norton, is from 1971.
image: Mike Young

For molecular biologist John Mundy, big questions about life and death are answered by the many deaths of tiny cells.

It can seem a bit morbid. When Professor John Mundy of the University of Copenhagen explains his and his colleagues’ research to the uninitiated, he talks about plant cells as if they were you, a human being. You have sex and give birth to babies. Perversely, you devour others, and when starved, you eat yourself.

Of course cells are not humans. But when you hear about their many ways of death, you can’t help wondering about the wider, metaphysical, questions.

Look at your hand: the flesh and skin has developed around the bones of your fingers, but not in between – like the webbed toes of a duck. This is because when you were an embryo, cells were shed through apoptosis, and devoured by the surrounding cells.

»What is interesting to me as a biologist is that large multi-cellular animals have apoptosis, while plant cells do not appear to die this way. And yet every fall we are surrounded by the real shedding of leaves. The question is: What is happening here?« he asks.

Mass suicide
»If you imagine that plants aren’t as highly developed as animals, then the death that plants use might be an ancient invention. When we look at how plants die then, we may be looking at a very old and simple type of death, perhaps the simplest and oldest one.

And if it is very old, then maybe we animals also use it, but have also elaborated on it and developed processes like apoptosis,« he says, before quickly adding that, »of course, the claim that plants are less highly developed is idiotic.«

Cell suicide is also an important part of the plants’ immune system. Brownish spots on leaves, for example, are often regions of cells that have collectively popped themselves off in a mass suicide spree in order to isolate a pathogen so that it does not have anything to feed on.

Genetics back and forwards
Research into plants’ immune system has practical implications for agriculture. Finding out how cells die in a fundamental sense, is finding out how to combat disease and infestation. For John Mundy and his colleagues and students, this takes place in laboratories, growth chambers and greenhouses at the Biocenter in Copenhagen.

The main focus has been on Arabidopsis. This is a plant that has been the buzz of the plant biology community ever since its genome was sequenced in the 1990s. Otherwise unremarkable, it pollinates and reproduces large numbers of itself in a small time frame, making it ideal for the type of modelling that gene-researchers revel in.

As John Mundy explains, Arabidopsis is good for both what is called forward and reverse genetics to find out how cells are programmed to die:

In forward genetics the researchers induce many random mutations. »You can never have too many mutants,« says John. Next they screen the progeny to isolate mutants that are death-resistant. Then they identify the genes normally required for death that have had been disrupted by the mutation.

In reverse genetics, scientists use the known DNA sequences of Arabidopsis genes to knock out particular genes in a normal plant, thereby finding out what combination of genes leads to, or is required for, cell death.

Mythological snake
When it comes to cell death, the weirdest form has got to be autophagi, where a cell devours itself. This process, which John Mundy and his colleagues study in Arabidopsis, is like the Ouroborus, the mythological figure of a snake eating its tail. The cell commits suicide by eating chunks of itself until there is nothing left. Mind boggling.

John Mundy sums it up in a deadpan refrain. »There are many ways to commit suicide.«
For him it is not just cells, plants and controlling disease.

»Yes, the study of cells and plants has a profound importance for agriculture. But the fascination for me is the balance between life and death.«