The secret ´Science and Cocktails´ recipe 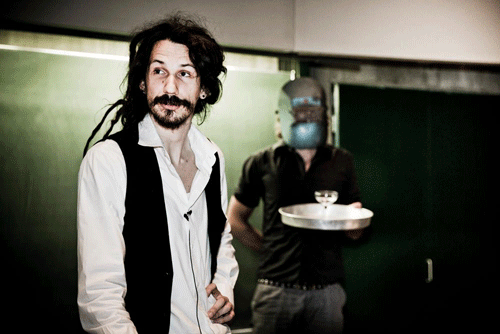 With a glorious new season of Science & Cocktails kicking off, here’s the back story you never knew about

Jácome Armas is not just your everyday researcher on black holes and string theory. Nor merely scientific advisor to the government on the autonomous Portuguese archipelago of the Azores. Nope, this guy is a winner of the Genius Prize for science communication and the founder and main organiser of Science & Cocktails.

Science and Cocktails is one of Copenhagen’s top event series, and the University Post caught up with Jácome for some details from Brussels, where he’s been a postdoc for the past three years.

Science at the bar

“An inflexible education system has contributed to a negative attitude towards science, associating knowledge acquisition with not-so-pleasant experiences, contrary to listening to music or watching a movie.”

“We started out with around 40 attendees and it took about three years to reach 250. Nowadays, it has an audience of 700, and it would be more if it were not for space constraints. We began with the sort of format that has been tried countless times before: the so-called cafe scientifique or science at the bar. Upon moving to a new location – Byens Lys – things took an unexpected turn, mostly due to human resources such as artists and musicians and a culture of volunteers.”

“In retrospect, I have come to understand that there is great public interest in scientific knowledge. It is to modern societies what mythology was to mythical societies: a way of asking basic questions and understanding human nature.”

“An inflexible education system has contributed to a negative attitude towards science, associating knowledge acquisition with not-so-pleasant experiences, contrary to listening to music or watching a movie. To turn things around, I find it necessary to deconstruct the academic environment, placing knowledge out of context and mediating it through artistic forms. I believe something like S&C was due to appear in the cultural sphere.”

“No matter the day of the week or research topic, S&C can compete with any cultural event in the city. When else have events revolving around scientific knowledge rated among the options for going out on, say, a Saturday night?”

S&C follows ‘a policy of free knowledge sharing and aspires towards ‘a night culture that evolves around knowledge, discussion and entertainment’. To what extent would you say it manages to contribute to this twin vision?
“I think that S&C has been faithful to its vision. Against all odds and without any institutional support, it has succeeded in bringing world-class researchers and communicators to Denmark, to freely share their knowledge. It has also been able to provide a window of visibility for Danish researchers to freely share their knowledge via a series of online recordings of lectures. It is difficult to regularly organise something that is part of people’s daily lives regardless of the area of scientific knowledge.”

“The difficulty increases if you want to be truly faithful to the principles of science and provide lectures with core scientific results. As a social event it has managed the unthinkable: No matter the day of the week or research topic, S&C can compete with any cultural event in the city. When else have events revolving around scientific knowledge rated among the options for going out on, say, a Saturday night?”

Last summer, Johannesburg became the first city outside of Copenhagen to adopt the concept. In what ways is it different, and what’s the experience been like so far?

“The S&C branch in Johannesburg has been an unexpected surprise. The general public there is just as eager for knowledge as in Copenhagen. Konstantinos Zoubos, one of the people involved in Copenhagen, moved to South Africa and took the concept with him. From the word go, there has been a steady audience of 200-250 people at every lecture – the full capacity of the venue, which is a cool jazz club in the upbeat neighbourhood of Braamfontein. The events follow pretty much the same structure: dry ice cocktails, people in lab coats, virtual hosts, high-quality lectures and music concerts.”

2014 winner of The Genius Prize for science communication

“The atmosphere is relaxed: if you happened to land there in a space rocket, you wouldn’t know whether you were in South Africa or at a jazz bar in Copenhagen. One of the reasons for this success in South Africa has been the incredible media support. Science journalists in South Africa are extremely active. By way of contrast, in Copenhagen, barring a few exceptions such as the recent discussion on pig MRSA following an S&C event, science journalists have not used the potential of this platform to access first-rate information.”

I feel an obligation to contribute to society

S&C re-invests its modest profits into supporting future events, and has considered putting funds towards research in developing countries. What sort of turnover are we talking about here, and what uses have you been able to put it to so far?

“There is a low turnover of around DKK 4,000 per event. The events are free and not everyone who attends contributes to them. We increasingly raise our standards of speakers, occasionally flying them in, which can be really expensive. At the moment, we send whatever we can spare to South Africa to develop their programme and make it accessible to the public. When I was there co-organising one of the events, it was clear that several people were able to be at a venue that would be inaccessible for them on other occasions due to large entrance fees.”

“There are plenty of funny stories. A Field Medallist had to be driven home at two am in a Christiania bike. Renowned scientists having to be walked to their hotel in the middle of the night because they could barely say their own name”

In 2014, you accepted the Genius Prize for science communication for this initiative, which brings researchers and the public together in a relaxed atmosphere that enables lively discussions on scientific topics. What has changed for you since you started S&C in 2010, and to what extent has it been a part of your journey?

“What started as a hobby has today become a full-time volunteer job alongside my career. Nowadays, I feel an obligation to contribute to society and Copenhagen’s cultural life by helping maintain this platform. I became a full-time researcher at the same time as I became heavily involved in science outreach activities. My wish is to be able to return to Denmark as soon as possible and help take S&C to another level: this is unfortunately extremely difficult given my area of research.”

Since you’re currently based in Brussels, who are the people who volunteer their time to keep S&C running? What is the process through which the team ensures that it curates a programme of high-quality, absorbing talks, funky versatile musical acts, and wicked dry ice cocktails for its bi-annual seasons?

“For the past three years, I have been returning to Denmark for a week every month, on my own penny, to maintain this platform. I think it is an important asset for the city and for Danish researchers – if I don’t do it, someone else must. However, I want to stress that are many other people who put a large amount of effort in this. Our current team numbers over 30 people from more than ten countries. Our backgrounds vary greatly: we have professors, engineers, computer geeks, musicians, artists, bartenders, mixologists, carpenters, electricians, postdocs, PhDs, students and communicators. All contribute on a voluntary basis, and I like to think of us as a group of friends.”

S & C brings researchers and the public together in a relaxed atmosphere that enables lively discussions on scientific topics. Photo: Martin Kufah

“We are organised in different groups, with one group curating the programme. Their expertise in diverse areas of science makes it possible to develop an engaging programme. Besides, we include suggestions from our network of past S&C speakers. Sometimes, we are guided by topics of current interest, and try to bring the truth out and demystify incorrect views of science or misinformation on given knowledge areas. Similarly, we have groups in charge of the music acts and of the development of new cocktail mixtures, which we constantly try to improve!”

Kicking off next week

Would you share a couple of the most amusing stories for the S&C fans out there?

“There are plenty of funny stories. A Field Medallist had to be driven home at two am in a Christiania bike. Renowned scientists having to be walked to their hotel in the middle of the night because they could barely say their own name; a famous scientist and science journalist who had to knock on random doors and stay overnight at a stranger’s house because they couldn’t find their way home late at night; and a well-known scientist who had to be pushed up the stairs to his apartment because he could no longer move himself. But it all just indicates how much fun the speakers have during these events!”

“One day, you will be able to turn on your TV screen and watch a brand-new S&C episode. At that moment, you will realise that the best way to digest and understand knowledge is to take it easy”

We have yet another great season of S&C lined up for us, kicking off next week. What are some of the highlights – anything in particular we should look out for?

“Some of the most interesting topics this season are the events on pre-Aztec archaeology this coming 12 March, the event on secure communication and quantum computers on 16 April, deep sea research on the 26 April and twin psychology studies on the 7 May. If I had to pick one, it would be the one on pre-Aztec archaeology, featuring research on how the first metropolitan city was constructed and organised, how it was built up based on a mythic society, and how it fell. This can have strong implications for understanding the feasibility of the way we organise ourselves in modern times. The speaker, David Carballo from Boston University, is a pioneering researcher and excellent communicator.”

Anything else you’d like to share? One of those secret cocktail recipes, perhaps? Photo: Marie Elisabeth Colin

“One day, you will be able to turn on your TV screen and watch a brand-new S&C episode. At that moment, you will realise that the best way to digest and understand knowledge is to take it easy, chill in the comfort of your home, take 6 cl of Gosling’s black seal rum, 2 cl of freshly-squeezed lime juice, 2 cl of homemade farin syrup, 0.5 cl of freshly-squeezed ginger, shake it all up and well, and drink it on the rocks. Until then, however, you can simply show up at one of our upcoming events and enjoy the atmosphere.”