The university's - No Copenhagen's! - most attractive workplace 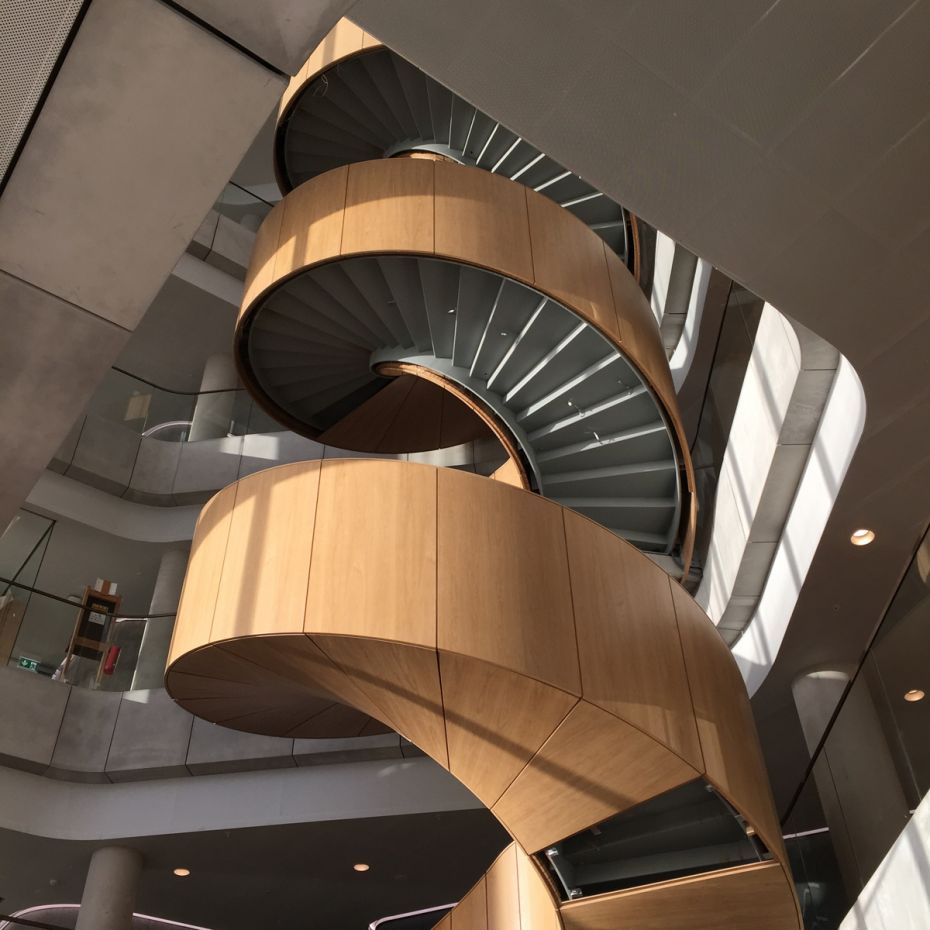 The University of Copenhagen let the press in to the Maersk Tower one week before the official inauguration. We were blown away. What do you think?

You can understand why Ulla Wewer is happy and proud.

The Dean of the Faculty of Health and Medical Sciences is standing in an exceptionally beautiful auditorium in the DKK 1.5 billion price-tagged Maersk Tower presenting the University of Copenhagen’s (UCPH) new landmark to a small army of interested journalists with words like ‘international level’ and ‘great setting’.

It is also to be expected that the senior advisor from the Danish Building and Property Agency (the builder and owner of the building that will rent it out to UCPH) looks happy – and that the architect behind the project exudes a good deal of pride in his giant baby.

What might not be expected is the enthusiasm from the scientists who are present, and who will soon be able to move into the 75 meter tall tower.

“We love the tower,” says Professor Thue Schwartz, as he stands on the sixth floor, on what will be the home of metabolism research at UCPH, and looking up a curved staircase that, as here – in the middle of the building – opens up the space and connects the floors at the same time.

Expensive – and it shows

The Maersk Tower is the result of a DKK 600m donation from the A. P. Møller Foundation, which also donated DKK 125m to furnishings. The Danish parliament also coughed up DKK 670m – with the remaining costs to be covered by UCPH rental income.

It is an expensive construction project – and it shows. This is certainly the first impression, at least when you are given an hour-long tour of the building. Whether the building is just as good to use – only time will tell.

It is also a delayed project. Originally, the building was to be finished in mid- 2015. Now it will be on Wednesday, 18th January, 2017, that the Queen will officially inaugurate the building. So far, only the lower floors, the so-called base floors, will be opened, and they include the auditorium and the canteen. In late spring, the tower’s residents will be allowed to move in. And then, when all the construction mess is gone, landscape architects and gardeners will finish up the park area around the tower.

Follow us on a tour of the building – and go and take a look for yourself after the Queen has cut the ribbon on 18th January.

The nicest LECTURE ROOM at UCPH? The tour starts in the Nielsine Nielsen Auditorium, named after Denmark’s first female doctor. (In addition, there are auditoriums named after the Nobel Prize recipient (1984) and UCPH alumnus Niels K. Jerne and named after Jens Juul Holst – professor of medical physiology, who discovered the gastrointestinal hormone GLP1 (also known as Novo’s golden egg) – and who is indeed still doing research at UCPH). Photo: Christoffer Zieler

THE LOBBY – The entrance to the tower faces a new square on Blegdamsvej street. Three wide staircases in the lobby lead up to the building’s first floor, where there is access to several auditoriums. Photo: Christoffer Zieler

SHADOWS – The building’s lower floors – also called the base – consist of four low buildings that are placed in a kind of star formation. On the top of the base the tower’s 15 floors rise up. Photo: Dennis Christiansen.

FOOD! – In the base, in addition to the auditoriums, there is also the quite photogenic canteen. Photo: Christoffer Zieler

BACKLIGHT- Even on the tower’s sixth floor the view of Copenhagen is Instagram-worthy. Photo: Dennis Christiansen

THE SPIRAL – On the 6th to 8th floor there will be the Novo Nordisk Foundation Center for Basic Metabolic Research. A large, open space with a spiral staircase will connect the floors and will also act as an informal meeting place for researchers (it is also here that they can fetch coffee, and Professor Thue Schwartz is also going to lug a table football in here). Photo: Dennis Christiansen

OPEN SPACE – The spiral staircase extends throughout the entire building. Here it is seen from one of the other floors. Photo: Christoffer Zieler

HOLE IN THE FLOOR – Small holes in the floor of the sixth floor offer a curious – and dizzying – look at the floors below. Photo: Dennis Christiansen

FUME HOOD – The Maersk Tower laboratories all have views over Copenhagen – just like most of the offices. One requirement for the developer from scientists has been that it should be easy (and cheap) to change the partitioning of rooms and the laboratory interiors. Photo: Christoffer Zieler

VIEW – When you walk around the 15th floor, you get a – for Copenhagen unique – 360 degree view of the city. The tower was originally conceived with a roof terrace with free public access. But the funding didn’t go that far. However, the 15th floor will be used for public purposes, says Dean Ulla Wewer. Photo: Christoffer Zieler

WAX ON WAX OFF – Two window cleaners become, more or less involuntarily, a part of the tour. Photo: Dennis Christiansen

NEIGHBOURS – From the top of the tower’s eastern corner you can see the roof of Panum, the Rigshospitalet hospital (the helideck of which is level with the 15th floor), the Østerbro district, and in the background Nordhavn, Langelinie and waters of the Øresund. Photo: Dennis Christiansen

TAGS – Builders’ graffiti on the elevator’s (still) rough walls is expected to be removed before the Queen’s visit. Photo: Dennis Christiansen

DOWN ON EARTH – Back on the lower floors, you can enjoy the interaction between wooden floors and ceilings, concrete pillars and the winter sun. Photo: Dennis Christiansen

STATE OF THE AUDITORIUM-ART – The tower’s large auditorium can accommodate 500 students – and will be linked to the other lecture halls, so a total of 1,000 can attend the same lecture. All will be equipped with the so-called Constellation sound system, which is also at Stanford and at the United Nations. In short: 80 microphones in the ceiling capture the lecturer’s speech – whether or not he/she stands with her back to the audience – and the questions from the audience. There is no need to raise your voice and no need to mess with microphones and headsets. It works amazingly well. Photo: Christoffer Zieler

SIGN – The building’s signs are painted / pasted up on to the rough concrete. Note that you see a sign to the Vandrehallen walkway in the Old Panum building. And they do that because …

PANUM – … you can walk directly from the Maersk Tower and to the good old Panum (which by the way has been through some beautification to bring the older building facilities up to the newly built luxury standard next door). Photo: Christoffer Zieler

OUTSIDE – The Maersk Tower is located on a sloping site between Nørre Allé and Blegdamsvej. Paths and bridges lead pedestrians and cyclists through the green area surrounding the building. It will, however, be several months before the outdoor areas are finished (the tower construction has to be finished first). Photo: Christoffer Zieler

SHODDY – Sadly, the tower, when you get close up, is marred by shoddy workmanship in the details, such as the ceilings, where we saw examples of ceiling panels and skirting that had been added crooked. Here a portion of the floor is simply placed on top of a panel. Photo: Christoffer Zieler