This smoke is dangerous: Barbecues at DHL race worse than diesel fumes 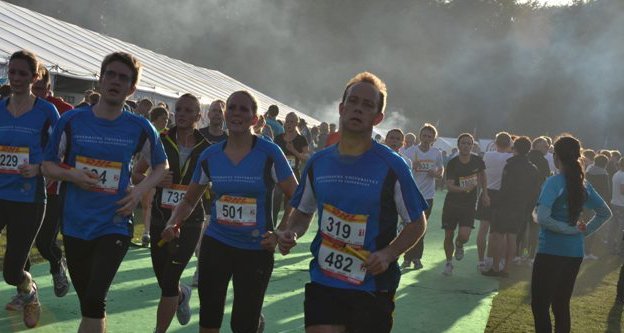 Best to hold your breath: Particles from grilled sausages are pushed down into your lungs at the DHL race (Photo from 2011)
image: Mariana Bollano

Chemistry student finds high levels of dangerous particles in in the air during last year's DHL relay. This year will be the same

An environmental chemistry student identified high levels of dangerous particles in the air in the central Copenhagen park, Fælledparken, during last year’s relay. The DHL relay which will take place Friday this year is also through a gauntlet of barbecues.

“The park contains the same level of particle density as the main platform at Nørreport station, which is an enclosed space with diesel fumes,” says Maria Bech Poulsen who conducted the study last summer. This is according to a release by the Department of Chemistry, University of Copenhagen (UCPH).

The so-called ‘ultra-fine’ particles are under one micron (one thousandth of a milimeter) in diameter, yet extremely harmful to human health. The particles can penetrate the lungs and cause respiratory problems, and go into the blood and cause blood clots.

Barbeques are the cause

Poulsen identified a maximum of 300,000 particles per cubic centre by the DHL finish line, much higher than the 30,000 particle average on the main street outside the park. This means that the park contains more pollution than a four-lane main road.

The common barbeque areas where people often grill sausages had an average particle count of 250,000, suggesting that the barbeques are causing the particles to escape into the air.

It won’t stop me from running

Marie Bech Poulsen says that her research would not stop her from participating in the relay, pointing out that as a chemist and not a doctor, she cannot fully comment on the health effects of the particles.

“On one hand, running is a healthy activity, but on the other hand, you risk exposure to dangerous particles. All the same, it is a fun and social event, and I went for a run there myself the day after I took the measurements.”