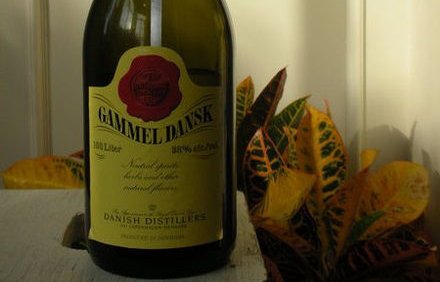 Alcohol is a good way to start the day
image: Wikimedia commons

Danes are a happy people. They do, however, have habits and laws that are bizarre and well, let’s face it, really stupid. This article was first published a year ago, but Danes haven't got any better!

Danes may look normal to the common foreigner. They brush their teeth morning and night, walk their dogs after work and know right from left. But look again—these people are strange. Here is a countdown of ten things the Danes do that are downright loony:

Mother always say breakfast is the most important meal of the day. But what would she say if she knew about the Danish tradition of getting a little tipsy at 9 in the morning? Some Danes drink a thick brown drink called Gammel Dansk with their rugbrød (rye bread, ed.) and coffee most mornings. They also believe that Gammel Dansk can cure some common illnesses. It is strong, bitter liquor made of 29 herbs, spices and flowers but the recipe is kept a secret. With the way it tastes, maybe you won’t want to know what’s in there!

Too much Gammel Dansk? Take a cold turkey at Alcoholics Anonymous. for help.

As if the Danes needed another excuse, there’s J-day. The J stands for ’Juleøl,’ and it’s a holiday that marks the tapping of the extra-special Christmas beer. Horses-drawn carriages lead beer kegs throughout the city and Danes wear ugly blue hats with fur on them. This year’s J-day is November 5th, so if you partake in this weird holiday celebration, be sure to train heartily—most beers are about 5.7 per cent alcoholic content!

8. Bats: can’t live with them, but don’t you dare live without them

In Denmark bats, or flagermus as they call them, are protected by law. That means that you cannot harm or kill a bat. If bats come in to your house and do not leave, you cannot poison or harm them. A family in Denmark once had to move out of their house for a year because they could not live with the bats, and could not get them out either. Bet they never thought a 3-inch rat with wings would steal their house.

7. Honk if you love a working car

Danish laws mandate that every time you start your car you have to check that it works properly. This is accomplished by checking the breaks, lights, steering and, oh yes, honking the car horn.
[Ed. this looks to be an urban myth: We have not been subsequently able to verify this!]

Do you have the urge to honk your horn even when you’re not in a car? Well calm the hell down, will ya? Here’s a link to some anger management techniques.

You may see Danes budging as the light turns yellow, but he is a fool indeed who crosses when the pedestrian light is red. Call it frugal—the fine for crossing a red light on a bicycle is about DKK 500—or call it Danish. Whatever it is, it’s weird.

Getting yelled at for crossing when it’s not your turn? Sorry to say, but you’re probably colourblind, you poor thing.

5. Swim with the spirit of the Vikings

Danes embrace the near-freezing water of the ocean, just like their ancestors the Vikings, some say. They may not be able to feel their limbs, but damn, they look authentic.

Everyone in Denmark knows that hot dogs are a very popular food here. On the surface of the hot dog, things look normal. You have your fried onion, ketchup, maybe even a little Remoulade. But beneath the common condiments lies something truly weird. Pickles. Sour cucumbers. It’s not only a tricky concept but also tricky in practice. It’ll be raining pickles by the time you bite into that delicious hot dog.

If this weird custom isn’t enough to keep you away from pickles, just look at the salt content! Danes, you better watch yourselves…

Ride down any Copenhagen street and you’ll hear a symphony of bicycle bells. Don’t be alarmed though—it’s just the sound of stress and anxieties being lifted from the shoulders of many a worried Dane in traffic. Ringing bicycle bells is a common form of stress-relief for Danish cyclists. So if you think that someone behind you is irritated with you, think again. He or she might just be ringing the bell to feel better. A lot of Danes even take the train outside the cities and bike through nature so they can freely ring their bells without distraction or distress. They don’t call it the happiest country in the world for nothing.

The bike bell not calming enough? Take your solitude to the next level with a train horn.

2. Know everything about the royal family?

Danish royalty are not only celebrities but demigods in Denmark. There are websites dedicated to them, TV programmes and even magazines solely about the Danish Queen, Prince Consort, Princes, Princesses and Crown Princesses. Mary, the Danish Crown Princess who used to be Australian, is one of the best dressed women in the world, so a lot of other newspapers, magazines and websites cover what she wears on different events. And if you don’t like her dress, the next train to Malmo leaves in ten minutes. Hej hej!

So what is our number one Danish weirdness?

1. Let your true colors shine through. But keep them inside

National pride is good…as long as it’s Danish. The Danes mandate that no other flag other than the Dannebrog (Danish flag, ed.) should be flown in the country. The only exception is if you also put the Danish flag with your own, but if you want to steer down that dangerous path, you must put the Danish flag up first and take it down last. Heed this warning, my dear international! The neighbours will be watching.

Your neighbours may be members of the flag-waving Danish People’s Party, so watch out!

Any ideas for ridiculous Danish customs or traditions? Write in the comment field below!