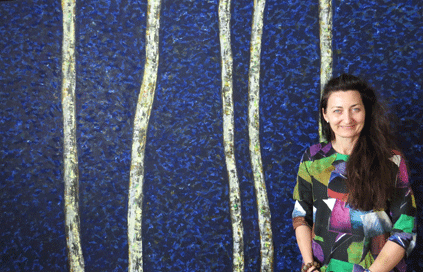 She knows a lot about how we know our physical location in the world.

Dr. May-Britt Moser, Nobel Laureate, sat down with the University Post to discuss her research into how the brain functions using specialized brain networks and the implications of her findings before her lecture at The Royal Library.

Nobel prize winner Moser on how the brain navigates

The grid cells responsible for giving the brain an internal GPS-like coordinate system are located in the entorhinal cortex, and together with the place cells in the hippocampus, are responsible for spatial navigation. Although scientists had previously researched this part of the brain where grid cells are found, they had never noticed the regular patterns formed by these cells because they had looked at a relatively small area, and could therefore, only see a small portion of the pattern.

“What we saw was beautiful regularity, made up of equilateral triangles. What is so incredible is that this was so deep in the brain and so far from the senses, but still the cells in the animal were responding so precisely, creating a beautiful coordinate system”.

When Moser and her colleague expanded the physical space where their rats were able to roam and removed other sensory inputs, the pattern the cells formed was quite pronounced, she explained.

Research from other scientists as well as phylogenetic evidence has confirmed that grid cells exist in other mammals, including humans. In fact, grid cells may play an even more important role in humans. While the hippocampus size generally increases with the body size of a mammal, the entorhinal cortex size tends to increase much faster as body size increases. “In rats, the hippocampus accounts for 10 per cent of the brain, and in humans, 1-2 per cent, so for us, the entorhinal cortex is much more important than it is for rats,” explains Moser.

The information collected in the entorhinal cortex is an input into the hippocampus, which is primarily associated with consolidating information from short and long-term memory. “For humans, it is not only necessary for the ability to create new memories, but also spatial navigation,” says Moser.

Although it is still unclear what causes degenerative neurological diseases such as Alzheimer’s disease, the size of the entorhinal cortex, as well as impaired sense of smell and cell death in the entorhinal cortex, have been used to predict the onset of Alzheimer’s disease. Moser is hopeful that continued research and scientific inquiry will help us understand what is happening in the brain to cause these cells to die.

“If we know what’s going on, we could go in before the brain is damaged. If we know where and why, it is easier to try to stop the cells from dying,” believes Moser.

Learned sense or not

May-Britt Moser’s talk in the Black Diamond entertained and captivated the audience. Moser touched on memory, dreams, and spatial navigation, and how they are related. She even showed, by playing recordings of the grid cells “popping” as the rats move around the room and while they sleep at night, that rats are actually replaying their memories of the days while they dream, but at a much faster frequency.

She also discussed whether the sense of direction is something we can learn or whether it is just something we’re born with. Through experimenting with different living environments in the early stages of the rats’ lives, Moser and her colleagues discovered that while other spatially modulated cells could be seen clearly at an early age, grid cells mature much more slowly, and the patterns they create become more clear with age: This has lead the scientists to believe that the development of this coordinate system can be influenced at an early stage through environmental changes. Their specific experiments in rats concluded that walls and corners are important for the development of these cells.

Although May-Britt Moser and her colleagues do work that has implications for human beings, their daily work primarily involves mice and rats. May-Britt stresses the importance of caring for the animals and giving them enough care and attention. “If the rats are not well, they’re not happy. If they’re not happy, they don’t move, and if they don’t move, we don’t get good data. This is good for me because I love animals,” says Moser.