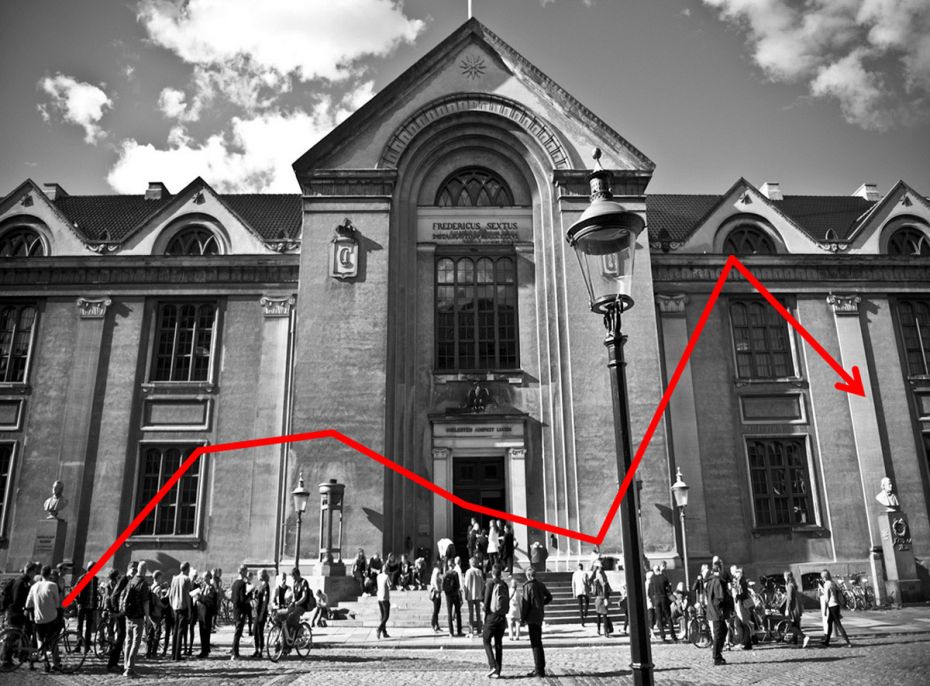 The University of Copenhagen drops from number 82 to number 120 in the world on Times Higher Education’s new ranking – surpassed by Aarhus as Denmark's best university. The explanation: UCPH reputation has been hit by cuts to research and education

The University of Copenhagen’s (UCPH) status on one of the most recognized international rankings, Times Higher Education World University Rankings, has taken a dramatic hit.

The Swedish Karolinska Institutet remains the highest Scandinavian university on 28th place, while UCPH is now only sixth in Scandinavia. Besides Karolinska, UCPH has now been surpassed by Helsinki, Uppsala, Lund and the University of Aarhus (number 98), which is now Denmark’s best university, according to Times Higher Education.

The cost of cuts

In a press release, Phil Baty, Editor of Times Higher Education World University Rankings writes that “the traditionally well-funded universities in Denmark and Finland are also already seeing signs of deterioration following large budget cuts in the past year. The universities of Copenhagen and Helsinki dropped 38 and 15 places respectively. ”

UCPH has this year cut DKK 300m from its budget, has cut 500 staff positions, and is to save another DKK 200m before 2019 as a result of the Liberal Party government’s savings in research and education.

Phil Baty predicted in March this year that the cuts would affect the University’s place in future rankings.

“In the longer term, UCPH risks a brain drain. And there is no money to offer international talent a tempting salary or adequate research and laboratory facilities,” said Phil Baty.

According to Ellie Bothwell, a journalist at the Times Higher Education who specializes in Scandinavia, the University of Copenhagen’s drop in the rankings is primarily due to the deterioration in the university’s international reputation.

The Times Higher Education World University Ranking carries out an annual survey asking more than 10,000 recognized researchers for their views on excellence in research and teaching in their field of study and the universities of which they are aware of.

“We can see that the layoffs and the cuts are beginning to have an effect,” says Ellie Bothwell.

She adds that another factor is that the competition to be among the 200 best universities in the world has become tougher, as Asian universities are on the rise.

Times Higher Education evaluates universities in the categories of Education (which has a weight of 15 per cent) , research (weight of 18 per cent) as well as categories such as number of citations, international outlook and cooperation with companies.

Read about the methodology and the survey here.

Anni Søborg, Vice Director for Education at UCPH, finds it hard to see a pattern in the University of Copenhagen’s ranking position.

“Last year we moved up 78 places, and this year we dropped 38 places back, so we don’t put much store in how it goes,” says Anni Søborg.

She adds that UCPH will look into the reasons for the sharp decline this year, and that it is in contact with Times Higher Education.

“We cannot do much more than ask for an explanation as to how they calculate the score that UCPH has received. We can see that we have fallen back on what they call ‘research volume and income’, but why is unclear,” says Anni Søborg.

Ida Auken, education and research spokeswoman for the Social Liberal Party, sees the fall of UCPH on the rankings as a sign that the consequences of the government’s cutback policies are now seriously beginning to show.

“It has consequences that the government for two consecutive years has cut back with the support of the Danish People’s Party. It looks like it will continue for the next three to four years. So this is serious, as it means that we cannot attract the scientists and students that will ensure that Denmark can make a living doing something in the future,” says Ida Auken.

The Social Liberal Party has in connection with the government’s budget presentation made its own proposal, calling it the ‘gift of a generation’ to our children.

It includes more investment in education, and a cancelling of the so-called re-prioritization contribution of two per cent for education in 2017.

Minister: Aarhus has not fallen back

Minister for Education and Research Ulla Tørnæs (Liberal Party) does not agree with the claim that the Danish government cuts are behind the UCPH drop in the rankings.

She points out that many different rankings are published, and that the University of Copenhagen in August was placed as the second best university in continental Europe on the Shanghai tables.

“It’s important to me that Denmark has world-class universities, and I can see that Aarhus University moves up on the Times Higher Education ranking. Aarhus University is subject to the same efficiency requirements as UCPH. This underlines the fact that there is no necessary correlation between efficiency in the university sector and placings on the different rankings,” Tørnæs writes in a reply by e-mail.