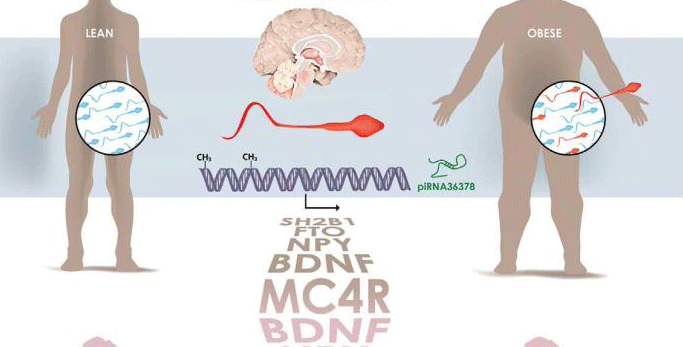 Spermatozoa from obese men carry a distinct epigenetic signature compared to lean men, in particular at genes controlling brain development and function. Slightly cropped image from the EurekAlert release that was the second most popular
image: Donkin and Versteyhe et al./Cell Metabolism 2015

University of Copenhagen science release about how the weight of men affects the heritable information contained in their sperm was second most popular on 'EurekAlert!' news service

The University of Copenhagen (UCPH) achieved the second most popular scientific article in 2015 on the science news alert ‘EurekAlert!’. This is according to data released by the news service that is operated by the American Association for the Advancement of Science (AAAS).

It was the UCPH story about how ‘Sperm carries information about dad’s weight’ that enticed readers.

A University of Virginia Health System news release describing the “missing link” between the brain and the immune system was 2015’s most popular, and most shared.

The UCPH story was from the Faculty of Health and Medicine Sciences and was published 3 December in Cell Metabolism. It reveals that a man’s weight affects the heritable information contained in sperm. The sperm cells of lean and obese men possess different epigenetic marks, notable at gene regions associated with the control of appetite.

“Our research could lead to changing behavior, particularly pre-conception behavior of the father,” says senior author Romain Barrès, an Associate Professor at the University of Copenhagen.

“It’s common knowledge that when a woman is pregnant she should take care of herself, not drink alcohol, stay away from pollutants, etc. but if the implication of our study holds true, then recommendations should be directed towards men, too.”

Romain Barrés explains the study and its implications in this article on The Conversation here.